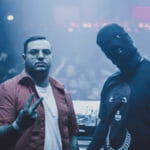 There were only a handful of IDs still left on the board from DJ Snake and Malaa’s second trip into the Secret Room from February 2021, including ACRAZE’s “Brooklyn” from our most-anticipated releases list. One of them has now received the green release light nearly a year later courtesy of both Keeld—who appeared on the latter’s Illegal Mixtape Vol. 3 tracklist—and Frents who partner up for the long-awaited deliverance of “Not A Test.”

“Not A Test” had remained a fan-favorite ID from the Pardon My French tandem’s stream from the moment it entered and isn’t the first time Keeld and Frents have crossed paths. Serving as a sequel to “Moving Up”—their Confession-hosted pairing from 2020—”Not A Test” brings the two Frenchmen back together for a trip through Tony Romera’s SANS MERCI with a rumbling convergence of bass- and tech-house.

The post Keeld, Frents reunite on SANS MERCI for delivery of long-awaited Secret Room 2 ID, ‘Not A Test’ appeared first on Dancing Astronaut.

Link to the source article – https://dancingastronaut.com/2022/01/keeld-frents-reunite-on-sans-merci-for-delivery-of-long-awaited-secret-room-2-id-not-a-test/

The hope was that “A Drug From God” wouldn’t make it onto Dancing Astronaut‘s most-anticipated IDs of 2022 list, and Chris Lake and Grimes—who goes…

To hold everyone over until the second leg of his “updated, definitive” Good Faith Forever show kicks off in early March—on top of his Firefly…

Honey & Badger has rightfully found himself as a tracklist staple throughout the latter half of the year, and he’s back once more to ensure…

The long-awaited and highly requested collaboration from Martin Garrix and Zedd has been on the horizon for quite some time, and today it’s finally here!! Maintaining a close…

After being away for three years too long, Carl Cox has announced his return to Montréal in 2022 for ELEVATION 001. Hosted at the Parc…