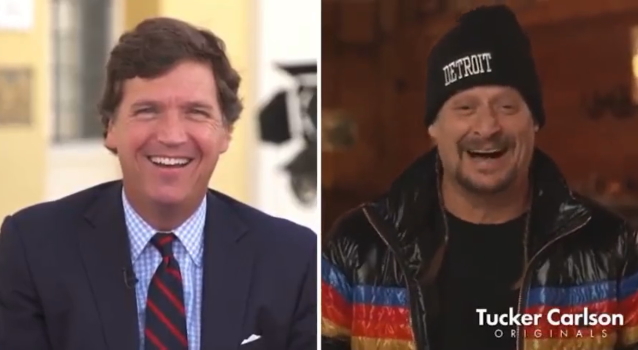 Over the weekend, the Fox News host aired a preview of his Tucker Carlson Originals documentary “The End Of Men” in which he interviewed physical trainer Andrew McGovern about how one can reverse the effects of falling testosterone. One of the solutions McGovern offered was red light therapy, which includes “testicle tanning.”

In the clip, Tucker defended the practice of shining a UV light on one’s genitals in order to potentially increase testosterone, saying: “So, obviously, half the viewers right now are, like, ‘What?! Testicle tanning, that’s crazy!’ But my view is, okay, testosterone levels have crashed and nobody says anything about it. That’s crazy. So why is it crazy to seek solutions?”

“Open your mind!” Carlson implored. “Don’t you think at this point, when so many of the therapies, the paths they’ve told us to take, have turned out to be dead ends that have really hurt people, why wouldn’t open-minded people seek new solutions?”

“I don’t know what the hell’s going on in this world,” Kid Rock responded. “I’m not even sure if I understood that question. But some days I just want to stop this planet and let me off.”

No release date for “The End Of Men” has been announced so far, but the first episode of the second season of Tucker Carlson Originals debuted on Monday, April 18, with new episodes dropping each Monday.

Tucker Carlson Originals is available only on Fox Nation, the streaming platform of the Fox Corporation.

Last November, Carlson, the most-watched Fox News host, released a three-part series called “Patriot Purge”, which, according to NPR, strongly suggested that the January 6, 2021 insurrection was not orchestrated by former president Donald Trump‘s fans but by his foes, including violent leftist Antifa groups and even the FBI and other national security divisions.

Next guest up for Tucker is Kid Rock, who seems befuddled by the previous segment on testicle tanning. Tucker tries to get him to take it seriously, but even Kid is confused. pic.twitter.com/UFowYYFvdZ

Link to the source article – https://www.blabbermouth.net/news/kid-rock-mocks-tucker-carlson-over-testicle-tanning/

Outspoken conservative rocker Kid Rock recently sat down with Fox News host Tucker Carlson for a rare one-on-one interview. According to a message on Tucker‘s…

Tucker Carlson, the host of Tucker Carlson Tonight on Fox News, has angered BTS fans with comments he made about the boyband’s White House visit.…

April 9, 2022 Kid Rock played a video message from his friend and golf partner, former U.S. president Donald Trump, during the kick-off concert of…

April 17, 2022 In a recent interview with Meltdown of Detroit’s WRIF radio station, TWISTED SISTER frontman Dee Snider was asked to name the biggest…