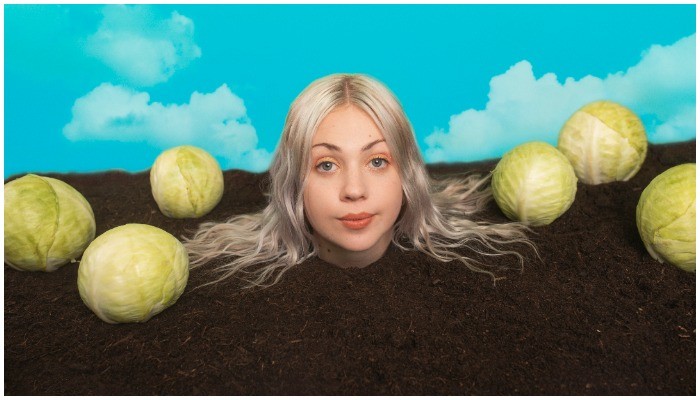 Rising alternative star Lauran Hibberd is proving why her music matters with her new EP, Goober, via eOne.

In a genre with so much competition for airwaves, Hibberd shines brightly with her refreshingly spunky sound and sarcastic lyricism. From “How Am I Still Alive?,” the indie-rock collab with Lydia Night of the Regrettes to the darker stylings of “You Never Looked So Cool,” there’s no question that Hibberd has made a personal yet fun EP.

Goober shows massive emotional and musical growth. While still holding true to the lo-fi, slacker-rock sound of her 2019 EP, Everything Is Dogs, it puts an emphasis on her evolution as an artist. With relatable themes, comforting instrumentals and exciting energy, Goober establishes that this 24-year-old isn’t going anywhere—and she’s only getting better as time goes on.

“I feel like Goober strongly signifies where I am now and drops hints at what’s to come,” Hibberd exclusively tells Alternative Press. “I guess it’s my last baby step before the debut album, so I think it highlights how much I’ve grown in confidence and how I have pushed myself into some new directions, musically.”

Another facet of Goober that proves she grows the more she creates is her lyricism. Hibberd has always had a knack for witty, relatable lyrics, but this EP takes a deeper and more purposeful lyrical journey while still retaining the fun-loving nature of her past work.

“There’s definitely a new energy in Goober,” Hibberd says. “Everything Is Dogs was very carefree, and it fell together by chance, which is funnily why it worked. I think Goober is a firmer stance of what can happen if I actually sit down and do nothing but write. I have done nothing else but zone in on myself as an artist for the last year, and working with Suzy Shinn [Weezer, Panic! At The Disco] on this has also been a game-changer.”

Read more: Lynn Gunn shares the one thing she wishes she could do over and more

Opening Goober is “Bleugh,” an energetic track that feels like you’re having a conversation with an old friend. In actuality, the song is a letter from Hibberd to her younger, more naive self. The speak-singing is also reminiscent of the stylings of fellow U.K.-based artist Baby Queen. Quirky instruments such as cowbells give the song character as it marches along to a steady beat. It’s equal parts therapeutic and nonchalant, and its title is the perfect word to shout when you’re feeling some type of way.

In “Old Nudes,” which Hibberd first shared in February 2020, the song tackles its somewhat sensitive theme with unfeigned confidence and humor (“He has a dirty photo of me/And he’s stored it on his iPhone 3/You can see it by the look in my thighs/Want you to send it to some bigger guys”). The lighthearted nature of both Hibberd’s vocals and her approach to the topic proves how adept her lyricism truly is. Weezer have been a key inspiration to Hibberd throughout her life, and the sarcastic “Old Nudes” is clearly the most Weezer-influenced track on the EP. This can be attributed to her collaboration with Shinn on this song and the rest of the project.

On “How Am I Still Alive?,” Hibberd and Night are a match made in alt-rock heaven. The song sees the two team up for a tune about the monotony of quarantine life (and Michael Cera). That’s right: The lyrics mention Cera as someone who gets them through their boring days. It was mixed by Rob Kinelski (Billie Eilish, King Princess), and its indie-rock perfection is taken to the next level with the seamless combination of Hibberd and Night’s vocals.

Darker themes circulate in the undertones of “Boy Bye,” on the surface a charming song about an unhealthy relationship. It’s a look into the inside of Hibberd’s brain as she battles her conflicting thoughts on both her relationship and her emotions. “Boy Bye” is her brand of slacker rock that you’ll want to always be playing in the background of your life. Similarly, “Crush” is another powerhouse indie-rock offering. It’s something you would expect to hear in a coming-of-age film. With rock riffs, a punchy beat and Hibberd’s sweet and savory vocals, it fits right in on the EP.

Read more: Amindi talks in-depth about her Nice EP and falling in love with herself

“You Never Looked So Cool” rounds out the six-track EP and is arguably the most personal offering. The song slows down, giving Hibberd’s crooning vocals the chance to shine front and center. While other Goober tracks have sarcastic lyrics or captivating beats, “You Never Looked So Cool” showcases the emotion behind the words. Hibberd exclusively told Alternative Press that even though the song is personal to her, she can’t wait to share it with the world.

“‘You Never Looked So Cool’ is definitely the track I’m most excited for everyone to hear,” she says. “It’s pretty dark for me, especially lyrically, even though there are still some comedic references. I fell down the stairs holding my amp a few years ago. [I] ended up in A&E on some crazy drugs to ease the pain and basically had a dream that I was at my own funeral. I woke up crying, recovered, then wrote a song about it the following week. It’s definitely that moment in the set when the slacker rock stops for a second and takes everyone by surprise.”

Link to the source article – https://www.altpress.com/features/lauran-hibberd-goober-ep-review/

Lowertown are showing their musical growth and maturity ahead of their upcoming EP in the brand-new single “Seaface.” Alternative Press is bringing you a first…

All Time Low have teamed up with Pale Waves to release “PMA.” The single was produced by longtime collaborator Zakk Cervini and serves as the…

In a new interview with “The Jeremy White Podcast”, TWISTED SISTER singer Dee Snider was asked why he allowed the band’s song “I Wanna Rock”…

As the UK lockdown edges nearer to a close, you will be thinking ‘what summer festivals can I make it to’. If you’re passionate about…

Suzy Shinn had been working with Weezer as an assistant engineer for more than six years, though she never expected to get called into the…