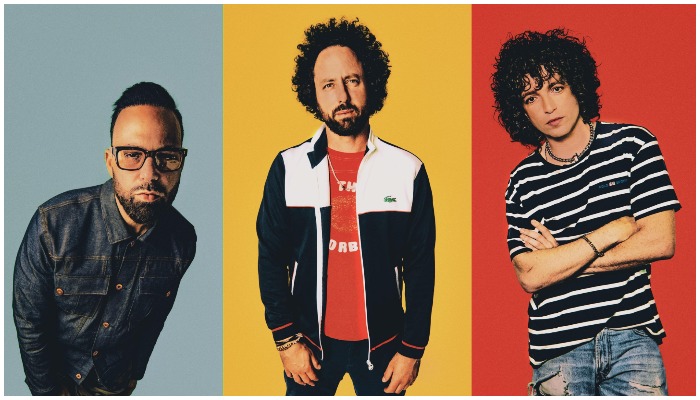 Indie supergroup Left Field Messiah—composed of Steve Bays of Hot Hot Heat, Jeremy Ruzumna of Fitz And The Tantrums and Erik Janson, formerly of Wildling—are back with the music video for “Feels Like Summer,” which they’re exclusively premiering with AltPress.

The trio started working together in 2020, combining their veteran tastes, experiences and backgrounds into one nostalgia-inducing adventure—laced with blossoming synth lines, relaxed guitar licks and Bays’ signature dreamy vocals. “Feels Like Summer” may be your soundtrack for the next few months, with its upbeat dance rhythms and just a hint of melancholy. The complex nature of the music makes this song a must-add to your June playlist.

Read more: 8 essential solo and side projects started by your favorite alternative artists

Prior to releasing this single, LFM put out “AM Moonlight,” “Young Libertine,” “Classic Feeling” and “Fuzz Machine.” All of these bright tracks brimming with ’80s influences will appear on the group’s forthcoming debut album, In Praise Of Bombast, available on DSPs June 18.

Check out the new music video below. Additionally, you can read an exclusive interview with frontman Bays on the upbeat single, the creation of the trippy “Feels Like Summer” visual and much more.

So, when you three met at a songwriter’s workshop, how did you know that you were a good collaborative fit for each other?

I could tell that both of their instincts were really similar to mine. I loved every single thing they played. And then they both came to the session with a bunch of cool pedals and keyboards. They were into things that made things sound lo-fi. So, you play a few chords that you’ve heard a million times, but you run it through this old film projector and, all of a sudden, it sounds like you’re in the 1960s or something. They were both super chill, and they both had a lot of drive but not in a narcissistic, sociopathic, “I need fame” kind of way. They just genuinely are such fans of music, so their drive is to try and make great stuff.

You all come from indie band backgrounds and have found major success with previous projects. What is different about this project in terms of the creative process, time spent writing, etc.?

We just do things exactly the way we want to do them and we make every step of the process enjoyable and to see if if it can somehow get out into the world without all the typical sort of ways to market yourself. So, everything is an excuse to do something weird and fun. There’s this benefit of that comes with being OK if something doesn’t succeed, which I think that’s where we’re at.

We want the music to get out there because we’re so excited about it. If it doesn’t succeed, we’re going to keep doing what we do because it’s our favorite thing in life. There are so many ways for your attention to be grabbed in 2021. So I’ve always just been like, “Well, what’s the rush?” Art is never finished, only abandoned. But we should all agree, “OK, we’re ready to abandon this and move on.” That may not be the typical timeline, but I would rather just always have a unifying flavor and feel to everything we put out.

So, how did this single come together?

Because they live in L.A. and I’m in Vancouver, we would just have these short little writing sessions where we would do one or two songs. The writing and recording part has always been really fast for us. It’s more like the building of [a] chunk of clay. It’s been just super fun, natural [and] easy. And then how we sculpt that into what it becomes is the thing that we tend to drag our feet on. I was there for three nights, and the first two days we did “AM Moonlight.” We wrote and recorded it in one day, and it was basically complete the next day, including mix and everything. And then [for] “Feels Like Summer,” we were so excited about “AM Moonlight” that we weren’t really thinking like, “Oh, we need to write a second time before you go home.” But it was just like a magical time there.

We were staying at Jeremy’s place, magazine cutouts [were] all over the place and we were like, “We need to do a band photo.” Right before I had to catch my flight, we were just working on it right up until I left. We set up the camera on a tripod, got a little band photo and Jeremy and Erik were like, “Wait, we need a bridge.” So I sang the bridge seconds before I walked out with all of my bags. I was just like, “Oh, I hope it’s OK.” [Laughs.]

What made you decide that “Feels Like Summer” was the right single to drop ahead of the album?

You always have the songs that are your favorites. Then you have one that people react to, and they’re not always necessarily aligned. I loved “Feels Like Summer,” but I didn’t think of it as necessarily a single at the time because not every song can be a single. Everyone that I played it for would come back and be like, “I’ve had that song in my head constantly.” And even the singer of Said The Whale, Tyler [Bancroft], said, “You played me ‘Feels Like Summer’ once a year ago, and I’ve been singing ever since.” It’s nice when the responsibility to choose what song you put out next is taken off the table because it’s hard. Every song is your baby. And it’s hard to say, “This is my favorite baby.” [Laughs.]

How did the video come together into its final psychedelic and colorful form?

This video was the result of exploring a variety of visual curiosities, 17 hours a day, for 10 days straight. All I knew was that I wanted it to look like a moving version of one of the collages I’ve made for our singles and album art. I had some casual phone-shot green-screen footage from all of us, but everything else had to be created out of [the] footage [that] I’ve collected from corners of the internet. I then manipulated [it] over and over till it looked like something I could call my own.

Similar to how I collect magazines to later use for art, I also collect video files of miscellaneous subjects and textures that I feel might come in handy one day. The video is an assortment of moving images that fit the Left Field Messiah aesthetic. The result is layers on layers of old TV screens, damaged film stocks, ripped newspapers and digital scan lines. I blend that with our phone footage, along with trippy ’80s video synth effects that I make using DJ video remix software, over-processed through various other apps. I begin to create a landscape. Once I have a bunch of interesting things created, I then spend days rearranging them in different positions and movements until they begin to tell a story.

Link to the source article – https://www.altpress.com/features/left-field-messiah-feels-like-summer-music-video/

What happens when you take the basics of dodgeball, add in some of what makes Rocket League so addicting, and mix it with a retro-futuristic…

Indie-rocker Aidan Bissett wants people to start talking to each other again in his new song “Communication,” exclusively premiering with Alternative Press.  While both the…

Over the last year, artists have found creative ways to fill their time and connect with their fans. With time and space to either work…

It’s hard to form a band that’s going to stand the test of time. Having a big hit is one thing, but launching an act…