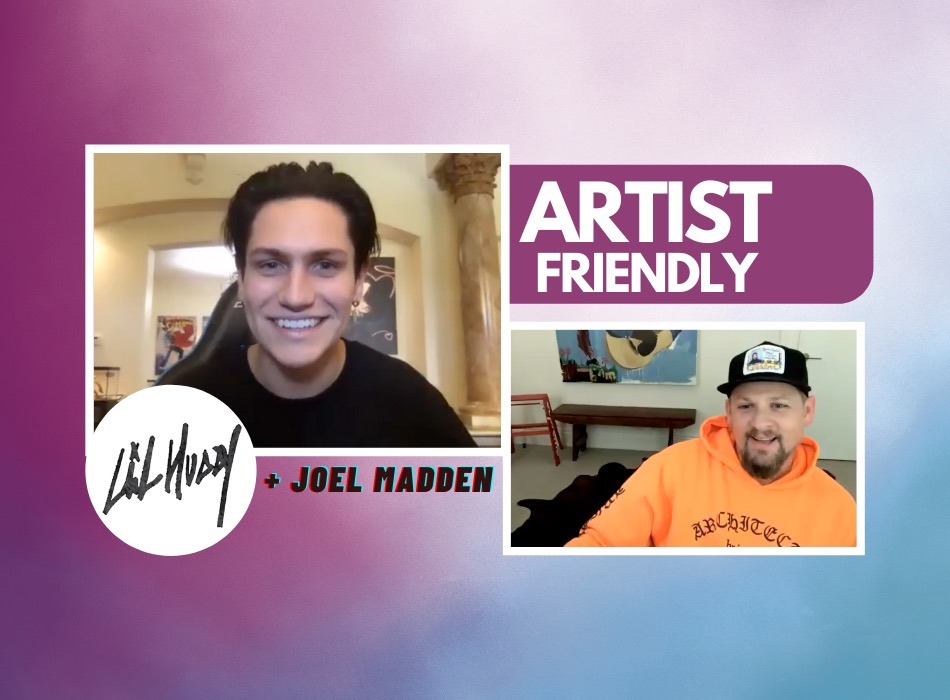 At 19 years old, LILHUDDY has already managed to become one of the most recognizable figures in today’s pop-punk revival.

In September, LILHUDDY released his debut album, Teenage Heartbreak, consisting of singles such as “21st Century Vampire” and the collaborative track “Don’t Freak Out” with Travis Barker, iann dior and Tyson Ritter.

Read more: LILHUDDY started on social media and arrived at the main stage

In the latest edition of Artist Friendly, Joel Madden talks with the rising artist about his musical journey and dealing with criticism revolving around his strong connection to social media. They also discussed his recent digital cover interview, where the young star opened up about his staggering success.

Read a preview of the interview and watch the full video here or below.

How was the AP shoot?

The Alternative Press shoot was really cool. It had a shitload of really sick clothes, and then I brought a little bit of a combination of my jewelry [and] my shoes. It reminded me of that ’90s skater aesthetic that I really fuck with. I wear a lot of really crazy shit and accessories, but I also like to chill out and wear little band and horror movie tees or whatever. [The shoot] had a lot of that kind of a thing, which I thought was cool!

It’s cool you’re doing that, and it’s exactly what we were doing back in the day. When we had photoshoots, we were just throwing all this shit together. When did things start to pop off and get a little crazy?

Well, I’d probably say like a year-and-a-half [ago] because the first person in the music industry I met was at Interscope. I had never been to a studio in my life or met anyone in the music industry. I just went in there, almost like blind date-style. My manager is just like, “I’m going to bring you here, where you’re going to meet this person, and then you’re going to tell him your vision.” They just believed in it, and it was like, “OK, I’ll give you this much time. Go into the studio, have some fun and report back to me.” So I started making a bunch of music, and then they’re like, “Holy shit, I think you should keep going! I really want to make an album for this kid.”

Then, just like that, I was signed to Interscope. I had a concept album that I was working on, and I just really just dove straight into it, headfirst. We wrote half of the record in a week-and-a-half. The first four singles that I had put out—not including “Don’t Freak Out“—“America’s Sweetheart,” “21st Century Vampire” and “The Eulogy Of You And Me” [I wrote] in [a] consecutive three days. The single that was going to be [the] fourth, but is now the fifth, is “Partycrasher.” I wrote that back to back. We were just going after it, knocking the songs out. I’d been in the studio for maybe two months, and it was like a night and day kind of a thing. The first couple of songs was just like, “I don’t really know yet.” I got to figure myself out, but I was driving for it and really wanted to get it all done. I did my first album in probably three months.

That’s awesome. That’s how it should be, though, because when it’s good, it just goes. As long as you love it, that’s always the compass. I think you’re going to be around for a very long time. Especially now, [the music scene] is crowded, but it’s still the same. You just have that feeling, and you probably have that feeling about yourself. You have to, right?

I definitely believe in myself. I have such a love and passion for [music] and already love to plan things down the line. I’ve been planning [on] doing music since I showed up to L.A., and I didn’t know nobody. It took me two years to meet one person [in the music industry].

Yeah, I was like, “Do these people hide? Where are they? Where did they go?”

L.A. is weird because there’s a surface level where you can go out and meet people. When you get beneath that and meet the real people that are all living, working and building lives here, it starts to unfold. You start to really have a life here, where you have people and resources around you. So, what’s the hardest part?

I did social media before I jumped on the music. A lot of people just look at me like, “OK, he’s cool, but if he really wants to stick around, he’s got to really fucking prove himself. We’re going to make it harder on him because he didn’t start off as this day one musician. Already off the bat, people have this weirder [attitude] around me. [People are] like, “Oh, I don’t know. He did social media.” People are giving me a harder time with collaborations and are going to be weird.

The post LILHUDDY and Joel Madden on new-era pop punk and owning who you are appeared first on Alternative Press.

Link to the source article – https://www.altpress.com/features/artist-friendly-lilhuddy-joel-madden-interview/

Born Michael Ian Olmo, the artist launched his career on SoundCloud — a trajectory not unlike the one taken by stars such as Post Malone,…

Last week, Avril Lavigne celebrated her debut on Travis Barker’s DTA Records with the release of the single “Bite Me.” In a recent interview, the artist…

Ho99o9 have returned with a new song called ‘Battery Not Included’, which was produced by Blink-182 drummer Travis Barker. The duo – comprised of theOGM…

From busking in the streets to being crowned as the winners of Eurovision Song Contest 2021, Måneskin has grown to become one of the hottest…