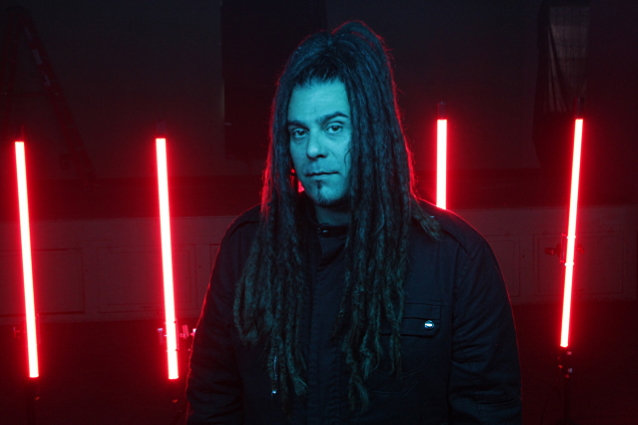 In a recent interview with RadioactiveMike Z, host of the 96.7 KCAL-FM radio program “Wired In The Empire”, former ILL NIÑO and current LIONS AT THE GATE singer Cristian Machado was asked about his introduction to the music of METALLICA. He said (as transcribed by BLABBERMOUTH.NET): “My introduction to METALLICA was ‘Master Of Puppets’. I remember living in New York City. My Polish cousin, ironically — I’m a Latino, but I have a small part of my family that’s from Poland — he had visited our family from Poland. And apparently, I learned that day that in Europe, and especially in Eastern Europe, they’re on to underground metal way earlier than Americans are. Back then in the ’80s, Europeans and Eastern Europeans were on to the metal bands way before America even exploded it. And he had come down and he took me to a record store and ‘Master Of Puppets’ was one of the albums that he bought that day. And I’ll never the listening experience that I had; to my ears, it was out of this world, it was almost alien and I was attracted to it immediately — immediately.”

He continued: “One of my favorite METALLICA songs is definitely off ‘…And Justice For All’, ‘Dyers Eve’, which I always felt was such an extreme METALLICA song that always felt just next level for them. But the ‘Master Of Puppets’ album is what holds a true place in my heart as a METALLICA fanboy in my early age.”

When RadioactiveMike Z opined out that there isn’t a weak song on “Master Of Puppets”, Machado concurred. “Absolutely,” he said. “And even till the end, with songs like ‘Leper Messiah’ and things like that, they just drilled the nail so hard on that album; they didn’t lose focus, every song was intentional and intense, and they sounded their own. They had their own sound at the time in thrash metal, and I think that still continues to be something that’s important in music.”

LIONS AT THE GATE will make its live debut on April 28 at the legendary Whisky A Go Go in West Hollywood, California. Support at the show will come from THROWN INTO EXILE and BREAKING IN A SEQUENCE.

LIONS AT THE GATE released its debut single, “Not Even Human”, back in June 2021.

The band’s upcoming debut album was produced by the Kile Odell, who has previously worked with FOZZY and MOTIONLESS IN WHITE.

Link to the source article – https://www.blabbermouth.net/news/lions-at-the-gate-ex-ill-nino-singer-cristian-machado-on-hearing-metallica-for-first-time-i-was-attracted-to-it-immediately/

September 19, 2022 LACUNA COIL‘s Cristina Scabbia joined LIONS AT GATE on stage this past Saturday (September 17) at the The Gramercy Theatre in New…

ILL NIÑO‘s longtime bassist Laz Pina says that he “wasn’t impressed” with the sample of music he has heard from LIONS AT THE GATE, the…