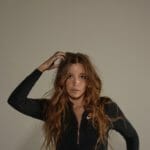 This quote from late New York City artist, painter, and DJ Jean-Michel Basquiat resonates across a recent conversation Dancing Astronaut had with one of the most magnetizing artists currently on the rise, LP Giobbi. For International Women’s Day, we sat down with one of the top Artists to Watch in 2022, co-founder of non-profit FEMME HOUSE, and a driving force behind women and gender-fluid producers, to ask how she feels electronic music is giving women the opportunities to decorate this moment time more than ever.

“I actually think the time is ripe,” LP shares excitedly. “If you are not a male, get in this industry. All the really big gatekeepers in this industry are starting to pay attention. We still have a ton of work to do, but this is a great time. We are starting to build our own communities, and the people who are outside of those communities are realizing they need us. It’s the best time for us to be alive, and I am fired up about it.”

Identifying as a feminist just as much as she identifies with being a producer and DJ, Giobbi’s belief system lies firmly rooted in the necessity of intersectional representation across stages, lineups, charts, and more.

“Seeing yourself in a role makes you think you can believe it and you need that first and foremost, that’s the first thing you need is belief, it’s the most important currency.”

As co-founders of FEMME HOUSE, LP Giobbi and Lauren Spalding, along with their newly recruited Board of Directors which include renegades like Spotify’s Head of Dance and Electronic Development Ronny Ho, Grammy’s Head of Pop and Electronic Shannon Herber, and Head of Elrow North America Michael Julien, to name a few, have made a concerted effort to shake the dance music industry’s largely male gatekeeper status quo. “The gatekeepers have to be the ones who make the real change, and all the gatekeepers right now are white dudes,” asserts Giobbi.

Launched in 2019, FEMME HOUSE has already made tangible and unprecedented strides, a small few of which include creating She Is The Producer—a free production bootcamp in partnership with Alicia Keys and Ann Mincieli’s She Is The Music organization, aligning with Emily Lazar’s We Are Moving The Needle, which advocates for creating space in the recording industry for women, kicked off an online academy featuring comprehensive online courses on music production for more than 3,600 people, offering BIPOC (Black and Indigenous People of Color) scholarships with incredible benefits—and this only scratches the surface.

Most recently, FEMME HOUSE has been hosting free production workshops for each of the stops on LP Giobbi’s headlining North American tour, led by certified Ableton Live trainers. The Los Angeles-based multi-hyphenate expends just as much energy pushing against grain of the industry’s “boy’s club” atmosphere, recalling instances in which many of her male peers describe networking on a golf course, for example, exchanging connections between drives. Giobbi likens the goal in this particular workshop, and FEMME HOUSE’s overall impact, to a metaphorical golf course of sorts; chiseling out an intentional platform for women and gender-fluid individuals to elevate their sound, spirit, and careers, while operating within comfortable, safe, and transparent networking spaces.

Raised by two dedicated and loving Grateful Dead loyalists, cultivating a strong community has surged through Giobbi’s veins since she attended her first Dead show while still in the womb. While the vast and variant Deadhead community comes unrivaled by most other collective musical zealots, when one look at dance music and 60s and 70s jam band culture under a microscope, the two are not so different, LP reflects,

It wasn’t until her parents gifted her 80+ of their vintage Dead t-shirts that LP coined her signature style on stage—the tie-dyed, loose-fitting garb transmuting easily with her buoyant dance moves and undeniable vivacity for the music. Before launching her career as a DJ, Giobbi recalls her styling swinging in a wildly different direction. “I used to be really, really feminine. I threw these like gay, queer, crazy disco parties, and every single party, I bought a brand new [sic] wild ball gown, and I would resew it to be like crazy and sexy and feminine, like a goddess. And then I became a female producer.”

She goes on to begrudgingly to admit, “I knew that if I was gonna be taken seriously as somebody who actually made their own music, I had to look like a man.” She continues, “I say that to [illustrate] how sad that [is] in our culture and how far behind we are and how much more work we have to do. But I also think that there are women that can dress like that and continue to crush it. I think anything is possible.”

A masculine ensemble is certainly not a requisite for all aspiring DJs who identify as women—even LP herself can accredit her girlish style for her being discovered while playing to a nearly empty room by none other than now-best friends Sofi Tukker. Through reminiscent giggles she tells Dancing Astronaut, “I was wearing a crop-top and [studded] pants when I met Sofi Tukker and they were like, ‘come on tour, we love your outfit!’” But as LP’s career progressed, in her experience, femininity became more of a setback than a good luck charm. “We’re just not culturally there yet…It’s so much bigger than me. I’m like trying to fight one battle at a time, and I think that if I get my platform in a place where there’s some credit, then I can actually make some change on it.”

Growing her platform is exactly what Giobbi plans to do, aiming her sights on the loftiest benchmarks, namely a FEMME HOUSE festival, FEMME HOUSE label, FEMME HOUSE management company, and most importantly, giving plenty of stage time to more people who deserve to access it. For female-identifying folks that feel like no amount of time or energy is effective enough to fulfill their own lofty goals, therein lies a salient message that LP reminds DA can be easily overlooked once a certain level of success is achieved.

“There are a thousand times where [success] didn’t flow into my life [effortlessly]. In that moment of flow, there were first years of not the flow…In interviews no one is going to talk about the times it didn’t happen for them. I do believe in manifestation, I do believe in dream boards, I do believe in putting out what you want to receive back in the world. I also believe in persistence.”

On International Women’s Day, Basquiat’s words echoing across a galvanized, energized, and forward-looking conversation with one of the most compelling emergent acts on the scene, proved that we can choose how we decorate the times ahead of us, and the outlook, at least from where LP Giobbi stands, is quite bright indeed.

The post LP Giobbi talks International Women’s Day, decorating the future, and carving out a space for everyone [Interview] appeared first on Dancing Astronaut.

Link to the source article – https://dancingastronaut.com/2022/03/lp-giobbi-talks-international-womens-day-decorating-the-future-and-carving-out-a-space-for-everyone-interview/

Back in October of 2021, Chris Lorenzo bestowed his rework of The Mamas & Papas’ historic hit, “California Dreamin,’” upon his exhilarated fan base. Cut…

In celebration of her headlining North American tour, LP Giobbi is kicking things off with a surprise remix of Ferreck Dawn‘s “Back Tomorrow,” released via…

by: Sami Weisband Apr 10, 2022 LP Giobbi‘s production pace has proven to be that of an unremitting character in 2022, between her FEMME HOUSE…