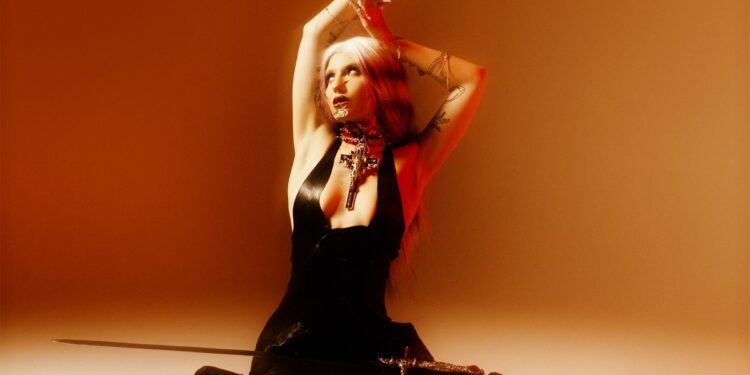 Anyone who follows Lucille Croft is aware of her affinity for leather, and she’s finally written and released a song as an ode to the iconic fashion material through the ages. “Bury Me in Leather” is the second single off Lucille’s upcoming sophomore EP, The Valentine Effect.

The song contains many elements from her musical influences, including Nine Inch Nails or The Prodigy. 808s and minimal techno and vocals, plus a little drum & bass at the end to add a significant edge to it all.

Lucille says of the song, “BMIL might just be my favorite song I’ve made to date. It entails all of my favorite things – leather, blades, pleasure, 808s, a little drum & bass. I’ve been using my voice more in my music so I can better bring the characters in my songs to life, and I really love the persona in this song.”

She continues, “[The persona] evolves into something more than human, she’s not really dying, she’s just becoming something more than her human body. The idea ‘let me rest in pleasure’ came to me years ago – I began to think about death differently. I’d much rather rest in ‘pleasure’ than peace, and be celebrated for my time here rather than mourned for being gone.”

Check out the single below and stay tuned for The Valentine Effect, releasing in just a few weeks!

Link to the source article – https://www.youredm.com/2023/01/25/lucille-croft-expresses-her-love-for-leather-in-latest-ep-single-bury-me-in-leather/

Lucille Croft isn’t afraid to reinvent herself — and the producer’s newly released, debut body of work does just that. The 5-track EP introduces Patient X — one of…

Matthew Meadow Lover of all bass music. I’m not afraid to speak my mind and put it to paper, and I do it often. I…

Deadmau5’s mau5trap has historically championed variations of house and techno, but we know that the head honcho appreciates good music in any of its forms…

Calvin Harris is hitting a few US festivals this year, including Coachella which announced yesterday, as well as Hangout Fest in Alabama in May. He…