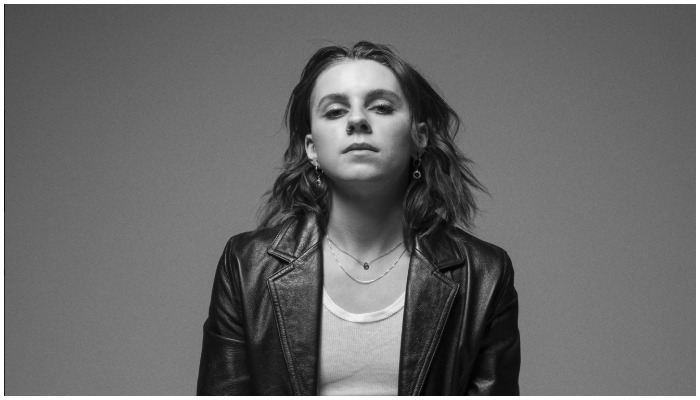 PVRIS’ fearless leader Lynn Gunn ponders genres, the best-ever fan-dad interaction and comes clean about what she really wants a do-over on.

There’s something pretty magical about an old, worn upright piano—if it’s tuned and maintained. Makes for some great ideas. Or maybe a harp. If I had one around, I know I’d force myself to learn it. [Laughs.]

IF GENRES ARE STILL A THING.

In some ways, yes. Others, no. I think putting artists into specific genres is starting to be defined less on the instrumentals [and] production and being defined now through the culture, mindset [and] methods they’re created in. So many “genres” are being mixed and combined to create entirely new soundscapes that really blur the lines and make them hard to pin down. I think in each of those, there are specific threads—in the community, collaborators, etc.—that the idea and specifications of what makes a “genre” seem like it’s being reimagined.

In a perfect world, we’d just listen to music and not have to think about where it “belongs.” I still think compartmentalizing and categorizing is human nature, so it’s a hard thing to break. But it can be extremely hindering, not only for artists but for listeners. Music should be able to exist on its own terms.

IF MUSIC WASN’T AN OPTION.

There are a lot of things I’d love to try even while music is an option. I’ve always been heavily involved, when allowed, in our creative direction—music videos, graphic design, merchandise, album artwork, photos, etc.—so that would be a fun overall pursuit to creative direct for other artists or even just different brands or companies. I think any other creative pursuit, leaning in the visual world, would be the other option.

THE DAD JOKE YOU ACTUALLY LAUGHED AT.

Ha! It was my actual dad’s joke. He’s pretty old school and present in real life, so he doesn’t use his phone or text often, but usually once every few weeks while I’m away, he’ll send me a really funny text. The last one he sent was: “Just saw a road work sign on the way home that said ‘Be prepared to stop.’ If I’m not prepared, should I not stop? Just wondering.”

THE TIME YOU GOT REALLY ANGRY ONSTAGE.

Anger is hard to think of, but I have no problem finding frustration, and that was with myself. I was working through a lot of vocal issues for pretty much the entire touring cycle for our second record [All We Know Of Heaven, All We Need Of Hell]. [I] had to get up onstage every night with a voice that could only really do 20% of what I’m normally capable of. Some nights were brutal. I got so mad at myself onstage, but I tried my best to hide it. It was one of the most challenging and frustrating things to work through, but it taught me so much, and I’m very grateful for what [I’ve learned].

THE PLACE YOU HAVE YET TO VISIT.

I’m dying to go to Iceland. One of my friends went recently and said it was truly magical. Egypt is on my list, too. I was fascinated with ancient Egypt as a kid and still have a strange affinity toward it.

THE BEST MEAL YOU EVER HAD.

Brian [MacDonald, bass/keyboards] and I strive to eat a delicious meal wherever we are in the world. We make it a priority in every city to find great restaurants. But recently, one of the best meals I’ve had that really stood out was at my friend’s home: It was just a bunch of assorted grilled veggies and rice, but it was seasoned so well and made with so much love. You could honestly taste it.

THE THING YOU RECENTLY WITNESSED THAT MADE YOU THINK THE WORLD IS GOOD.

I try to see it every day. Even down to the smallest things. Simply smiling to a stranger you’re walking past or having a lighthearted exchange with a barista [or] waiter. Even simply getting onstage and looking at the crowd some days, the fact that hundreds of people can gather together and be unified by something that gives them joy—music—and exist peacefully and be unified in those environments, for the most part, is a clear sign of that.

I think at our core, we really are good at heart, and all we want is to connect with each other. Some of us are just harder to crack [and] more cautious than others. I think a lot of people have a hard time looking away from their own struggles to even notice [that] witnessing the good has to start in your own self a lot of the time.

THE MOST AWESOME FAN INTERACTION.

It was actually the most awesome interaction with a fan’s dad! We had a long flight to Belgium one day. A fan’s dad was one of the flight attendants and recognized us and upgraded our entire band and crew to first class. It was a godsend because the night before, some of us had to drive from New York City to New Hampshire and back overnight because we’d forgotten a legal document that we’d need at customs when we arrived in Belgium. Everyone was a bit sleep-deprived and about to board for a six-plus-hour flight, so we were extremely grateful for that.

My style, hair and makeup choices from the entire White Noise era. Seriously. Insert [the] world’s biggest facepalm ever. I don’t know what I was thinking. I cringe when I see old pictures sometimes. [Laughs.]

This 10 Topics interview appeared in issue 374.

The post Lynn Gunn shares the one thing she wishes she could do over and more appeared first on Alternative Press.

Link to the source article – https://www.altpress.com/features/lynn-gunn-10-topics-interview/

10 years on from my first release…  has the industry really changed? It has just ticked over 10 years since we released ‘Half Of It’,…

Despite growing up on radio-edited pop music before being introduced to grunge, electro-industrial and the iconic drumming of blink-182’s Travis Barker, Cameron Cade, aka Halo…

PVRIS are set to perform their third album ‘Use Me’ during a forthcoming live-streamed show. READ MORE: PVRIS: “Sometimes you’ve got to have the power –…

Catching up backstage at Reading Festival… “I love meeting people,” says Niko B. “I just feel like whenever I meet someone for the first time,…