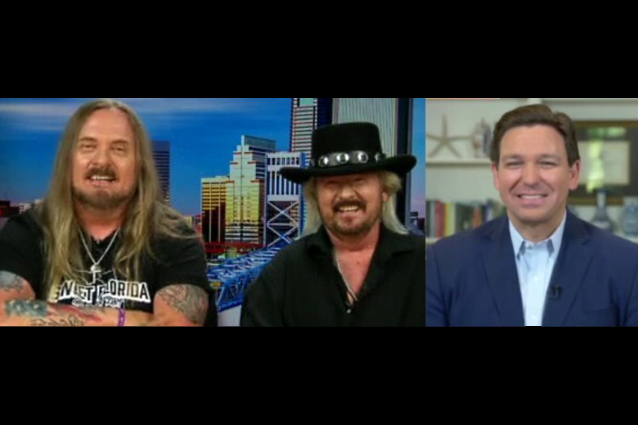 Earlier today (Friday, April 1), Johnny told Fox News ‘ “Fox & Friends” that DeSantis stands for everything that he and his brother, who were born in Jacksonville, believe in.

“We got to thank Governor DeSantis for standing and believing for what he believes… He’s been a great governor for us,” Johnny said. “He stands up for what he believes. So don’t come down here trying to change things we’re doing all right in the Sunshine State. Stay out of our business. Leave our governor alone. Down in sweet, sweet Florida our governor is red, white and blue… He’s shooting us straight, telling us the truth.”

The “Sweet Florida” lyrics by Johnny and Donnie also hit out at U.S. President Joe Biden and the nation’s top infectious disease specialist Dr. Anthony Fauci, saying, “You can take it to the bank, he don’t care what Brandon think at the White House,” using code for an expletive-laden chant. With regard to Fauci, the song says that DeSantis “is taken on the swamp and he’s calling out Dr. Fauci.”

“We really wrote it…in a couple of hours, and we recorded it on an iPhone and sent it to the governor,” Johnny explained. “We’ve never done that before…and we took a chance.”

DeSantis, a Republican who is running for re-election and is widely considered to be a potential 2024 presidential candidate, suggested a song about his state modeled on the LYNYRD SKYNYRD hit “Sweet Home Alabama”.

“We really appreciate you guys doing it,” DeSantis told the Van Zant brothers on “Fox & Friends”. “I think it’s really, really special. They did a great job, and it is a catchy song.”

“Sweet Florida” is available on Spotify and Apple Music and the music video can be seen on SweetFloridaSong.com.

Last month, DeSantis said his state is “leading the free world,” with backers of his often controversial policies viewing Florida as the new “citadel of freedom.”

DeSantis has repeatedly attacked Biden and his administration’s coronavirus response, going so far as to single out Fauci by selling “Don’t Fauci My Florida” campaign merchandise.

Thanks to Johnny & Donnie Van Zant. I have a feeling this might be the song of the summer…https://t.co/FzrPTkCfs9 pic.twitter.com/k6rk48tzq8

Link to the source article – https://www.blabbermouth.net/news/lynyrd-skynyrd-and-38-special-members-record-campaign-song-for-florida-governor-ron-desantis/

The Florida house where Lynyrd Skynyrd rock legends Ronnie, Donnie and Johnny Van Zant grew up is on the market for $629,000. The home in…

Iconic southern rockers Lynyrd Skynyrd will apparently retire from touring over “the next year or so,” according to the band’s frontman Johnny Van Zant. Though…

Lynyrd Skynyrd singer Johnny Van Zant has confirmed that the classic Southern rock act is set to retire from the road. “We’re still looking at…

April 7, 2022 Ted Nugent has defended Florida’s controversial new “Don’t Say Gay” law, saying that it is about giving parents “the right to guide…