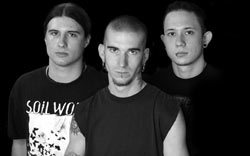 Today, Steel City’s Malevolence are proud to release their blindsiding new studio album, “Malicious Intent.” Dubbed early on as the year’s most hotly anticipated metal record, it marks their most singular work to date, staking their place amongst metal’s heavyweights.

In celebration, Malevolence have revealed their fourth and final single from the record – a coup de grâce titled “Salvation.” The track features Matthew K Heafy, who lent his legendary talents to both vocal and shredding duties.

“We would like to thank everyone who has pre-ordered a copy of the album a million times over. Your continued support means to the world to us.

“We would also like to thank our team behind the scenes for helping deliver this album, including our family, friends, Nuclear Blast and 5B Management.

“This is a monumental moment on our path to global domination, we hope you enjoy the album!”

Link to the source article – http://www.metalunderground.com/news/details.cfm?newsid=153441

Your favourite band are right back at it again. Malevolence have revealed the details of their new album, the follow-up to their 2020 EP ‘The…

Nuclear Blast is pleased to announce a global partnership with Steel City shredders Malevolence, in cooperation with the band’s own MLVLTD label. Following several blistering…

Trivium vocalist/guitarist Matt Heafy’s side project Ibaraki premiere their debut single and video “Tamashii No Houkai“. The track was co-written by Ihsahn of Emperor. Explains…