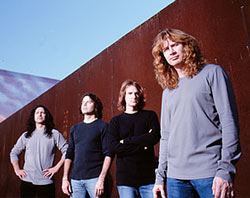 In a recent interview with SiriusXM, Megadeth vocalist/guitarist Dave Mustaine confirmed that the band’s new album, “The Sick, The Dying… And The Dead,” will be released on July 8th of this year. In addition to this, Mustaine revealed that veteran bassist Steve DiGiorgio of Testament and Sadus (also formerly of Death, Iced Earth and Autopsy) handled the bass duties on the record. More details on the album will be revealed as soon as they become available.

The tour dates are as follows:

Link to the source article – http://www.metalunderground.com/news/details.cfm?newsid=152990

In an identifiable conundrum for any heavy metal fan, Megadeth guitarist Kiko Loureiro couldn’t nail it down to just one — or even just one…

Megadeth’s Dave Mustaine wants to mentor young bands, with some help from The Big Four. He revealed that he sometimes thinks “how much better things would…

‘The Sick, the Dying and the Dead’ is on its way. Continue reading… Link to the source article – https://loudwire.com/megadeth-new-album-spring-2022-dave-mustaine/

Megadeth will release a new album titled The Sick, the Dying … and the Dead! on Sept. 2. The LP’s first single, “We’ll Be Back,” is…