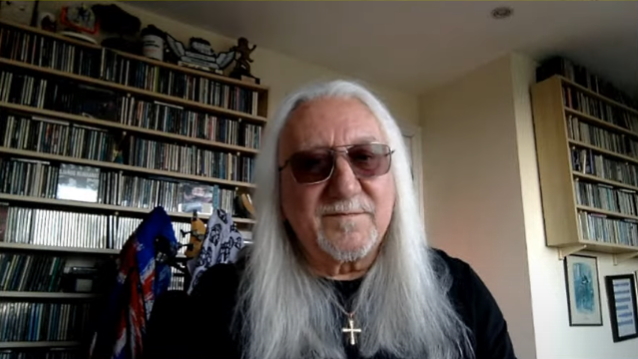 During an appearance on the “In The Trenches With Ryan Roxie” video podcast, URIAH HEEP guitarist Mick Box spoke about the progress of the recording sessions for the legendary progressive rockers’ 26th LP. “At the moment, we’ve recorded a new album,” he said (as transcribed by BLABBERMOUTH.NET). “It’s in the bag. We used Jay Ruston, the producer that produced the last album, ‘Living The Dream’, which, for us, was marvelous because it was revered by both the media, the press as well as the fans and also is one of the best of our career. So to get an album like that 50 years on and get those sort of accolades, we kept with the same team. So, yeah, it’s a great album. It’s rockin’. It’s got all the elements that HEEP‘s known for and all the musicality and the lyrics and everything else. So, yeah, it’s there.”

Regarding when fans can expect to see the new URIAH HEEP album released, Box said: “At the moment, we’re in the process of choosing titles, choosing the artwork and all those sort of things. Then that’ll get presented to the record company and, to be honest, it’ll be decided by them. We’re with a company called Silver Lining, and it’s our first album with them.

This past February, Box told Danny Stoakes that URIAH HEEP won’t play any new songs on tour before the upcoming album is released. “We’d not be allowed to by the record company, as much as we would be tempted,” he explained. “In today’s market, let’s put it this way, if we play a [new] song on stage, before I’ve got the jeans off and showered and poured a drink, it’s recorded and up on YouTube and Facebook and everything else… So it’s highly unlikely — for those reasons. I mean, for us, we’d play them all. But sometimes your hands are tied for a reason. And the record company, they come in and allow us to go in and record and do that, so you have to play ball with them.”

“Living The Dream” was released in September 2018 via Frontiers Music Srl. The LP was helmed by Ruston, who has previously worked with ANTHRAX, STONE SOUR and STEEL PANTHER, among others.

Box is the original guitarist and sole remaining founding member of URIAH HEEP. He, vocalist Bernie Shaw and keyboardist/vocalist Phil Lanzon have formed the nucleus of the band for more than 35 years and released 17 albums together.

URIAH HEEP debuted in 1970 with the release of one of hard rock’s milestones, “Very ‘Eavy, Very ‘Umble”, and has since sold in excess of 40 million albums worldwide. They constantly tour the world, playing up to 125 shows a year to more than 500,000 fans. The band’s live set features the classic tracks from the ’70s and is a musical journey from the band’s beginnings to the present day.

Link to the source article – https://www.blabbermouth.net/news/mick-box-on-upcoming-uriah-heep-album-its-got-all-the-elements-that-the-band-is-known-for/

In a new interview with Danny Stoakes, URIAH HEEP guitarist Mick Box spoke about the progress of the recording sessions for the legendary progressive rockers’…

In a new interview with Vikram Chandrasekar of Tales From The Road, URIAH HEEP guitarist Mick Box spoke about the progress of the recording sessions…

March 23, 2022 In a new interview with Shawn Ratches of Laughingmonkeymusic, URIAH HEEP guitarist Mick Box spoke about the progress of the recording sessions…

Legendary progressive rock band URIAH HEEP has announced an extensive European tour for 2022. The trek, consisting of 61 dates across 28 countries, is the…