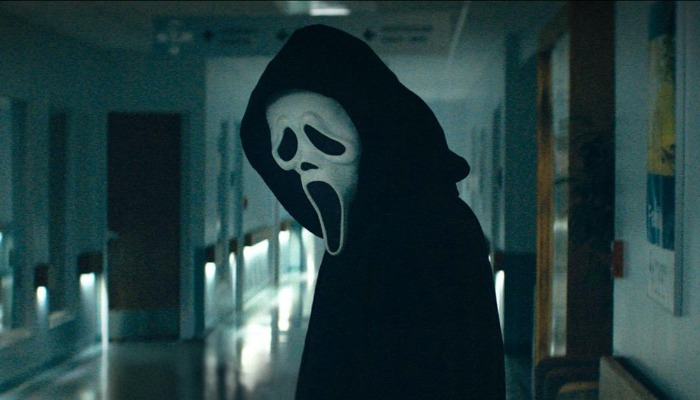 After nearly a year in production, Scream is officially making its comeback to the big screen. Paramount Pictures released the first trailer for the latest film in the series, and it’s packed with Easter eggs.

Set to hit theaters Jan. 14, 2022, Scream is a quasi-reboot of the franchise. This time, it centers on the relatives of the original characters and introduces a new cast.

Read more: The story behind POORSTACY’S horror-influenced ‘Party at The Cemetery’

Scream, also known by fans as Scream 5, is directed by Matt Bettinelli-Olpin and Tyler Gillett. The pair previously directed the 2019 comedic-horror film Ready Or Not. This Scream film will be the first movie in the franchise since the passing of creator and horror movie legend Wes Craven.

Last November, it was announced that filming had officially wrapped on Scream 5. The film faced some setbacks due to the COVID-19 pandemic but ultimately finished production with Kevin Williamson. The franchise’s writer/creator shared the news via Twitter.

“I’m excited for you to return to Woodsboro and get really scared again,” Williamson writes. “I believe Wes would’ve been so proud of the film that Matt and Tyler are making.”

“I’m thrilled to be reunited with Neve, Courteney, David and Marley. [A]nd to be working alongside a new filmmaking team and incredible cast of newcomers that have come together to continue Wes’s legacy with the upcoming relaunch of the franchise that I hold so dear to my heart.”

That’s a wrap on Scream, which I’m excited to announce is the official title of the next film! Nearly 25 years ago, when I wrote Scream and Wes Craven brought it to life, I could not have imagined the lasting impact it would have on you, the fans. (1/3) pic.twitter.com/RCuhVUclG4

Read more: Here’s why ‘Scream’ fans are confused by the official title for ‘Scream 5’

The trailer reveals a peek at what’s to come and offers a trip down memory lane for devoted fans. From the first look, there are plenty of cinematic parallels from the franchise, including a shot of the infamous Scream house.

To add to this, we see Neve Campbell reprising her role as Sidney Prescott, along with David Arquette as Dewey Riley and Courteney Cox as Gale Weathers.

Along with Scream’s returning characters, the new cast includes Jack Quaid (The Boys), Melissa Barrera (In The Heights), Jenna Ortega (You), Dylan Minnette (13 Reasons Why) and many other recognizable faces.

The official synopsis of the movie reads, “Twenty-five years after a streak of brutal murders shocked the quiet town of Woodsboro, a new killer has donned the Ghostface mask and begins targeting a group of teenagers to resurrect secrets from the town’s deadly past.”

Link to the source article – https://www.altpress.com/news/scream-5-official-trailer/

It’s the time of the year to celebrate one of horror’s greatest film franchises. Continue reading… Link to the source article – https://ultimateclassicrock.com/halloween-film-franchise/

This band. Ice Nine Kills have released another track from their upcoming album ‘The Silver Scream 2: Welcome To Horrorwood’, and this time they are…

It has been five years since DC’s Batman has appeared in a feature film. Now, the franchise is looking to continue its streak with its…

Slashercore outfit ICE NINE KILLS has continued the roll out of its highly anticipated new album “The Silver Scream 2: Welcome To Horrorwood” (out October…