Nita Strauss, the Los Angeles-based guitar shredder for the ALICE COOPER band, will perform the national anthem on “NXT TakeOver: Stand And Deliver”.

“NXT TakeOver: Stand And Deliver” is a pay-per-view wrestling television special produced by WWE for their NXT brand division.

Nita previously performed an epic entrance theme for Shinsuke Nakamura on WrestleMania 34 and played alongside HALESTORM‘s Lzzy Hale for the WWE Evolution intro, making her a household name in the WWE world.

Strauss has been playing with Alice Cooper since 2014 when she replaced Australian musician and former Michael Jackson player Orianthi. She joined Alice in time for a mammoth MÖTLEY CRÜE tour. She was recommended to Cooper by the legendary rocker’s former bass player and WINGER frontman Kip Winger.

Strauss is currently working on her new solo album, tentatively due later this year. It will be the follow-up to her first solo LP, “Controlled Chaos”, released in 2018 via Sumerian Records. 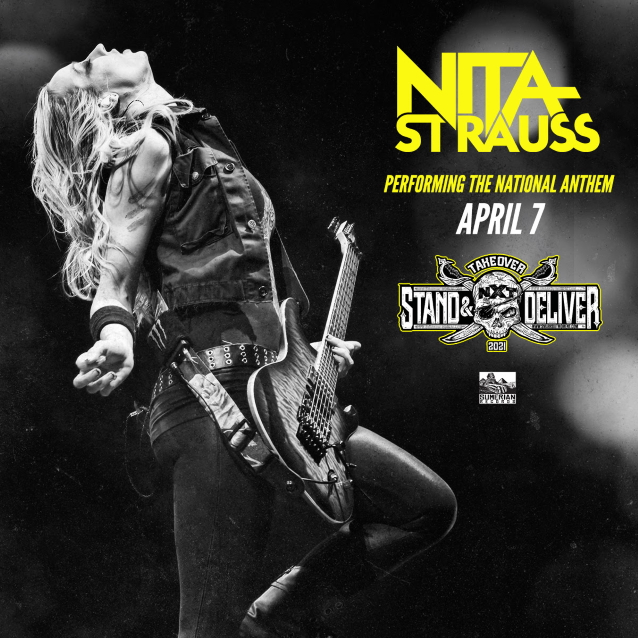 Link to the source article – https://www.blabbermouth.net/news/nita-strauss-to-perform-u-s-national-anthem-on-nxt-takeover-stand-and-deliver/

According to Wrestling Observer, Ozzy Osbourne will be inducted into the WWE Hall Of Fame. Osbourne was an unannounced addition of the combined 2020/2021 WWE…

In a new interview with “The SDR Show”, legendary rocker Alice Cooper was asked to describe the first drug experience he ever had. He replied…