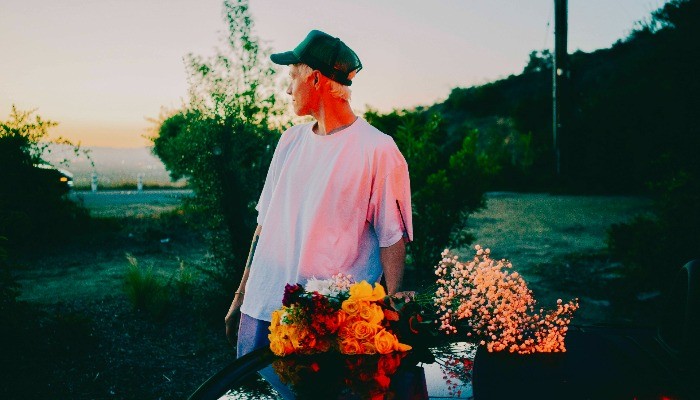 Fresh in the indie scene, Nolie is a charming singer-songwriter and creative mastermind with a DIY perspective on both life and his work. With roots in hardcore and screamo music, his reinvention into the indie-pop world is in part thanks to the smooth R&B songs he grew up listening to.

Nolie had just wrapped up a small tour before the pandemic hit last year and everything had to be put on pause. He didn’t get discouraged, though, instead turning the situation in his favor and diving into his writing. Once he has an idea, the rest comes easy, sometimes only taking mere days to conceptualize the direction of a song. This inspired attitude follows him into all creative aspects of his life, even going as far as toying with the idea of making pottery like Seth Rogen does.

With hypnotic beats and stylized vocals, Nolie’s music transcends one singular feeling or emotion. Every song oozes with melodic passion in its own way, from “Not My Life,” a bouncy track about not wanting to embrace a stereotypical 9-to-5 life, to “Renaissance,” a different kind of breakup song where the relationship ends with a mutual understanding and no bad blood.

2021 is Nolie’s year. Once it’s safe to travel and tour, he’s ready to hit the road and connect directly with fans. Whether that’s in a couple of months or another long year, the anticipation of getting back out there—even if just at local L.A. shows—is worth the wait.

Others have called your music lo-fi, indie or pop, but how would you describe your sound right now?

It’s funny hearing people define it ’cause I get the whole spectrum of “electronic” or this or that. It’s not really electronic—there are elements to it. In my mind, I make pop music, and I lean way more toward the indie space of music. So it’s like indie pop, but my roots as a singer come from R&B just from what I was raised on. I think indie pop is the clearest way for me to put it, but I’m just making stuff that makes me feel really good and trying to not make super-sad songs all the time because I have a lot. If I didn’t have my producer Christofi sometimes, I would just have dreary tracks all day. I need him to make it shine and pop.

What’s your creative process of making a song like, from the initial conception to recording and then to your finished product?

It’s really quick. I work mainly with one producer/co-writer, my friend Christofi. He has been there since the beginning of what I’ve done. He’s been the most consistent person. A lot of times, he knows where we’re wanting to go or where I’m wanting to go production-wise. So he will come with a batch of music, just making tons of music and tracks. He does production for a lot of people, but he sent me a couple of songs that he was like, “I thought of you.”

For a lot of the recent ones, it’s just been a matter of two days where we’ll really get hold of a concept. So, my process is really simple and really quick. I definitely got to feel it in the track and the chords and everything. I got to feel like I can make the melody happen because I’m just that [kind of] writer. As part of how I write, I just go right for the melody. I’ll come with concepts every once in a while, but a lot of times I get a feeling, and then I interject how I’m feeling right in the moment.

Once the pandemic settles down and things go back to normal, what are you excited about doing with your music?

Touring is obviously the big goal. Right before quarantine happened, I did a tour. So in my mind, it’s going to be doing a bunch of festivals. We are planning some small shows in L.A., maybe some other little one-off things. On the fan side, I’m really trying to get back out there, but I can understand that until 2022 rolls around, I’m putting out music and doing my own little localized things. Then on my side of it, I’ve not been able to get out and interact with my friends I’ve made on social media, like artists and writers. I’m just now getting back out to do that.

Is there another aspect of music that you think you could see yourself experimenting with in the future?

Before I was doing music, I did photography, and I was a touring photographer, videographer, director—that whole all-encompassing thing. I haven’t been in a position yet to get the kind of cameras I’d obviously love to get and really go for it on my video side. That will be a really exciting thing as far as seeing how, in the future, I can combine my video and my photo stuff into the project and really be able to do it. Right now, it’s me and my friends getting the tripod and pulling off the covers and pulling off the videos and seeing how that can go.

As far as genres go, I just hope it continues to elevate. I want to have a little bit more of a conceptualized moment. Right now, I’m just expressing myself, putting out singles, doing my thing. I’m not really moving like, “Oh, I’m going to do this big project, and I’m doing this big character right now.” Visually, [I want to see] how I can tangibly create objects in the world, like if I’m a musician that makes freaking pottery just like Seth Rogen. Who knows? Anything and everything. Seeing how we can make it just be all over the place. If I want to make another screamo record and indulge in the 15-year-old me, then maybe I will. I don’t ever want to feel like I can’t try and dream a little bit.

What’s the most important thing you want to say with your music?

For me, it’s a conversation to [my] future and past self. I want it to just feel very inclusive of everyone. If you’re somebody that’s in a place of distress or you’re feeling [some type of way] one day, I want it to be a safe space where you can go and just get it out. ’Cause I’m working it out in those songs a lot. I can’t ever really say what anybody else’s experience is going to be, but I just hope that when they’re listening to my music or they’re around something I created, they feel at peace. I hope that it makes them unlock that dreamer inner child ’cause that’s what it did for me. Since I started, it reconnected me to the little 14-, 15-year-old me, and he’s stoked. I can just be like a kid again. I hope that’s what it translates to: keeping you dreaming and willing to try.

SONG RECOMMENDATION: “Not My Life”

The post Nolie takes an experimental approach to his music and artistry appeared first on Alternative Press.

Link to the source article – https://www.altpress.com/features/nolie-interview-issue-396/

Iogi had a musical calling from a very young age that has evolved to become an ambitious and successful coming of age story. Born and…

Always challenging himself to innovate and move beyond his musical stratosphere, Monolink is an articulate, active and ever-evolving artist bending the musical limits one project…

Tatiana Hazel reflects on the pandemic’s impact on her mental health in her newest track “It’s All Right.” Electric guitar riffs meld with Hazel’s silky…