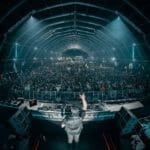 2022 is shaping up to be the year of Nurko. After a standout 2021 that included collaborations with some of dance music’s biggest names like ILLENUM, Dabin, and William Black, Nurko is setting out for an even bigger follow-up. We knew an EP was coming and got the formal announcement of Arrival via a series of Instagram posts outlining “The Symbol,” “The Story,” and “The Meaning” behind Nurko. Top top it all off, his first solo headlining tour was announced with dates in New York at Webster Hall, Church in Denver, and Wish in Atlanta, as well as a stop at Los Angeles’ Hollywood Palladium in support of Virtual Riot, not to mention sets at Beyond Wonderland and Ubbi Dubbi to boot.

Nurko is hot off the release of some highly sought-after IDs, including his rendition of “Hallelujah” with Devon Baldwin and “Disappearing Now” with Chandler Leighton. It’s tough to adequately articulate just how quickly Nurko has burst onto the scene, but the melodic-bass guru continues to reaffirm his sonic supremacy with each move he makes. View the full tour announcement below and buy tickets here.

The post Nurko announces first headlining tour for 2022 in lead up to debut EP, ‘Arrival’ appeared first on Dancing Astronaut.

Link to the source article – https://dancingastronaut.com/2022/01/nurko-announces-first-headlining-tour-for-2022-in-lead-up-to-debut-ep-arrival/

Our Artist to Watch in 2021 certainly lived up to that billing and has only continued his ascent in dance music circles in 2022. Earlier…

The anticipation for Nurko’s debut EP Arrival only continues to build with each single in the project’s rollout. Released via Proximity, his third single “Spinnin’…

by: Zach Salafia Mar 24, 2022 Nurko’s debut EP, Arrival gets its outro in the form of its final single “Breathing Again” with Skye Silansky.…

Returning after the recent release of the cover art for his highly-anticipated Arrival EP, established force NURKO continues to unveil what he has in store with emotive…

Classics never go out of style and Leonard Cohen’s 1984 song “Hallelujah” is certainly as classic as it gets. But almost four decades later, nobody…