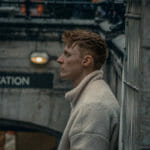 Rewind the clock exactly three years to This Never Happened’s fourth Root To Branch installment. Lane 8 saw something in OCULA that warranted admission to his label and a handful of EPs, singles, and collaborations later, OCULA is the newest name—following Le Youth—to have his debut album locked in for a 2022 release on This Never Happened. Ahead of the April 22 delivery of Crossroad, OCULA is sharing his LP’s first preview in the form of “Green Willow” alongside Phillip LaRue.

And looking back to 2018, OCULA unsurprisingly says that his decision to try his luck by sending music to Lane 8 has surely paid off tenfold. Through “Green Willow,” Crossroads has a towering bar fixed for what’s in store across its remaining 11 additions, with LaRue’s comforting, springtime-ready vocals finely lining up alongside an inspiriting profile of blue-chip melodic house that OCULA has continued to deliver time and time again. OCULA shared a heartfelt message along with the Crossroad revelation, stating,

“There’s been so many times up to this point where I’ve doubted myself and had numerous hurdles thrown my way, and I wanted this album to pay homage to those moments where it would’ve been much easier to give up – but now here we are. ‘Crossroad’ is about those times you have to make difficult choices, take leaps of faith, and commit everything you have to make something work.”

Link to the source article – https://dancingastronaut.com/2022/03/ocula-introduces-debut-lp-crossroad-with-phillip-larue-pairing-on-this-never-happened/

by: Ross Goldenberg Mar 31, 2022 Everyone’s favorite six words from Lane 8 are here once again. In the midst of Lane 8’s ongoing Reviver…

by: Ross Goldenberg Nov 28, 2022 More than two years ago, Le Youth played a hand in reworking an album that ignited Lane 8‘s Dancing…

by: Ross Goldenberg Jun 1, 2022 Dating back to the end of 2019, Le Youth has consistently remained a familiar face on This Never Happened.…

by: Ross Goldenberg Apr 13, 2022 Sultan + Shepard and Jerro together on This Never Happened seemed like a pairing that was only a matter…