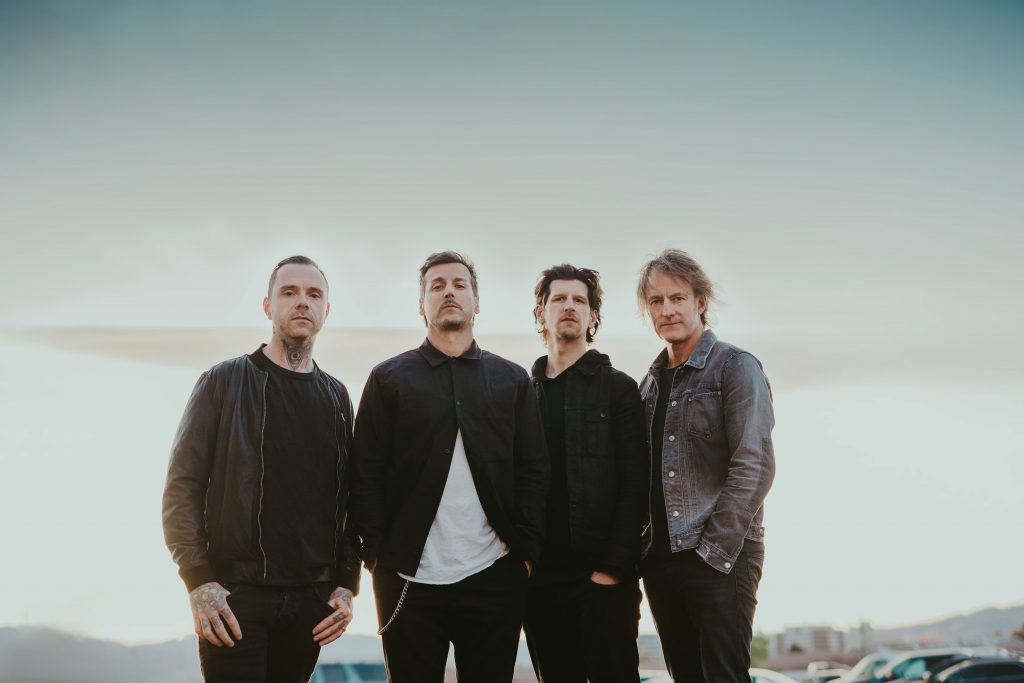 For our monthly 10 Topics interview, Our Lady Peace vocalist Raine Maida details the band’s forthcoming record, Spiritual Machines 2, wisdom gleaned from David Bowie and the song that always makes him emotional. He also revealed that their new album will be released as an NFT (non-fungible token) before hitting streaming services because, as Maida puts it, “it’s the future for artists and creators.”

It is the fact that we were able to reinvent ourselves on this record, and I give a lot of it to Dave Sitek [TV On The Radio]. There’s something about Dave and the collaboration with Our Lady Peace that just worked, where he was able to keep the essence of what we are but take it to a new dimension. Because we would have never got there as a band ourselves, so it was just amazing. He calls it future rock. We basically made an anti-rock record that has lots of guitars on it, which is crazy to say.

[Ray Kurzweil] made all these wonderful predictions on the first album. You have to go back and look at them and say, “Hey, what did he get right? What did he get wrong? And what are the next set of predictions?” So I thought there’s enough context there to actually warrant doing a sequel. There’s synergy between the way we did the record with Dave, making it a little bit more dancey. When you think about the future, I think of this scorched-earth, dystopian [landscape]. Ray’s predictions are really bright. He’s like, “Technology is going to help us with poverty. It’s going to help us with food sources. It’s going to help us with our carbon footprint.” I think this record is really bright and positive, which I love.

A SONG THAT ALWAYS MAKES YOU EMOTIONAL

More so than anything right now, there’s a song by Soundgarden called “Zero Chance.” The fact that Cornell’s gone, the fact that a lot of those guys are gone from that era that inspired me and I grew up with, and it’s just a beaut from a band that was so heavy.

When we did our launch party [for the RecMob app], we needed someone that has a [history with] social justice. Nadya [Tolokonnikova]’s a badass. Obviously, she went to prison for protesting against her government and Putin. And so she came, she DJed, we became friends. Then we were talking about the kitschiness and the tongue-in-cheekiness of “Stop Making Stupid People Famous.” Who can we get that actually has some fame but for something that is just and right? It was like, “Oh, Nadya.” Just so happens, Dave had worked with her. Two days later, she’d done her part.

BEING ONSTAGE FOR THE FIRST TIME IN 18 MONTHS

It was pretty surreal. It was a little socially distanced, so it wasn’t exactly the way you wanted it, but it was enough to where I was like, “Man, there’s nothing like connecting live.” You just forget how powerful it is. I think for an artist, at least for a rock band, it’s primal. That’s why you do it. I remember when we’d just play sold-out clubs when I was starting out—the feeling of being hot and sweaty with 300 people. Hopefully, this keeps happening, and we get back and keep playing shows. It’s the best drug in the world.

THE LEGACY YOU WANT TO LEAVE BEHIND

I’ve always looked at it as a body of work, but this new record is so important in our career because I think it’s gonna redefine what people’s preconceptions of us are. I’m a huge Bowie fan, Talking Heads, the Clash. It’s those bands that reinvented themselves all the time and weren’t afraid to challenge their fans, challenge themselves as artists, get outside of their comfort zone. I think Bowie said it best: Great art doesn’t happen in safe places. I feel like this record was made in a very unsafe place with Dave Sitek in the most magnificent, wonderful way.

WHAT IT TAKES TO GO SOLO

The need as a creator to just keep creating. I think you get stuck in the band. It seems like there’s a pattern; there’s a cadence. You put out a record, which is like 10 or 12 songs, and you tour, so you’re not really putting out music. I think of a painter. You’re just painting all the time. You don’t stop. Maybe you stop for a few weeks, but you don’t go on the road for a year and not paint. So for me as a writer, that’s all I do. I wake up in the morning, and I grab a guitar, and I write a song, or I sit at the piano and write a song.

YOUR EARLIEST MEMORY OF MUSIC

It was Elvis because I used to watch old Elvis movies with my dad on Sunday afternoons on the couch. It was a weird introduction to music in a way. He was this enigma, and I just appreciate that he was bigger than life. He had these great songs, and he was amazing, but he was a bigger-than-life figure. There’s Bowie, Cobain. There’s not many [people] that are like that. Jim Morrison had that aura around him. I think John Lennon had it. I think people like Patti Smith have it.

WHAT YOU’RE LISTENING TO, NEW OR OLD

During the pandemic, I felt like I had to go back to safe records, places that brought me good memories. So I was going back to Buckley and Nick Cave, Leonard Cohen—stuff that really speaks more to the solo stuff I do, but that’s my safe place. Then I would listen to Superunknown by Soundgarden, Quicksand, these disparate music genres, but albums that were part of my growing up. I felt like, “Man, this is what I needed at the time.” So I’m just starting to listen to some new things right now.

WHY PEOPLE SHOULD INVEST IN NFTS

Because it’s the future for artists and creators. There’s a big paradigm shift in music when DSPs came in. In terms of trickle-down to the artists, it doesn’t really happen. So what NFTs are going to do is change how we distribute music, how we get them direct to our fans, and what we can actually give to our fans now is next level. The way we’re releasing Spiritual Machines 2 is by NFTs first to our fans. So there’s going to be 10,000 limited-edition NFTs. You’ll get the full record. You’ll get high-quality audio. You’re gonna get a demo from each song. You’re gonna get a one-of-one artwork. You’re gonna get commentary on the song and then maybe a couple of other things. I’m excited because now we have the ability to deliver that stuff, and as a fan, you get to participate.

The post Our Lady Peace’s ‘Spiritual Machines 2’ is being released as an NFT appeared first on Alternative Press.

Link to the source article – https://www.altpress.com/features/our-lady-peace-raine-maida-interview-spiritual-machines-2/

Former MEGADETH guitarist Chris Poland has confirmed to Sofa King Cool that the song “Liar” from the band’s 1988 album “So Far, So Good… So…

In a new interview with Pierre Gutiérrez of Rock Talks, former MEGADETH guitarist Chris Poland reflected on the lawsuit he reportedly filed against Dave Mustaine…

MEGADETH mainman Dave Mustaine has taken to social media to wish a happy birthday to the band’s late drummer, Nick Menza. Menza, who was born…

Pussy Riot are releasing an exclusive NFT titled Drink My Blood. The project was developed with social token community Friends With Benefits (FWB). The art…