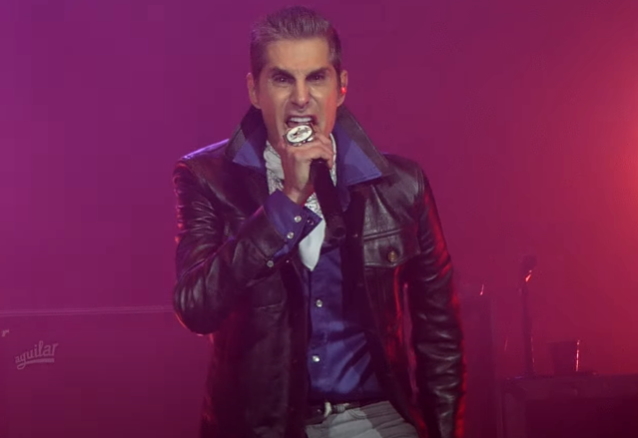 In a new interview with Consequence, JANE’S ADDICTION singer Perry Farrell was asked if there are plans for the band to release any new music. He responded: “You never know; you just never know. But what I would love to see — I would love to see us record a couple of tracks this year. Even if it’s two or three tracks. Two tracks — I don’t know; I feel two is nice. I think people can take two — like two aspirin.”

As for a possible full-fledged tour from JANE’S ADDICTION, Perry said: “Well, we do have ambitions to hit the road this year. So it won’t be long before you know if those ambitions have come to fruition.”

A year and a half ago, Farrell told Classic Rock magazine that JANE’S ADDICTION was more likely to release individual songs than a new full-length album.

“We’ve got so much JANE’S material in the can,” he explained. “We’ll be releasing a couple of tracks, maybe writing some new ones.”

In August 2020, JANE’S ADDICTION played two songs during Lollapalooza‘s Lolla2020 livestream, a free four-night broadcast event which took place on the original dates of the Chicago-based festival. Farrell, guitarist Dave Navarro, drummer Stephen Perkins and bassist Chris Chaney reunited for their first public appearance in three years to perform “I Would For You” and “Stop!”

JANE’S ADDICTION released its last album, “The Great Escape Artist”, back in 2011.

“The Great Escape Artist” sold around 24,000 copies in the United States in its first week of release to land at position No. 12 on The Billboard 200 chart. It was JANE’S ADDICTION‘s first all-new studio effort since 2003’s “Strays”, which opened with more than 110,000 units to enter the chart at No. 4.

“The Great Escape Artist” was only JANE’S ADDICTION‘s fourth album of original material in 20 years.

Although founding bassist Eric Avery initially returned to the band when it reactivated in 2009, he quit the following year.

Dave Sitek of TV ON THE RADIO played bass on and co-produced “The Great Escape Artist”, while Chaney has returned as touring bassist.

Link to the source article – https://www.blabbermouth.net/news/perry-farrell-would-love-to-see-janes-addiction-record-two-new-songs-this-year/

Both of Perry Farrell’s best-known bands have started making a lot of noise all of a sudden. To be fair, Jane’s Addiction was already set…

Finally, there’s some signs of life from Jane’s Addiction — and it could include new music, too. The future plans of the pivotal ’90s rock act have…