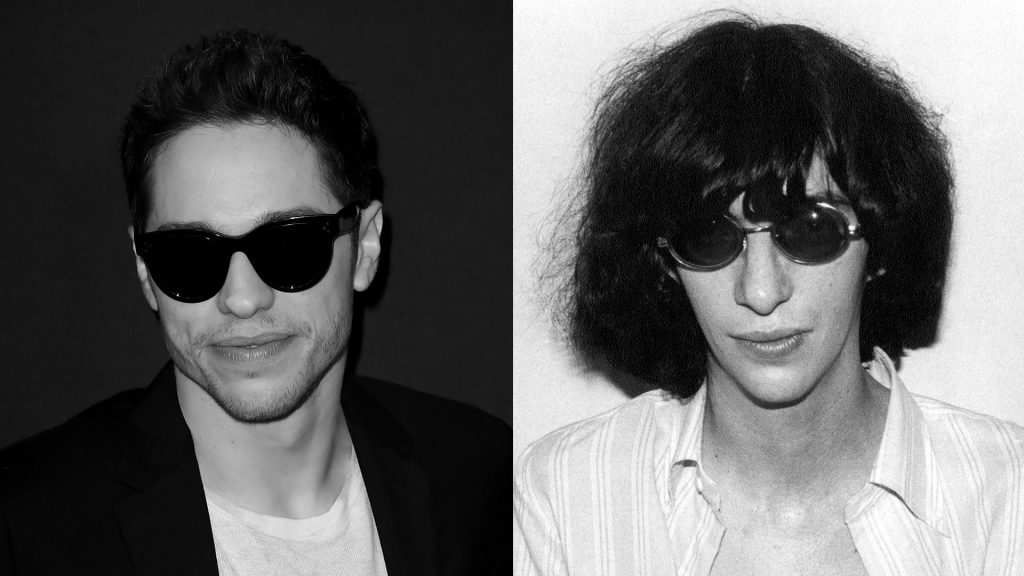 Pete Davidson has just landed one of his next movie roles. The comedian is set to portray punk icon Joey Ramone in the Netflix biopic I Slept With Joey Ramone. The news was announced April 15, which marks the 20th anniversary of the Ramones vocalist’s death.

In addition to starring in I Slept With Joey Ramone, Davidson is also teaming back up with director Jason Orley to write the biopic’s treatment. The film is based on the Mickey Leigh memoir of the same name.

Read more: Sex Pistols return to the ’70s in this first look at the new mini-series ‘Pistol’

According to The Hollywood Reporter, the film is being made in cooperation with the Estate of Joey Ramone. The movie will depict the musician’s life and career as the lead vocalist of the Ramones. At this time, no specific plot details regarding the Netflix biopic have been released. However, the memoir’s synopsis does offer some insight into what viewers may see in the upcoming film.

“When the Ramones recorded their debut album in 1976, it heralded the true birth of punk rock,” the synopsis says via Barnes And Noble. “Joey Ramone gave voice to the disaffected youth of the seventies and eighties [and] the band influenced the counterculture for decades to come. Joey’s brother, Mickey Leigh, shares a fascinating, intimate look at the turbulent life of one of America’s greatest—and unlikeliest—music icons. While the music lives on for new generations to discover, I Slept with Joey Ramone is the enduring portrait of a man who struggled to find his voice. And of the brother who loved him.”

So far, Davidson is the only actor publicly attached to I Slept With Joey Ramone. For the project, he’s reuniting with Orley who directed both Big Time Adolescence and Pete Davidson: Alive From New York. Alongside Davidson, Rory Rosegarten (Everybody Loves Raymond), Leigh and David Spiegelman are the film’s executive producers. Orley is also directing I Slept With Joey Ramone which is being made in partnership with both Netflix and STXfilms.

STXfilms Chairman Adam Fogelson discussed why the company decided to team up with Netflix to tell Ramone’s story on screen.

“When you share a bed with someone,” Fogelson says in a press release. “And not just a bed, but a childhood, a family, and a lifetime–you know that person better than anybody else. Mickey Leigh not only collaborated with his big brother’s band, he has irreplaceable memories of and insights into Joey Ramone. [He] supported him when no one else would and witnessed him overcome adversity in the most dramatic way.

“I Slept with Joey Ramone is a great rock anthem that will make an equally great rock biopic, set apart by a universal story of family. Pete is perfect for this role. We’re excited he and Jason will be bringing this icon of rock to life. [We are] thrilled to be collaborating once again with our friends at Netflix.”

Over the past few years, Davidson has made his transition from a TV comedian to a silver screen actor. Back in 2019, he starred as Zeke in Big Time Adolescence alongside his real-life BFF Machine Gun Kelly. In the film, he’s a college dropout whose best friend is a high school student (Griffin Gluck) transitioning into adulthood.

Read more: 10 of the wildest ways musicians ended up with tattoos

Then, in 2020, Davidson worked with director Judd Apatow on his semi-autobiographical film The King Of Staten Island. In the movie, Davidson plays Scott Carlin, a young New Yorker dealing with the death of his firefighter father.

Later this year, Davidson is starring as Blackguard in The Suicide Squad. He joins a star-studded cast in the James Gunn-directed film including Margot Robbie who is reprising her role as Harley Quinn. As well, DC fans will see Idris Elba as Bloodsport, Viola Davis as Amanda Waller and John Cena as Peacemaker among others. The film officially arrives August 6 and will be simultaneously released in theaters and on HBO Max.

Read more: 10 modern punk bands who are channeling acts from the first wave

Although it’s April Fool’s, the only joke here is on the supervillains who agreed to work for Amanda Waller. Brand new #TheSuicideSquad trailer which dropped last night exclusively in theaters! Meet us in theaters August 6! pic.twitter.com/FwbtANOXEX

The comedian even pleased The Nightmare Before Christmas fans when he channeled Jack Skellington for a recent sketch. Between his growing movie career and SNL residency, Davidson continues to produce plenty of content over the past few years.

What are your reactions to Pete Davidson playing Joey Ramone in the new Netflix biopic? Let us know in the comments below.

The post Pete Davidson is starring as Joey Ramone in an upcoming Netflix biopic appeared first on Alternative Press.

Link to the source article – https://www.altpress.com/news/pete-davidson-joey-ramone-netflix-biopic/

Netflix and STXfilms have partnered to develop and produce “I Slept With Joey Ramone”, a biopic chronicling the life of the king of punk. Pete…

The king of Staten Island is turning into the king of punk. Pete Davidson is set to star as Joey Ramone in a new biopic…

THE OFFSPRING guitarist Kevin “Noodles” Wasserman was the featured guest on BBC‘s “The Rock Show With Johnnie Walker” during the “Rock God” segment. Noodles picked…

According to Deadline, Netflix is close to securing a deal for the upcoming KISS biopic “Shout It Out Loud”. The film will be directed by…