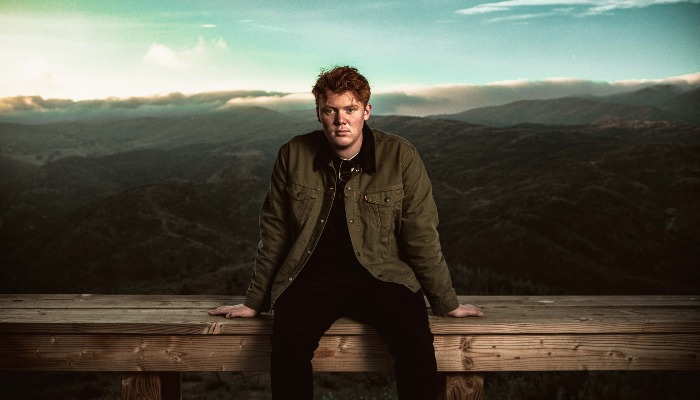 Beckett has released the single “Weirdo.” The new track is the debut single from the 17-year-old musician and offers the first taste of his upcoming EP, Weirdo.

Meeting almost by chance, Beckett connected with Simple Plan’s Pierre Bouvier, a nearby neighbor in Ojai, California. Struck by the young musician’s singing talent and musical savvy, Bouvier took an interest in Beckett’s music. Gradually, the pair developed a musical bond that led them to co-write music and, eventually, record an EP together.

The song delivers a powerful message about embracing your inner weirdo, refusing to let social pressures keep us from maintaining a positive self-image.

“What ‘Weirdo’ means to me is that it’s OK to be different and weird,” Beckett says. “It’s giving the middle finger to bullies or people who make fun of you for being yourself because everyone at some point in their lives has felt like a weirdo in some way. I think in 2021, we have to learn to stop the hate and just love each other because that will make the world a happier place.”

Ahead of “Weirdo,” Bouvier connected with Alternative Press. During our conversation, he shared the unique story that led to collaborating with Beckett. (Not many teenagers would have the guts to casually ask the frontman of Simple Plan if they could play a show at his house). Bouvier also spoke about the musician’s skill as well as what it was like to work together to record music.

More than that, Bouvier captured Beckett’s potential and ambition. “Weirdo” is a first glance at the young talent’s work. The track showcases Beckett’s raw skill as an artist, as well as the duo’s ability to write strong hooks.

Below, check out our interview with Bouvier and listen to Beckett’s “Weirdo.”

The way you two connected is so unique. Can you tell the whole story about how you and Beckett came to collaborate?

We happened to be neighbors. We live, I’d say, about a quarter-mile away from each other in this small town called Ojai, which is where my wife is from. I met his little brother, who’s 14 at this point, and he plays at the golf course. I was out there hitting some balls, and we play once in a while. He’s like, “Hey, my brother is a singer. You should listen to his CD.” So he gave me this album demo that Beckett had recorded on his own.

I get a lot of music from various people being like, “Listen to my demo.” I just put it on the side because people don’t have CD players in their house anymore. I think his little brother said, “Hey, did you hear the song?” Went back home, put it in my car and I was like, “Whoa, this is actually pretty good.” In fact, I enjoyed it so much that I pulled out a DVD player and put it in my living room so I could play CDs from it. My wife and I would play it in the background while cooking dinner and stuff. I was impressed by what he had come up with.

Read more: Josh Katz and Joel Madden on why Badflower know exactly who they are

At one point, he asked me, “Hey, could I come play a show at your house?” I was like, “Actually, I have a bunch of friends here right now.”  I had a little party going on, a pool party, and there’s people outside. So he came over, brought a couple of amps, brought his drummer. Everyone was like, “Oh, my God!” He knows a bunch of covers. He’s an encyclopedia of music.

Then he told me, “We’re going to record a song at my house tomorrow, but I’m not sure where we’re going to record it.” So, I said, “Use my garage if you want. You can put your drums in here and record here. I have a studio here. We can record your song.” He had a song that he had written, and he’s like, “Do you play bass?” I’m like, “Yeah, I can play bass.” So I played bass on a song that he recorded.

And so that’s how you came to write and record a bunch of music together?

As we were doing this, I was like, “Hey, we should write some songs together.” At that time, he was 16 years old. I had a bunch of songs that I had written for Simple Plan that over the years that had not made the cut. I had this song that was called “Weirdo.” We would have to rewrite it because it was a Simple Plan version. So after he recorded that song, about a week later, he came back here. We rewrote it and recorded it.

I think that he felt like I could be a good person to work with because what he’d done before is basically self-produced. He had a producer, but he was the guy calling all the shots. He’s only been playing guitar for two-and-a-half years. So the way he sounded was limited to what his abilities were. I think that he and I felt like, “Hey, if we get together, I’ve been recording music for 20 years. We can make this stuff sound a lot more modern.”

What initially jumped out to you about Beckett as a musician?

Two things struck me about him. His tone of voice is very unique. With my experience, there’re some things you just can’t teach. A person sounds the way they do. He’s got something about the way he delivers lines, this maturity to it. The fact that he knows so much about music — like, he would teach me about things about the Beatles. “Have you seen this interview with John Lennon?” He’s been singing since he’s like, 2, 3, 4 years old.

What was it like working in the studio together?

Every song was a little bit different. Sometimes you come up with a concept. There’s a song where he literally had this line. I’m like, “That’s it. That’s the song.” There’s another song. I wrote all the melodies on a piano. We write some lyrics together, and he was like, “You know what? I’m going to take a walk.” He came back half an hour later, and he had all the lyrics written down. Sometimes it would be a collaboration. Sometimes it’d be a little more me, sometimes a little bit more him.

The process was just us messing around here. He’s got a funny sense of humor. Sometimes I catch myself. I have to remember that he’s 17 years old because we were joking about South Park and Family Guy. We really bonded. Some days he’d come over, and we want to dig on something and nothing would come of it. And some days it would just flow out of us, and we’d work till the wee hours of the morning.

I think we both met each other at a really good time for each other, for me. I’ve been shadow-producing all the Simple Plan stuff. But I’ve never really done it for other people. It was just something that felt right at the right time. For him, he needed someone to help him shape what he wanted to sound like and get these ideas out.

From the songs you showed me, I was really struck by two things. First, I notice a really strong pop sensibility, both his delivery and the songwriting. The other thing that jumps out is how eclectic the project is. You both clearly pull from a lot of different directions.

What’s cool is that there’s a lot of different sounding things. He’s a big fan of music. He likes stuff from old-school hip-hop to straight-up pop stuff to really heavy rock things. We just vibed off of each other. His voice makes everything sound the way that he sounds. I’m looking back now, you’ve pinpointed the pop sensibility. That definitely comes from me. When I first heard his demo, you didn’t walk away hearing a hook.

That’s why when he came to me, I was like, “Well listen, I’m in Simple Plan. I write stuff that’s hooky, and that’s just what I do.” I’ve tried to fight it. I can’t fight it. I like big hooks. I taught him a bit about songwriting and how you want to make your chorus shine and how you want to use chord progressions. It’s definitely the influence of this guy from Simple Plan.

“Weirdo” definitely showcases that hooky aspect. It’s a great song musically, as well as in terms of its message.

A song like “Weirdo” can be an important song for a lot of people. It’s got this message of accepting yourself and accepting other people the way they are and not living up to these crazy standards that social media are putting in front of us every day. That’s important. I’ve got two daughters. I listen to that song, and I feel like that’s a good way to look at life. It’s good to be aware, and it’s good to be different. It’s good if people make fun of you because you’re different. That might be a great thing. You might look back and [be] like, “I’m glad I followed my heart. I’m glad I did something that wasn’t what everybody else was doing.”

The post Pierre Bouvier on collaborating with Beckett to write “Weirdo”—listen appeared first on Alternative Press.

Link to the source article – https://www.altpress.com/features/beckett-weirdo-pierre-bouvier-interview/

Simple Plan have released a touching new video for their recent single “The Antidote.” The song speaks of someone finding solace in another, and features…

Simple Plan have shared a new single “The Antidote” with fans today, serving as their first music in two years. The emotional single marks a…

With Alternative Press issue 400, we celebrate a major milestone for the magazine. AP has continued to change with the times, staying in touch with…

Domino Kirke has released a new music video for her latest single, “Mercy.” The track serves as the first taste of new music since her…