PORCUPINE TREE — Steven Wilson, Richard Barbieri and Gavin Harrison — has just shared “Of The New Day”, the latest track from “Closure/Continuation”, due on Friday, June 24 via Music For Nations/Megaforce Records.

“‘Of the New Day’ is a song of rebirth, emerging from darkness,” says Wilson. “It sounds deceptively simple, a recognizably atypical PORCUPINE TREE ballad. That is until you realize that the length of the bars is constantly changing, flipping between bars of regular 4/4 time to 3/4, to 5/4 to 6/4, 11/4, so that the track never settles into any steady time. It’s what PORCUPINE TREE can sometimes do really well, come up with a basic idea that’s almost intellectual or mathematical, but carry it off in a way that sounds completely natural and accessible. At least I hope there’s no sense of us being clever for the sake of it or putting technique over musicality. That is unless you want to specifically home in on that side of the composition.”

“Closure / Continuation” — which follows 2009’s “The Incident” — will be available on standard CD, standard black vinyl 2×12″ LP, white vinyl 2×12″ LP, transparent blue vinyl 2×12″ LP, and white cassette. In addition, a limited audiophile deluxe LP will also be available, cut at 45rpm on 3×12″ clear vinyl in 12″ slipcase box with two bonus tracks; a limited audiophile deluxe CD in 12″ slipcase box will include the standard CD, a second disc with three bonus tracks and instrumentals, Blu-ray disc with 5.1/Dolby Atmos and HD audio versions of the album, and an exclusive album art book. pre-orders are available now.

“‘Harridan’ and a few of the other new songs have been in play since shortly after the release of ‘The Incident’,” said PORCUPINE TREE. “They initially lived on a hard drive in a slowly growing computer file marked PT2012, later renamed PT2015, PT2018, and so on. There were times when we even forgot they were there, and times when they nagged us to finish them to see where they would take us. Listening to the finished pieces, it was clear that this wasn’t like any of our work outside of the band — the combined DNA of the people behind the music meant these tracks were forming what was undeniably, unmistakably, obviously a PORCUPINE TREE record. You’ll hear all of that DNA flowing right through ‘Harridan’.”

One of the most forward-thinking, genre-defying rock bands of any era, PORCUPINE TREE was founded in 1987 by renowned musician/producer Steven Wilson as an outlet for the experimental recordings he was making outside of his acclaimed post-rock duo NO-MAN. With the addition of keyboard player Richard Barbieri and drummer Gavin Harrison, PORCUPINE TREE soon evolved into a proper band, releasing 10 studio albums between 1992 and 2009. Each new release saw PORCUPINE TREE exploring new musical ideas, their expansive music shifting from pastoral psychedelic rock and ambient electronic soundscapes to experimental pop and propulsive metal. Later releases like 2007’s Grammy Award-nominated “Fear Of A Blank Planet” and 2009’s “The Incident” — the band’s biggest seller thus far, reaching the top 25 in both the U.S. and the U.K. — saw PORCUPINE TREE effortlessly melding distinctive genres to create a groundbreaking musical universe all their own.

As relentlessly creative on stage as they are in the studio, PORCUPINE TREE proved innovative live performers known for sonic innovation and inventive visual productions. In October 2010, the band entered a period of hiatus following a spectacular concert at London’s Royal Albert Hall — their biggest live show to date.

The most collaborative album of their highly lauded career, “Closure / Continuation” doesn’t simply pick up where PORCUPINE TREE left off back in 2010. While the familiar traits of the band’s idiosyncratic sound remain intact, the new album very much places PORCUPINE TREE in the here and now, with greater texture and color than ever before. 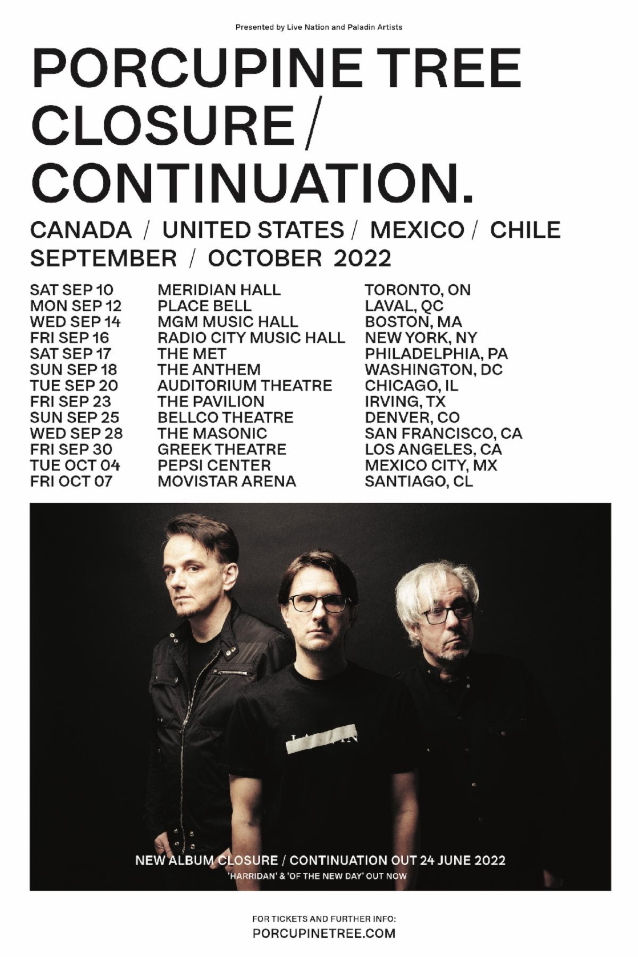 Link to the source article – https://www.blabbermouth.net/news/porcupine-tree-announces-summer-fall-2022-north-american-tour-dates/

It’s all happening. Porcupine Tree have revealed that they have reunited following them becoming inactive back in 2010.  And they have also announced that they…

Father John Misty has announced a 2022 headlining tour in support of Chloë and the Next 20th Century, due out on Friday via Sub Pop…

In support of her record that was released last year, Tori Amos will embark throughout North America on tour. Amos is slated to kick off…