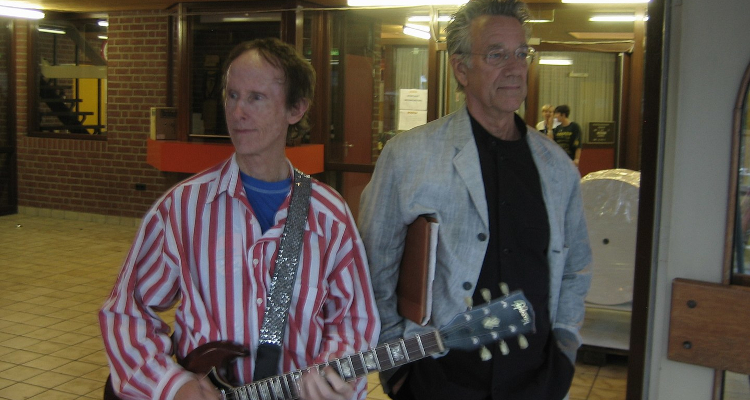 The Doors guitarist Robby Krieger and the estate of keyboardist Ray Manzarek have inked agreements to sell “all aspects” of their interests in the famed group – including publishing and recorded rights, trademarks, and more – to Primary Wave.

New York City-headquartered Primary Wave, 77-year-old Robby Krieger, and the estate of Ray Manzarek (who passed away in 2013) unveiled their “monumental” deal via a formal release today. These parties “have finalized an agreement” involving the aforementioned intellectual property as well as merch rights and more, Primary Wave said.

Besides appearing on each of The Doors’ nine studio albums – including three projects that released after the 1971 death of Jim Morrison – Los Angeles-born Krieger and Chicago-born Manzarek wrote a number of the Rock and Roll Hall of Fame-inducted group’s most popular songs.

To be sure, both the professionals are credited as songwriters on “Break On Through (To the Other Side),” “Light My Fire,” and “Hello, I Love You,” to name just some. Meanwhile, Krieger and Morrison are the lone songwriters on 1967’s “People Are Strange.”

Primary Wave hasn’t publicly revealed the transactions’ precise financials, though higher-ups did take the opportunity to emphasize that the Jim Morrison estate and “the legendary band’s drummer John Densmore retain their interests separately.”

Additionally, Primary Wave – which remains engaged in a legal battle concerning its purchase of James Brown’s catalog – is expected to coordinate with The Doors manager Jeff Jampol “to help drive opportunities across this rich catalog of music” moving forward.

(Aside from The Doors and Jim Morrison himself, Jampol Artist Management’s website shows that the company represents blues legend John Lee Hooker, whose estate announced a song-rights deal with BMG back in February of 2022.)

Addressing his decision to sell in a statement, Krieger said: “After 58 years, and the most magical of times, I’ve decided to sell my share of The Doors to Primary Wave. This will enable me to help the many charities I’ve been involved with, and some new ones too.

“I know Primary Wave cares about music, art, and about helping legacies go to even bigger levels. Our longtime Doors manager Jeff Jampol will still be protecting our legacy in partnership with Primary Wave, so I’m comfortable and happy with the future of The Doors,” he finished.

Since scoring a $2 billion investment from Brookfield Asset Management in October of last year, Primary Wave has purchased interests in the work of Joey Ramone, Huey Lewis and The News, and Whitney Houston songwriters Shannon Rubicam and George Merrill.

Link to the source article – https://www.digitalmusicnews.com/2023/01/23/the-doors-primary-wave-deal/

After THE CULT recorded 2001’s “Beyond Good And Evil” album, the band broke up and singer Ian Astbury performed with Ray Manzarek and Robby Krieger…

Sony [1,665 articles]”>Sony’s TriStar. Speaking about the film with MBW last month, Mestel, who is a co-producer alongside the likes of Clive Davis, said that,…

The Doors have released the song “Paris Blues,” the band’s “last known unissued studio recording.” “‘Paris Blues’ traveled a long and winding path to its…

Huey Lewis and The News performing live in 2016. Photo Credit: PaulHamaker Primary Wave has acquired the rights to the first seven studio albums from…

Jim Peterik — a songwriter and band member of The Ides of March, ’80s pop-rock band Survivor and southern rock group .38 Special — has…