The track itself, the band says, was written in 15 minutes with its vocals recorded in the backseat of Babcock’s car. The song’s video was directed by Whitney McConnaughy.

The Unraveling is out April 1 (and available for pre-order now), which band members Stefan Babcock, Nestor Chumak, Zack Mykula, and Steve Sladkowski recorded and mixed over five summer days in 2021. Grammy-award-winning producer Peter Katis hosted the band in his own home studio to create the album, and with more allotted time to do so because of the pandemic, PUP had the time to experiment and use instruments like piano, synths, and horns for the first time. Also while stuck in isolation, the band remotely teamed up with Sarah from Illuminati Hotties, Kathryn from NOBRO, Mel from Casper Skulls, and Erik from Remo Drive on the album.

The band has long been a favorite of ours, landing on our past two lists of the best rock bands.

Yes, PUP is going on tour! Tickets are on sale now for the band’s world tour, which includes festival stops at Coachella and Shaky Knees. The tour is set to take off in February with several dates throughout Canada, and after a couple of months performing in small venues in the U.S., PUP will return to Canada prior to their final dates in the UK, Australia, and Spain. 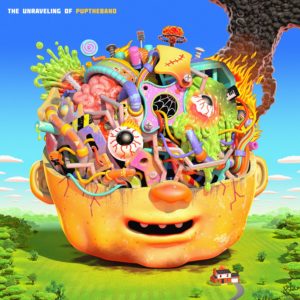 Link to the source article – https://www.spin.com/2022/01/pup-unveil-the-unraveling-of-puptheband-share-new-single/

PUP has released the last single, “Totally Fine,” off of their forthcoming record, The Unraveling of PUPTHEBAND along with an accompanying video. The video and…

PUP unveiled the latest single, “Matilda,”of their forthcoming record, The Unraveling of PUPTHEBAND.     “Matilda is the name of my favorite guitar,” guitarist Stefan Babcock…

Oh, here we go! PUP have announced their new album, the exceptionally titled ‘THE UNRAVELING OF PUPTHEBAND’. It will be released on April 01 via…

PUP has released “Waiting” and “Kill Something,” and unveiled concert dates throughout the U.S. and Canada for next year. The Canadian rock band’s two new…

PUP have shared a new single “Robot Writes A Love Song.” The track comes off their forthcoming album THE UNRAVELING OF PUPTHEBAND, out April 1 via…