RUSH guitarist Alex Lifeson has shared a previously unreleased instrumental song called “Cherry Lopez Lullaby”. The track arrives five months after the release of two new tracks, “Kabul Blues” and “Spy House”, which were made available to mark the occasion of his collaboration with Epiphone and the release of the new Alex Lifeson Epiphone Les Paul Standard Axcess guitar. Those two instrumental songs marked the first new music from Lifeson in close to a decade.

Regarding how “Cherry Lopez Lullaby” came together, Alex said: “This was written during the mix session of [RUSH‘s] ‘Clockwork Angels’ [album] while in L.A. for months starting early 2012. I did an interview with High Times and the interviewer brought along a friend, an esteemed grower who provided a sample of his creation named Cherry Lopez. Because I was on an EST body clock, I was up most mornings @ 5:00 AM. I’d order coffee, sit on my hotel room balcony, read the paper and wake and bake then dive into making some fun sounds while the city was waking up. I had some borrowed acoustic and electric guitars for the duration, thankfully, as sitting around waiting to go to the studio was tedious and certainly, a bowl of Cherry kept my appetite healthy.”

Earlier this month, Lifeson, who recently completed an album’s worth of material with former CONEY HATCH singer/bassist Andy Curran, was asked in an issue of Guitar Player magazine if he has any plans to play live in the near future. He responded: “I’m not really thinking about that. It’s challenging enough to try to get this album out first.

“To be honest with you, I don’t think I have it in me to go on the road,” he continued. “I mean, if it was a handful of shows, that might be kind of fun, but anything beyond that… After 40 years of sitting in hotel rooms, I’m not interested. I’ve had quite enough of that. I do love my home life.

“I thought I would miss being onstage a lot more, but I don’t really. I’ve done a couple of things here and there. Small things — usually it’s a charity event or something like that. It’s kind of fun getting up and playing with other people, but the whole production — the big, giant machine — it doesn’t really hold much appeal to me now.”

Four months ago, Lifeson spoke in more detail about his collaboration with Curran, tentatively dubbed ENVY OF NONE, in an interview with Sweetwater. At the time, he said: “Andy approached me about four years ago, shortly after the last RUSH tour, about just adding some guitar on some of the things that he was doing. And I did that. A few months later, he sent another one, and did that. And then we started getting more serious. And then we found a great singer, Maiah Wynne, from Portland, Oregon — just a fabulous, fabulous voice and a really smart songwriter and vocal performer. So we’ve basically done an album’s worth of material that we hope to release sometime soon. I’m really excited about that.”

Asked about a possible timeline for the release of his collaboration with Curran and Wynne, Alex said: “We’re just working on that part of it. All the music is recorded. We are mixing currently. We’re in a good place, but it’s very challenging. The industry is so, so very different than it was certainly 10 years ago, never mind last year. We’ll see. Hopefully late summer, early fall we might have something. But we are very, very excited about it. It’s pretty cool stuff, I think.”

Lifeson previously collaborated with Wynne on her 2019 solo single called “Fearless Girl”, which featured Alex and the Portland Cello Project. Wynne also laid down vocals on a May 2019 collaboration between multi-instrumentalist Marco Minnemann and Lifeson titled “Lovers Calling”.

RUSH drummer Neil Peart died in January 2020 in Santa Monica, California after a three-year battle with glioblastoma, an aggressive form of brain cancer. He was 67 years old.

RUSH‘s final show took place at the Forum in Los Angeles on August 1, 2015. Peart indicated at the time that he wanted to retire while he was still able to play well, along with a desire to spend more time at home with his young daughter.

Lifeson and bassist/vocalist Geddy Lee have repeatedly said that RUSH will never do a show unless all three musicians agree to take part. They haven’t performed as RUSH without Peart since he joined the band in 1974. 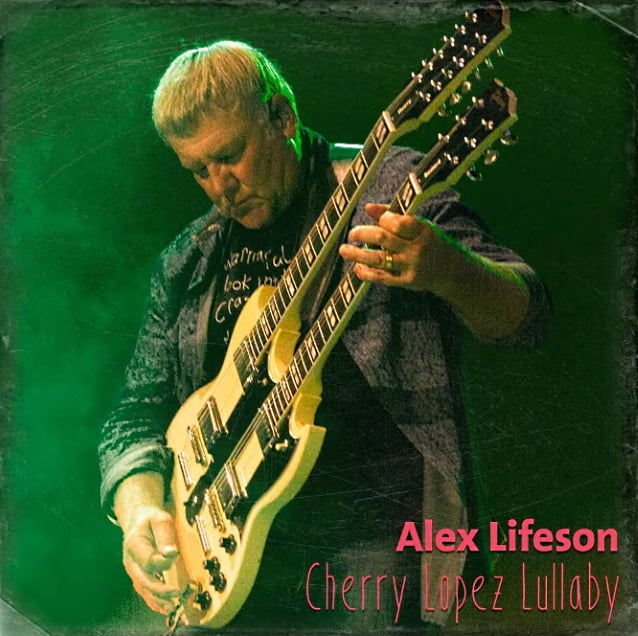 Link to the source article – https://www.blabbermouth.net/news/rushs-alex-lifeson-shares-previously-unreleased-instrumental-solo-song-cherry-lopez-lullaby/

Rush guitarist Alex Lifeson has opened up about how it was difficult to accept the band was over, even after 41 years together. Lifeson says he’s…

Alex Lifeson explained why he plays only one guitar solo on the debut album from the new band Envy of None, adding that he felt…

According to RUSH fan blog Rush Is A Band, RUSH guitarist Alex Lifeson has shared a new video update for his AlexLifeson.com newsletter subscribers. In…