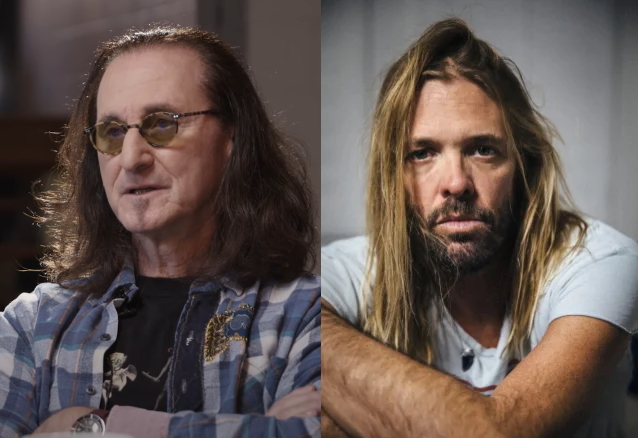 Geddy Lee and Alex Lifeson of RUSH recently sat down for an interview in Toronto for “House Of Strombo”, a free-form radio talk program hosted by Canadian television and radio personality George Stroumboulopoulos. In this exclusive conversation, Lee and Lifeson talked about the 40th anniversary of their eighth studio album “Moving Pictures”, the loss of RUSH drummer Neil Peart, grieving in public, their new perspective on time, the music industry today, being booed off stage, getting high before rehearsals, Taylor Hawkins and more.

Reflecting on the recent passing of the FOO FIGHTERS drummer, Geddy said: “Heartbreaking — just heartbreaking. That really broke my heart, his passing. [He was] so full of file. I remember when he presented the [Rock And Roll] Hall Of Fame award to us in 2013 and we came up on stage, he was literally jumping up and down like a two-year-old — he was jumping up and down, he was so happy — and that was him. He was so full of admiration and rock and roll joy juice. And it just seems wrong that he left us.”

Hawkins and FOO FIGHTERS leader Dave Grohl gave the speech for RUSH when the prog-rock legends were inducted into the Rock And Roll Hall Of Fame, and the FOO FIGHTERS duo then performed “2112” alongside RUSH during the Rock Hall ceremony.

After Stroumboulopoulos asked Lee what Hawkins said to him when he presented him with the Rock Hall award, Geddy said: “He just gave me a big hug. He just sent me an e-mail like a month ago — just checking in. That’s what he would do; he would just check in.”

When Hawkins‘s death was first announced in late March, Lee released a statement on social media in which he said: “We are so very shocked and saddened to hear the devastating news of the sudden passing of our musical brother Taylor Hawkins. He was such an incredibly positive source of music, energy and love, and a true artist to his very core…there are simply no words to adequately express just how much he will be missed by all — including Alex, myself and the entire RUSH family. Our hearts, love and sympathy go out to Taylor‘s family as well the Grohls, and the extended FOOs family…”

In a separate post on his personal Instagram account, Lee reflected on the time he and Lifeson joined the FOO FIGHTERS onstage during a concert in Toronto.

“My heart is truly breaking at the news of Taylor‘s passing. A sweetheart of a man that radiated good vibes, a love of music, and a total monster on the drums,” Lee wrote. “He was so, so happy the night Alex and I came up onstage to play YYZ with him during the FOOs show at the Air Canada Centre on March 23rd, 2008… His excitement was almost impossible for him to contain. Brother, you left us way, way too soon… rest in peace my friend…”

When Peart died in January 2020, Hawkins said in a statement to Rolling Stone: “Neil Peart had the hands of God. End of story.”

Link to the source article – https://www.blabbermouth.net/news/rushs-geddy-lee-taylor-hawkinss-death-really-broke-my-heart/

Geddy Lee explained how the death of Taylor Hawkins affected the chance of a reunion with former Rush colleague Alex Lifeson. The Canadian band –…

Rush‘ Geddy Lee has opened up on the affect of Taylor Hawkins‘ death on him, saying the Foo Fighters drummer’s passing “broke my heart”. The Foo…

Sir Paul McCartney has paid tribute to Taylor Hawkins, sharing a statement honouring the late Foo Fighters drummer and looking back on their collaborations, along…

Foo Fighters drummer Taylor Hawkins has died. The news was confirmed overnight – March 26th – with the musician reportedly found dead in a Colombia…