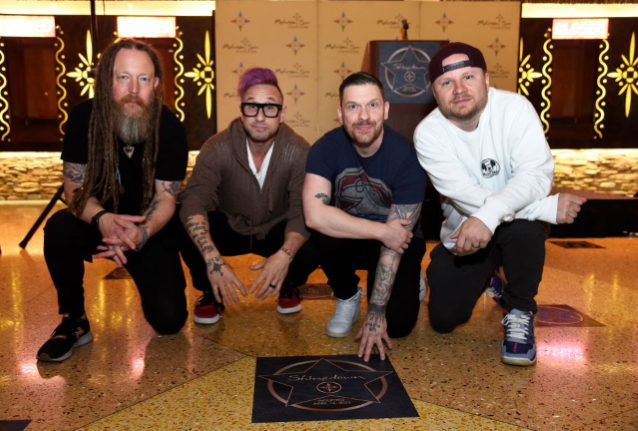 On Saturday, April 16, Uncasville, Connecticut’s Mohegan Sun honored the 36th inductee of its Walk Of Fame, SHINEDOWN, ahead of the band’s sold-out show that evening. President of sports and entertainment at Mohegan Gaming & Entertainment, Tom Cantone, presented the record-breaking rock act with the Walk Of Fame star.

“They’ve broken every record — I can’t even list off the things they’ve done. 10 million records sold, billions of streams, they’re [everywhere] on the Billboard charts. They’re awesome and incredible,” Cantone said before introducing the band amongst an eruption of cheers and applause.

SHINEDOWN members Brent Smith (vocals), Zach Myers (guitar), Eric Bass (bass, production) and Barry Kerch (drums) were in attendance to accept the award in front of a large crowd of their most dedicated fans.

“We love playing this arena,” Myers told the crowd after accepting the award. “It’s probably one of our most favorite arenas to play in, and I’m not just saying that. Everybody here has always been so amazing to us, and every time we come, you guys sell it out. Thank you very much, seriously. It means the world to us to come to this part of the world and have you guys show up.”

SHINEDOWN performed to a sold-out crowd on Saturday evening as part of its “Planet Zero” world tour, with DIAMANTE and THE PRETTY RECKLESS as support. It was SHINEDOWN‘s fifth sold-out show and sixth performance at Mohegan Sun Arena since first playing in 2010.

The Walk Of Fame award recognizes individuals who have made significant contributions to the success of Mohegan Sun as the Northeast’s premier entertainment destination. All of the individuals inducted into the Mohegan Sun Walk of Fame have their name engraved on a plaque that is permanently located at the entrance to Mohegan Sun Arena.

BON JOVI, KISS, Rod Stewart, Taylor Swift, MÖTLEY CRÜE, Keith Urban, NEW KIDS ON THE BLOCK and so many more have been honored as Mohegan Sun Arena Walk of Famers and have stars lining the floor outside of the Mohegan Sun Box Office.

SHINEDOWN has sold more than 10 million albums and 10 million singles worldwide, earned 14 platinum and gold singles, six platinum and gold albums, 17 No. 1 Active Rock hits, and amassed more than 4.5 billion total streams. They were recently named No. 1 on Billboard‘s Greatest Of All Time Mainstream Rock Artists chart after totaling 17 No. 1 singles on Billboard‘s Mainstream Rock Songs Chart — the most in the history of the Billboard chart. Each of SHINEDOWN‘s 28 charting singles on Billboard‘s Mainstream Rock Songs Chart has reached the Top 5 — an unparalleled achievement — and they hold the record for most Top 5 singles ever on this chart.

Mohegan Sun Arena finished 2021 with its first “#1 Indoor Arena” ranking for its capacity in the world according to Pollstar and VenuesNow, ranked among the top 10 venues in the U.S. regardless of size based on ticket sales, and was named “2021 Innovator of the Year” by Celebrity Access for its ViacomCBS residency. In recent years, the “Most Beloved Venue in America” has also been the “#1 Casino Venue in the World,” “#1 Social Media Venue in the World” and a seven-time national award winner for “Arena Of The Year.” 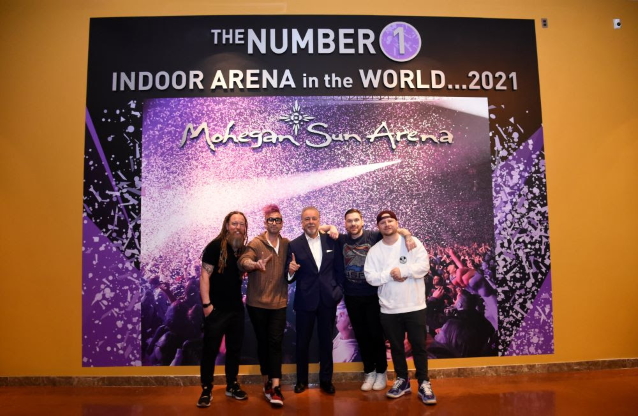 Link to the source article – https://www.blabbermouth.net/news/shinedown-inducted-into-mohegan-suns-walk-of-fame/

April 12, 2022 Uncasville, Connecticut’s Mohegan Sun has announced that SHINEDOWN will be the newest Walk Of Fame inductee — the 36th group or individual…

April 24, 2022 In a new interview with Dave Doran from Rock 105 and 95.5 radio stations, SHINEDOWN guitarist Zach Myers was asked how he…

Shinedown continue to set rock chart records right and left, and their latest mark of distinction has the band moving into a tie for the…

September 2, 2022 SHINEDOWNhas released a brand-new Amazon Original of the band’s current hit single “Daylight”, available now only on Amazon Music. The track is…

Five Finger Death Punch have a way to go before claiming the most No. 1’s on the Billboard Mainstream Rock Chart, but they did just…