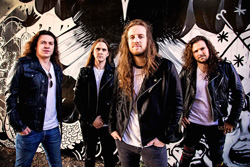 Canadian shredders Striker will be hitting the road in April and May 2022 to support Finnish heavy metallers Beast In Black for their first North American headlining tour along with Florida power metal warriors Seven Kingdoms.

Before kicking off the first date of the tour in Orlando, FL on April 7th, Striker are unveiling their latest single “Strange Love” with a new music video that features the debut of the band’s latest lineup addition of long time friend and guitarist John Simon Fallon (The Order of Chaos).

“Strange Love” is the band’s first new music of 2022 since releasing their previous single 2021’s “Deathwish”. The band is currently in songwriting mode for their follow-up record to their Juno award-winning album 2018’s “Play To Win.”

“When we wrote ‘Strange Love’ we were dabbling in the dark arts of funk, and although it really doesn’t sound like it we drew big inspiration from bands like Extreme and Faith No More. It was a bit of a detour on our metal journey, but it was a lot of fun to record. We have one more song to release from that recording session too, which leans even further into that style so keep an eye out for that!” adds vocalist Dan Cleary.

Link to the source article – http://www.metalunderground.com/news/details.cfm?newsid=152959

Next week, New Orleans, Louisiana sludge metal trailblazers Crowbar will drop their long-awaited new full-length, “Zero And Below” via MNRK Heavy. In advance of the…

Congrats to Halestorm, who now have their first platinum-selling album courtesy of their 2012 release, The Strange Case Of… The album was initially released on…

Finnish Melodic Metal band Gladenfold are going to release their third studio album, “Nemesis,” on April 29th via Reaper Entertainment. As a kick-off, the band…

“Halo,” the new masterpiece from Finland’s melancholic progressive metallers Amorphis will be released via Atomic Fire on February 11th. In advance of the record’s official…