Openly Christian rockers STRYPER have released a new single, “See No Evil, Hear No Evil”. The song will appear on their upcoming studio album, which is due later this year via Frontiers Music Srl. The follow-up to 2020’s “Even The Devil Believes” was produced by guitarist/vocalist Michael Sweet and was once again recorded at SpiritHouse Recording Studios in Northampton, Massachusetts.

Sweet stated about the track: “‘See No Evil, Hear No Evil’ was, believe it or not, inspired by the health issues that Oz [Fox, guitar] and I have been faced with. Despite our limitations, we were able to deliver an album that is powerful and relevant and ‘See No Evil, Hear No Evil’ is the perfect track to showcase that. We could not be more excited about this album! The best is yet to come.”

“See No Evil, Hear No Evil” follows last month’s successful release of another new single, “Rise To The Call”, which has been receiving praise from press and fans alike in the buildup to STRYPER‘s new LP. The effort firmly continues the trend established over the band’s last few albums, with STRYPER growing heavier while also maintaining their trademark melodies, virtuoso guitar playing, and air-tight rhythms.

When “Rise To The Call” was first released, Sweet commented: “Although we have faced many obstacles over the past few years, we were somehow able to rise above everything that stood in our way and deliver (what I believe to be) our strongest release to date.

“Our new album encompasses everything that defines who we are: faith, guitar power, melodies and harmonies, consistency and longevity.

“We still have so much left to say musically and lyrically and this album showcases that. We couldn’t do it without the fans worldwide. Those who have stood by us through it all, for almost 40 years!

“We’re so honored and blessed to be able to release our 14th studio album and to be making the best music of our lives/careers. Against all odds, we’re still here.”

This past January, the 59-year-old Sweet, who recently underwent surgery for a re-detached retina, said that he was “more concerned with the state of our world” as he continued to work on lyrics for the band’s upcoming 14th studio LP. At the time, he wrote on his social media: “I’ll be honest. I’m a little nervous about the new album. Not the music itself but more so the process.

“We’re obviously not operating at 100%,” he continued. “Oz [Fox, STRYPER guitarist] lost the hearing in his left ear and I’ve lost my vision (hopefully and prayerfully short term) in my right eye. We’ll be working this way and it’s certainly a first. How will it affect our performances? Not much. It most likely will take a little longer to get what we want but maybe not. We’ll have to see how that goes.

“I’m also at that place where I’m more concerned with the state of our world. I’m concerned about what I see on the news. Is it just me or does it feel as though we’re in a much darker place these days? Our country, our world. Maybe I’m wrong but it feels as though darkness is overtaking the light. People seem much colder and more concerned about themselves than they do others. There are some good people out there but times are definitely changing sadly.

“So, as I’ve been facedown I’ve been writing lyrics and although there are some straight up songs about love, there’s more of a take on the state of this world with lyrics that definitely address that,” Sweet added. “Maybe, just maybe this album will shed a little light into and onto some dark areas. That’s always my goal and always my desire. To help, not to hurt. To heal, not to damage. This is my intention with every song I write.”

In December, Sweet stated about the musical direction of STRYPER‘s new material: “Lots of riffs, grooves, up tempo and mid tempo and everything has a great feel to it. I’ve only sent music to the guys so they haven’t heard any melodies yet but the melodies are strong and powerful.

“It’s always a little strange talking about your own music but I can say that I’m really excited about the direction of this album! I know you will be too. We’ve tuned down to D so the tuning makes it all sound a little fatter and heavier. There are a few songs with the low E string dropped down another step (C) so those songs have a bit more meat and potato’s as well;-) There are a few ballads but they’re not your typical ‘piano’ or ‘acoustic’ ballads. They’re heavy as well and definitely guitar driven.

“Even though there have been obstacles along the way, this album really has shaped up to be an amazing piece of work,” Sweet added. “We’re a long way out but man, I can’t wait for all of you to hear this!!”

In March 2021, Fox underwent the first of his brain surgeries to treat one of the tumors that were found in his head more nearly four years ago. That same month, STRYPER and Frontiers Music Srl announced that they have extended their working relationship for the release of more new studio albums together.

STRYPER and Frontiers originally joined forces in 2013 for the release of “Second Coming”, an album comprised of new recordings of 14 songs from the band’s early years, as well as two brand new songs. What followed has been a string of critically and commercially successful studio albums, including “No More Hell To Pay” (2013),“Fallen” (2015),“God Damn Evil” (2018) and “Even The Devil Believes” (2020). Additionally, a live album and long-form video, “Live At The Whisky” (2014) was made available. Every one of the albums released on Frontiers in the past nine years has successfully charted on the Billboard 200 chart and topped the Hot 100, Rock, Hard Rock, Current and Christian Music album charts.

STRYPER is one of the most well-known metal bands to emerge from the fertile ’80s metal renaissance over three decades ago. The band first landed on the global scene in 1984 and and is responsible for such classic ’80s metal albums as “Soldiers Under Command”, “To Hell With The Devil” and “In God We Trust” and hit singles/videos such as “Calling On You”, “Free” and “Honestly”. To date, the band has sold upwards of eight million records worldwide and is a Dove Award winner and Grammy nominee. STRYPER was also the first band to have two songs in MTV‘s “Top 10 Video Countdown” simultaneously.

After being on a hiatus for much of the ’90s, STRYPER returned stronger than ever in the early 21st century. Musically, the band has progressed and grown their fan base steadily and continuously, being one of the few “classic” metal bands of the ’80s that managed to keep themselves front and center thanks to the consistency of their musical output. 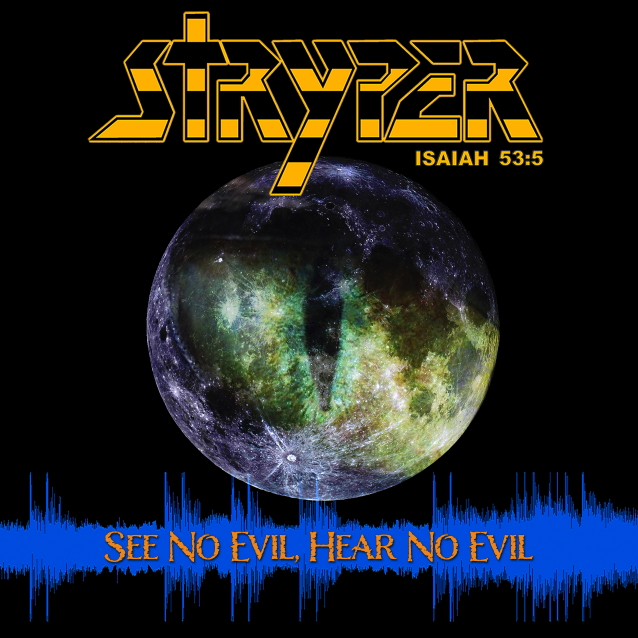 Link to the source article – https://blabbermouth.net/news/stryper-shares-new-single-see-no-evil-hear-no-evil

Openly Christian hard rockers STRYPER have released a new single and lyric video, “Rise To The Call”. The song is taken from their upcoming album,…

Michael Sweet of openly Christian hard rockers STRYPER has completed the songwriting process for the band’s upcoming album. The follow-up to last year’s “Even The…

April 6, 2022 Michael Sweet of openly Christian rockers STRYPER has shared a snippet of a song that will appear on the band’s next album.…