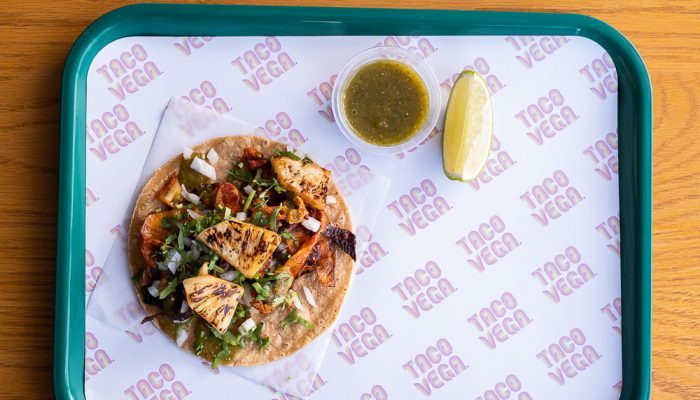 Jared Simons will tell you that, first and foremost, his true passion lies in hospitality. However, the down-to-earth creator of Los Angeles-based Taco Vega also knows his way around the kitchen and creating food from the heart. Growing up in San Diego, Simons was exposed to three pivotal things: amazing surf, great music and incredible Mexican cuisine. It’s these three components that make up the DNA of Taco Vega, an homage to the comfort food he grew up eating after a long day at the beach and the warm, vibrant atmosphere of his hometown.

Simons embraced these roots and opened Taco Vega in the heart of Los Angeles on Fairfax Avenue, an area commonly known as the epicenter of streetwear and designer luxuries. However, at Taco Vega, Simons was able to achieve something truly remarkable with its menu, and that is its dedication to serving healthy, locally sourced plant-based food.

Read more: A beginner’s guide to Green Day: from the big hitters to the deep cuts

Even the non-veg diner will find a place at home inside Taco Vega, with a menu that could be better described as “innovation food” and not simply “substitution food.” Simons is of course passionate about clean living, healthy diet and structured exercise, but his take on a plant-based lifestyle is in no way exclusive or judgmental. In fact, Simons simply wants Taco Vega to be a healthy choice for all eaters while also keeping in mind the positive effect that a plant-based diet can have on the environment and overall health.

I wanted to get an insight into this venture of making plant-based food at Taco Vega. It’s just really clean, amazing food. I wanted to get your perspective on your journey into your art, your health and how that came together. I think the world’s going to discover this and just fall in love like the way I have.

For me, I don’t think I love food necessarily. I think I love hospitality. I think that I’ve found that cooking at No Name, going through that process, I’ve cooked for so long [that] I’m just good at it, but it wasn’t the food. Granted, I was a heavy kid. I love eating, but I think I just love hospitality more than food. What I’m doing has become my lifestyle, so with the plant-based cooking, just eating cleaner, training, I think that’s why I’m not on a mountaintop yelling at people to eat vegan. I think I just live my lifestyle, and it can be a good example of you are what you eat. It’s allowed me to do six Ironman triathlons and feel better than I ever have.

The hospitality comes through. With all the things we’ve talked about over the years, I don’t know that we’ve ever really discussed music. Where did you grow up? Did you grow up around music?

Well, I grew up in San Diego, so Southern California, and a lot of Taco Vega and the venue is inspired by [that]. [Mexican cuisine] was what I ate post-surfing as a teenager, and driving home from the beach, you stop and get a California burrito, you get a fish taco, you get those asada fries. So there’s a lot of influence from that. I grew up wrestling. I played football as well at a young age, so [I was] always athletic. It was actually a wrestling injury that sidelined what I thought might be a college career.

I was working in a restaurant [in the] mid-’90s. It was definitely like a scene from an Anthony Bourdain book. You had the crazy chef smoking some pot, listening to rock ’n’ roll on the boombox. I had dyed my hair red, and the owner got upset and wouldn’t allow me to work in the dining room with the red hair. So [they sent me] back to the kitchen to wash pots and pans. Being a heavy kid, I always enjoyed eating food. So I thought, “Why not wash dishes and hang around the kitchen?” Then, like I said, the injury sidelined wrestling, so when it came time for college, I told my folks I had applied to all the UC schools, and I actually never really did and just sent an application to California Culinary Academy up in San Francisco and had decided I wanted to become a chef.

My first job was washing dishes in a kitchen at a place called Ledo Pizza. These twins who worked there had the tape of this new band called Green Day. It was the Lookout! Records early Green Day—Kerplunk! and Slappy Hours—and they played Bad Religion, Operation Ivy, stuff like that. In the kitchen, you got the boombox—exactly the same thing. What were the bands that you were playing? Was it more like Zeppelin, or was it punk?

So it was [the] mid-’90s, and I think there were a few components. One, my stepbrother was a little bit older than me, finishing high school in the late ’80s. So I’d go to the beach with him listening to a lot of new wave, alternative type stuff, which is probably my favorite genre of music—new wave, darkwave, a little bit of post-punk. That’s where I like to live.

Then when I start working in this restaurant, it’s the mid-’90s, so [it was] some more of that poppy punk, a little bit of ska, like Mighty Mighty Bosstones type stuff. Then [there was] a busboy that was working there. He was from Mexico, and he was obsessed with the U.K. He had these Doc Martins with the Union Jack on the toes, and he gave me a copy of “Anarchy In The U.K.” Then the chef was into more current ’90s rock, so more like that Pearl Jam type stuff, a little bit of grunge.

But, as a kid, I learned to play the saxophone, and when I got to high school, I had to make the decision if I wanted to go down the band route or the football route, and it was definitely football. I wasn’t that into it, but I have always enjoyed ’40s jazz, Glenn Miller type stuff. Also, as a kid, my grandfather had a 1977, maybe ’78, Mercedes. When he bought it, it came with a cassette tape of big-band jazz that he would always listen to, so anytime we were with our grandfather, we were always listening to that stuff in the car. We just loved it, my brother and I. So I’m a little all over the place in regards to music, but after the new wave, darkwave [music], it’s definitely ’50s rock ’n’ roll, rockabilly. That’s my jam.

Taco Vega doesn’t feel like substitution food. It feels more like innovation food. What would you suggest if I’m coming in there and I’m not the biggest plant-based head?

I always tell people for tacos, if it’s your first time, grab an asada, grab a Baja taco, grab a poblano. That covers your meat, that covers your fish and that covers a cheesy vegetable dish. Those are the things that most meat-eaters gravitate to. I’m just trying to provide things that are familiar to omnivores—familiar textures, familiar flavors. That’s your key. That’s what gets an omnivore to eat plant-based, so those are my three go-to tacos for a first-timer.

With the menu, it was inspired by growing up in San Diego. I’m not trying to force health food down people’s throats. You can get asada fries and nachos, which a lot of the kids off the street love to do. All the tacos are pretty clean, same as the burritos. But you can also get more nutrient-dense stuff in the bowls, and you have plenty of options. I think that just gives it a nice balance for everyone out there to come and try it.

I think at the end of the day, I just want to provide a place that’s a better food choice. Whether you want to eat plant-based because you want to feel better with your own health or you’re eating plant-based for the sustainability of the planet, it provides a solution, which I think is really important, especially in the world today.

The post Taco Vega is out to prove that comfort food can also be healthy food appeared first on Alternative Press.

Link to the source article – https://www.altpress.com/features/taco-vega-jared-simons-interview/

During a chat with EMP at this month’s Bloodstock Open Air festival, NAPALM DEATH frontman Mark “Barney” Greenway spoke about his adoption of a vegan…

Lil Nas X and Taco Bell are partnering together to bring the artist into the company in a huge way. The fast-food chain announced today…

Lil Nas X has rejoined the Taco Bell workforce in the newly established honorary role of chief impact officer. As Billboard reports, the arrangement will…

During a recent chat with Interview Under Fire, SEPULTURA frontman Derrick Green, who went vegetarian when he was just 15 years old, was asked if…