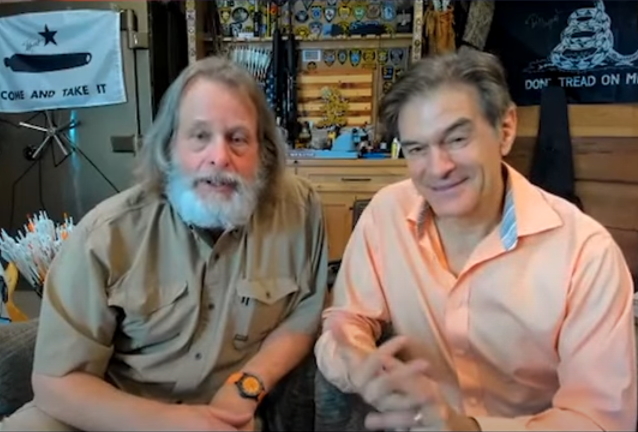 Ted Nugent has endorsed TV personality-turned-politician Dr. Mehmet Oz for the U.S. Senate ahead of the Republican primary in Pennsylvania.

The outspoken conservative rocker voiced his support for the celebrity heart surgeon-turned-politician during Monday’s (April 11) edition of “The Nightly Nuge”, a news-style clip in which Ted offers his take on the news of our world every night.

Appearing on the program alongside Dr. Oz, Nugent said in part (as transcribed by BLABBERMOUTH.NET): “Dr. Oz is running for U.S. Senate in the great Keystone State of Pennsylvania. And I know Pennsylvania. And there’s been a lot of lies about me over the years. And I wanna help someone who clings tenaciously and absolutely to those conservative values of God, family, country, law and order.

“I’ve invited [Dr. Oz] into my home because I care,” Nugent continued. “I do the most diligent, intense research I can before I endorse somebody, but I have come out and I have endorsed Dr. Oz. And some other very influential politicos, shall we say, have followed my lead… Tonight, I think a very influential young man has followed my lead and endorsed Dr. Oz. President Donald Trump, who I dearly love and respect, has now endorsed Dr. Oz. And you know that you take a chance endorsing someone because it’s impossible to know everything.

“I believe in this man. I believe that he represents the quality core values that makes the Nugent family have a great American Dream, that has everybody have an American Dream.

“I know Pennsylvania. I am Pennsylvania. I know the core values of those hunting, fishing, trapping, farming, ranching, hard-working entrepreneurs, those people that get up early every day to be the best that they can be. I’m here to tell you — my name is Ted Nugent, and Dr. Oz represents that spirit.”

Oz, a celebrity doctor with a long-running daytime TV show, is running for Senate to succeed retiring GOP Senator Pat Toomey in the key swing state, which voted for Trump in 2016 but was one of several that flipped to Joe Biden in 2020.

Oz, whose TV career began on Oprah Winfrey‘s show, has over the years come under fire for espousing questionable on-air medical advice. Back in 2015, a group of prominent doctors accused Oz of displaying “an egregious lack of integrity by promoting quack treatments and cures in the interest of personal financial gain.”

Link to the source article – https://www.blabbermouth.net/news/ted-nugent-endorses-dr-oz-for-u-s-senate-in-pennsylvania/

Ted Nugent has blasted a former top speechwriter for George W. Bush for criticizing Donald Trump Jr. over a recent speech in which the former…

In a new interview with retired boxer David “Niño” Rodriguez, Ted Nugent was asked why he hasn’t yet collaborated on music with fellow outspoken conservative…

Ted Nugent has once again railed against large social-media companies that block users from their platforms. The outspoken conservative rocker is an ardent supporter of…