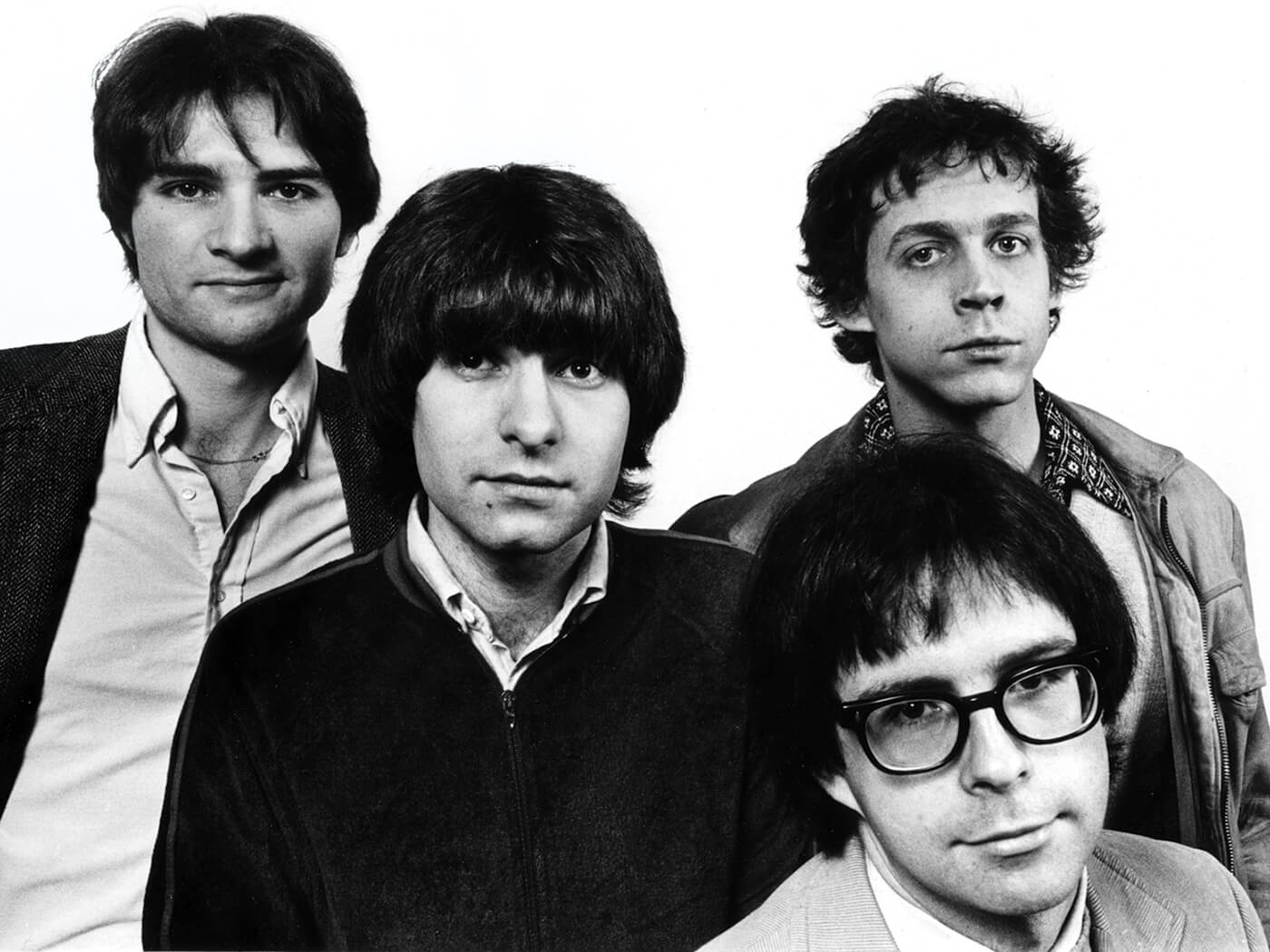 In the halcyon days of New York punk club CBGBs, there was a pinball machine located in the furthest corner away from the stage. In his memoir Spy In The House Of Loud: New York Songs And Stories, dB’s co-leader Chris Stamey remembers being drawn to that part of the room on the (frequent) occasions when the band on stage wasn’t quite as thrilling as legend would have you believe.

He wrote: “When a skilled player like Dee Dee Ramone nudged it just the right way, making all the lights go off at once, I would see that old pinball machine as a metaphor for what great rock records should do: trigger some kind of instant deep-brain response, bypassing the critical facilities, beyond analysis. Just neurons flashing all over the place…
We wanted to shove the machinery. To make the lights flash off and on.”

In their initial burst of creativity, The dB’s managed to do that spectacularly well, two indie singles and a pair of UK-released 1981 LPs – Stands For deciBels and Repercussion – representing a dizzying synthesis of Television, fellow Southerners Big Star and their British Invasion heroes The Move. However, beyond the most fanatical outposts of the worldwide record shop archipelago, the guitar-and-vocals duo of Stamey and Peter Holsapple, bassist Gene Holder and drummer Will Rigby never gained much purchase, their lasting influence confined to fingerprints faintly discernible on the next generation of jangly US underground bands – REM, The Replacements, et al.

This new collection of low-budget recordings and rediscovered live material (parts of which were previously available on 1993’s Ride The Wild Tom-Tom set) captures The dB’s’ sketchy formative years, with their first low-budget A-sides – 1978’s (I Thought) You Wanted To Know, recorded with wayward Television guitarist Richard Lloyd, and the 1980 version of Holsapple’s breakneck Black And White steered by future REM co-producer Don Dixon – receiving their first official reissue. It captures a fleeting moment when The dB’s should have become power-pop contenders, and highlights the cubist twists and baroque underpinning that would condemn them to become one of the archetypal cult bands.

While they made their name in New York, all four dB’s came from Winston-Salem, South Carolina, where they had been playing in bands since the turn of the 1970s. Still teenagers, Stamey and Holsapple played alongside future Let’s Active kingpin Mitch Easter on a $1,000-valued home-released LP as Rittenhouse Square in 1972. An impatient jumble of The Kinks, Yes and Mountain, it’s not a record Holsapple plans to reissue. “It’s considered a collector’s item by people who have obviously never heard it,” he tells Uncut with a sigh. “Save yourself several hundred dollars and listen to it on YouTube.” Informed by Television, The Flamin’ Groovies and the (very local) success of Alex Chilton’s Big Star, Stamey and Rigby then came together to form Sneakers, who put out a quirky 1976 EP on Stamey’s own Carnivorous label (later renamed Car, and perhaps most famous for releasing Chris Bell’s I Am The Cosmos – the only solo record the ill-starred Big Star man put out in his lifetime).

All those years of gigging on the margins ensured that, by the time they started to rematerialise in New York in 1977, The dB’s had a command of musical dynamics that few of their DIY contemporaries could match. Their live version of The Beatles’ Tomorrow Never Knows on this new collection is a case in point, the foursome taking perverse delight in delivering a perfectly hand-whittled take of a song that owed its existence to tape manipulation and studio trickery.

Such old-school skills helped Stamey link up with Lloyd, who went uncredited on the glorious (I Thought) You Wanted To Know – recorded with Stamey, Holder and Rigby – because he was still under contract with Elektra. However, The dB’s were not quite a functioning outfit until Holsapple arrived – fresh from an unhappy spell in Memphis. Taking courage from the taut sound of Elvis Costello & The Attractions’ This Year’s Model, the four-piece dB’s came on like a Ramones-paced ? And The Mysterians with occasional Van Der Graaf Generator time signatures.

(I Thought) You Wanted To Know shows that they cannibalised the odd song from members’ past lives (The Sneakers’ Let’s Live For The Day, and Death Garage”– the B-side of a solo Holsapple single, Big Black Truck, released on Car in 1978), but generally started afresh. Adopted by Alan Betrock, founder of New York Rocker, they recorded on four-track after hours in the magazine’s offices, but despite an abundance of killer choruses, never had much faith that the straight record industry would give them their due.

Stamey’s sardonic My Sire Wristwatch – never recorded in a studio but salvaged from a live tape – mocks a ‘new wave’ promotional item supposedly given away at a time when Seymour Stein’s label were trying to scrub the word “punk” from the musical lexicon, pointedly quoting their “new wave” slogan: “You better get behind it before it gets past you.”

However, their disdain for the dumbed-down music business conformity was married to a profound faith in what pop music could do. The dB’s were unashamed of their pre-revolutionary influences, performing loving covers of The Chambers Brothers’ Time Has Come Today and a Byrds-y take on Bob Dylan’s My Back Pages here, but they arguably had better songs of their own. The rough early versions of Holsapple’s Bad Reputation and the Sister Lovers-style Nothing Is Wrong are glorious, while Stamey’s mastery of lopsided writing is underscored by the fact that he had enough A-material to abandon Everytime Anytime and Tell Me Two Times before The dB’s got to record a proper album.

With Betrock as nominal producer, The dB’s started recording Stands For deciBels in 1980, but were unable to find the funds to finish it off, management company-turned-UK label Albion ultimately picking the band up and making a quixotic attempt to break them in Britain. The label resorted to spectacular gimmicks to try and draw attention to Stands For deciBels (cassette copies came in a ludicrous tin can) and Repercussion (each copy came with a cassette sellotaped to the front), but good reviews never translated into sales.

Stamey quit, leaving Holsapple to lead the band through two further albums (Like This and The Sound Of Music) before he became better known as the unofficial fifth member of REM on Green and Out Of Time. The dB’s continue to kind of exist; the original lineup made Falling Off The Sky in 2012, while Goin’ To The Club from this record comes with a new Stamey vocal, and he says he would have prodded his bandmates into re-recording a few more of the tracks here were it not for the pandemic.

However, if that would have been interesting, the joy of the eavesdropped recordings on (I Thought) You Wanted To Know comes in the unvarnished edges. Listen carefully and you can hear the shape of the back rooms and half-empty venues where The dB’s spun gold. Both Holsapple and Stamey have mixed feelings about their singing on these recordings, but if the high harmonies on this version of Dynamite and the glorious What’s The Matter With Me? are not perfect, they encapsulate The dB’s’ delight in creating this spectacular music for the pure joy of it; all those flippers flapping, bumpers bumping, everything flashing at once.

The post The dB’s – I Thought You Wanted To Know appeared first on UNCUT.

July 2, 1980. The drinks and hot dogs were on special offer on the quiet Wednesday when The Replacements played the Longhorn, the ex-steakhouse that…

LCD Soundsystem‘s James Murphy has reflected on his experience collaborating with the late David Bowie on his final album Blackstar, revealing that it “broke his…