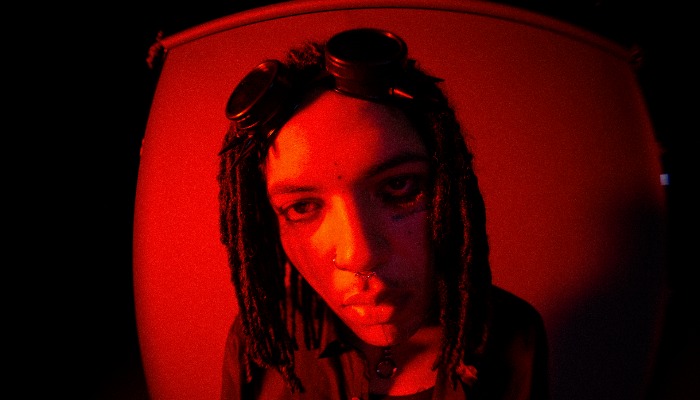 POORSTACY’s second album, Party At The Cemetery, is here just in time for the Halloween season. On the new record, POORSTACY builds upon the eerie nature of his music by bringing a more cinematic approach to the sound.

In a number of ways, Party At The Cemetery is the audible equivalent of a horror film, something shown by his appreciation of the genre. Rather than taking inspiration from a specific horror film, POORSTACY focused on constructing a particular atmosphere for the release.

The end result is an album that, as he describes it, gives off “creepy carny vibes.”

To achieve this frightening sound, POORSTACY uses his love of cinematography blended together with his musical expertise in a wide range of styles, including horror punk, metalcore and emo.

Accompanied by a medley of distressing sounds, ranging from unsettling shrieks and vocals to the piercing sounds of instruments and effects, Party at The Cemetery is ready to become one of the perfect soundtracks to the wonderfully spooky season of Halloween.

Ahead of the record, Alternative Press spoke with POORSTACY on how his love of films heavily influenced the approach for the new album, plans for an upcoming tour and what the time means for him.

I read that you take a lot of influence from movies. Is that the case with this album too?

Movies influence everything. I’m a movie fanatic. I would say for the theatrical purposes and the production and how creepy everything is, yeah. It’s more sound design and me just fucking with frequency, but I would say I take a ton from movies. Visually, we’re going to be incorporating that a lot more now.

I take things day by day. Not as far as the song-making process goes. I don’t even make music all the time. I wouldn’t say I’m someone that’s in the studio constantly making music, trying to pump out as [many] records as possible. I despise that because I don’t think that anybody has that much shit to talk about. I think you have to experience things and come up with things and figure out what to talk about to actually make records. I self-destruct to make music.

Are there any movies you were thinking of in particular?

I couldn’t say that I went into anything with a specific movie in mind. There’s definitely a carny essence to it. It’s more of a creepy carny vibe than a specific horror film.

How’s getting ready for tour going?

The whole tour is gonna be super fucking creepy. It’s a masquerade. POORSTACY’s deeper than music. It’s not just music. It’s a world [where] I want to portray things that I like and things that I’m interested in, like masquerade culture, fashion culture, choreography, ballet. All these different things [are] going to be incorporated into the show, even down to the root and core of what shows I started going to, like drum-and-bass and deep house music and deep electronic music.

You seem to be really busy. How do you have time for all of it?

I feel like I’m actually never busy. I have nothing but infinite time. I’m a very out-of-it person. I’m a very weird person—I have a weird aura, a weird vibration, a weird energy. I don’t feel like I vibrate anywhere specifically. I’m very all over the place. I feel like I’ve never had structure. I dropped out of school in ninth grade. I’ve never applied myself to anything except what I’ve wanted to. I created my world based on my ideas and what I look at. So I’m not programmed by anything outer. That leaves me in a very weird space mentally. I’m very tapped out of this world.

Do you feel like that comes through in your music?

It definitely does. It’s a part of the frustration and everything. It’s a part of why I started making music in the first place. I don’t know how to socialize properly. I never asked for attention. I never wanted it. I never begged for it. I knew I had to make money. So I put music out. I never expected anything. It all went the way it was supposed to go. I’m just here going with the flow. I’m just on the roller coaster.

Read the full interview in issue #399, available to purchase here.

The post The story behind POORSTACY’s horror-influenced ‘Party At The Cemetery’ appeared first on Alternative Press.

Link to the source article – https://www.altpress.com/features/poorstacy-party-at-the-cemetery-interview/

Bring Me The Horizon have announced their next European tour. The run follows their widely successful U.K. Post Human tour. Scheduled to take place throughout…

A properly corrosive treat. POORSTACY is continuing his descent into darker and more delirious sounds, and their latest track brings those explorations to a head.…

Bring Me The Horizon frontman Oli Sykes returns with another guest contribution for a single off Poorstacy‘s recently released record “Party At The Cemetery“. The…

From the Aubreys, Spiritbox and DED to Bishop Briggs, Sueco The Child and Tom Morello, issue #399 is jam-packed with musicians who are leading the…

POORSTACY shouts out the misunderstood in his new track, “Children Of The Dark.” Along with the song comes a new video, shot and edited by…