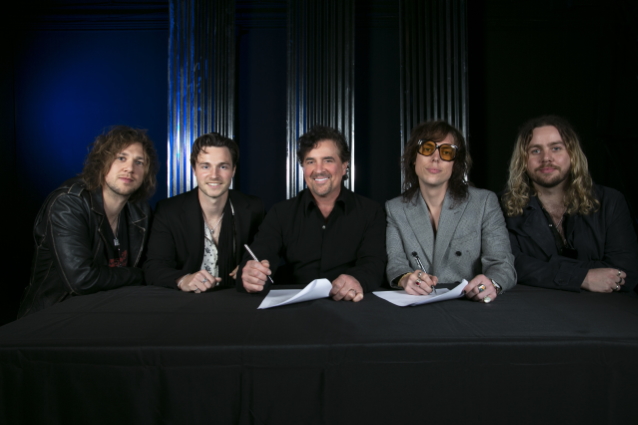 Formed in Derby, England circa 2012 with a recent creative surge in Los Angeles, the tongue-in-cheek swagger of singer Luke Spiller, guitarist Adam Slack, bassist Jed Elliott, and drummer Gethin Davies is influenced by a mix of QUEEN flair and OASIS audacity.

THE STRUTS‘ name was born from a rehearsal observation as Spiller innately strut around the room as they performed in their earliest days. Since, they have found themselves massively embraced by some of the greatest icons in rock and roll history, opening for FOO FIGHTERS, THE ROLLING STONES, THE WHO, GUNS N’ ROSES and MÖTLEY CRÜE. NPR Music has observed THE STRUTS “reveal the supreme mix of massive riffs and powerfully catchy melodies that’s already slain so many adoring audiences around the globe” while The Aquarian believes they “have helped breathe new life into rock and roll, while simultaneously making a sound all their own.”

Spiller comments: “Myself and the rest of THE STRUTS are so happy and excited to announce we have become part of the Big Machine family! We are more inspired and focused than ever, and that mainly comes down to Scott and the rest of the team’s genuine love and excitement for what we do. Watch this space because it’s about to blow up.”

Adds Big Machine Label Group chairman and CEO Scott Borchetta: “I’ve always loved this band’s sound and swagger and Luke is one of the best frontmen in rock. They’ve always had the passion, put in the time and the long miles, and now it’s time to go next level. Welcome to the Machine.”

THE STRUTS have toured incessantly since their formation, including worldwide headline shows and major festivals like Lollapalooza, Governors Ball and Isle Of Wight, until COVID-19 brought road life to a halt. Yet a charmed and frenzied burst during the transition resulted in their third album outpouring of modern rock. Within less than two weeks, THE STRUTS laid down ten tracks — including collaborations Robbie Williams, Tom Morello and more — for “Strange Days”. They have also previously recorded with Kesha, Albert Hammond Jr. of THE STROKES, Joe Elliott and Phil Collen of DEF LEPPARD and Paris Jackson. Aiming to claim their rightful place in the lineage of hellraisers, THE STRUTS will tour in the U.S. this spring before heading to Europe for a summer festival circuit, where fans eagerly await the British rock band’s return.

Link to the source article – https://www.blabbermouth.net/news/the-struts-sign-new-record-deal/

The Struts have returned with a new single called ‘Fallin’ With Me’ – check it out below. The new track is the Derby band’s first…

Having to choose one song to represent the greatness of rock ‘n’ roll seems nearly impossible because there are just way too many out there.…

When you know, you know! And The Struts knew they had something special with the new song “Fallin’ With Me,” so this fresh new earworm…