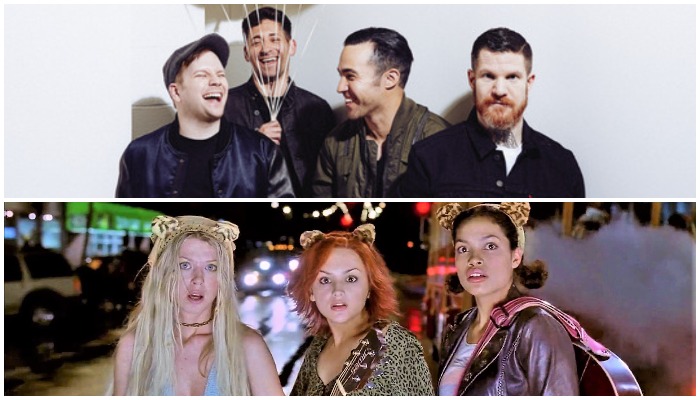 Fall Out Boy bassist Pete Wentz is officially taking over the radio waves at Apple Music. On April 12, he launched his weekly show Loud And Sad Radio. During every episode, Wentz will be talking about an array of topics in music, social media, TV and film.

During the inaugural episode, Wentz played a slew of classics from artists such as Paramore, the Weeknd, Arctic Monkeys and Linkin Park. As well, he used his new Loud And Sad Radio platform to talk about how Josie And The Pussycats ended up influencing one of Fall Out Boy’s most iconic songs, “Thnks Fr Th Mmrs.”

Read more: 10 lead singles from the 2000s that define these iconic album eras

During Loud And Sad Radio, fans can expect Wentz to go in-depth about his current interests and even reveal some big Fall Out Boy secrets. During his first episode this week, the bassist confessed that the 2001 film Josie And The Pussycats ended up having a big impact on both Patrick Stump and him. In fact, Wentz and Stump were so enthralled by the film’s music that they sought out the person who helped create it.

“After From Under The Cork Tree, we went and saw the movie Josie And The Pussycats,” Wentz says on Loud And Sad Radio. “Me and Patrick were at it, and I was like, ‘Whoa, who wrote the music for this? Because it sounds like punk music written by somebody who’s never heard punk music before. We need them to produce the next album.’ And it was Babyface.”

Outside of his own music, Babyface has worked with a slew of notable artists including Whitney Houston, Pink, Mariah Carey and Ariana Grande among others. After Fall Out Boy connected with him, Babyface ended up producing “Thnks Fr Th Mmrs,” off of 2007’s Infinity On High.

Alongside Babyface, the late Adam Schlesinger (Fountains Of Wayne) produced and wrote some of the songs on the Josie And The Pussycats soundtrack. As well, Letters To Cleo vocalist Kay Hanley provided the singing voice for Josie (Rachael Leigh Cook) on tracks such as “3 Small Words,” “Pretend To Be Nice” and “Spin Around.” Meanwhile, the film’s stars Cook, Rosario Dawson and Tara Reid recorded backing vocals.

The trailer for Josie And The Pussycats is available to watch below.

During the debut Loud And Sad Radio episode, Wentz also opened up again about working with Kim Kardashian on the “Thnks Fr Th Mmrs” video. In the classic visual, Wentz is upstaged by his music video director who is also a monkey. Kardashian happens to be just one of the many girls the monkey manages to impress. Ultimately, her appearance in the video marks one of the most iconic video cameos from throughout Fall Out Boy’s career.

“I remember we had Kim Kardashian in the video for this song,” Wentz says on his radio show. “It’s just so interesting when you look back on that moment and you’re like, ‘This is the last moment Fall Out Boy interacted in public with Kim Kardashian where we had the same amount of fame as her. It’s funny when you look back at this stuff. Thanks for the memories, Kim.”

Loud And Sad Radio airs every Monday on Apple Music Hits. For Wentz, this new radio show will allow him to further connect with fans and talk about some of the things he loves most.

“You really got to think about this [Loud And Sad] as moments meeting from divergent courses, somewhere in the realm of the TV show Curb Your Enthusiasm meets the movie Drive,” he says. “And this is what Loud and Sad Radio is. It doesn’t have to be loud and it doesn’t have to be sad, but there are some things that just have that vibe.”

The first episode of Loud And Sad Radio where Wentz also talks about Batman, the Beatles and Aerosmith is available to stream here on Apple Music.

Listen as he showcases his one-of-a-kind personality with an eclectic soundtrack that spans everything from classic and punk rock to movie soundtrack hits: https://t.co/I7rktMGKeK pic.twitter.com/oZWZv9O93j

More on Fall Out Boy

Fall Out Boy are hitting the road this summer with Weezer and Green Day for the Hella Mega Tour. Last year, the tour was postponed in Asia, Europe and the U.K., North America and, eventually, New Zealand and Australia amid the COVID-19 crisis. Following the first postponements, Wentz assured fans they would see the tour one way or another.

Finally, last summer, the rescheduled dates for the Hella Mega Tour legs in Europe and the U.K. and North America were announced. The Interrupters are still slated to support on the North American leg.

Now, the tour is set to kick off on June 9 in Vienna, Austria. Despite the uncertainty in the live music industry, Weezer frontman Rivers Cuomo said in January 2021 that the band are still preparing for the tour this summer.

“My manager just told me yesterday that the U.S. promoter is still saying it’s gonna happen,” Cuomo told NME. “That could change, but I’m not making any other plans for the summer.”

The full list of the Hella Mega Tour dates is below, and more information on the tour can be found here.

What are your reactions to Josie And The Pussycats influencing Fall Out Boy’s “Thnks Fr Th Mmrs”? Let us know in the comments below.

The post This classic Fall Out Boy song was influenced by ‘Josie And The Pussycats’ appeared first on Alternative Press.

Link to the source article – https://www.altpress.com/news/josie-and-the-pussycats-influenced-fall-out-boy-song/

A lot of really incredible information here. Marvel’s latest offering Shang-Chi and the Legend of the Ten Rings is currently doing the rounds and turning lead…

Fall Out Boy said hello to the Hella Mega Tour again on Tuesday night (Aug. 10) after the group missed three dates due to an…

Patrick Stump has announced his latest foray into the world of film scoring, with the Fall Out Boy frontman having composed the music for an…

A YouTuber has reworked Fall Out Boy‘s ‘Sugar, We’re Goin Down’ into a country song – listen to it below. READ MORE: Green Day vs…