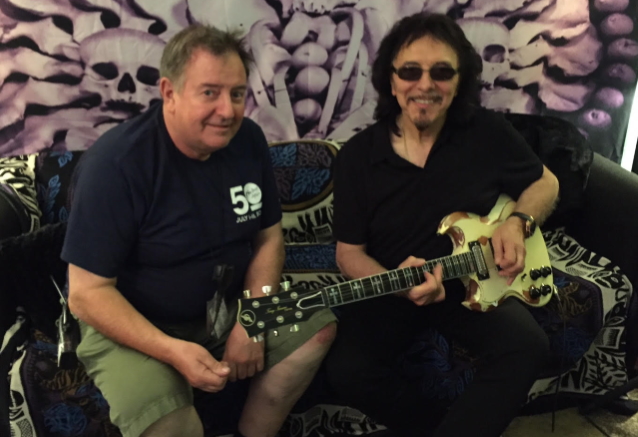 Tony Iommi‘s longtime guitar tech Mike Clement is in “an induced coma” after taking a “serious tumble while working at his business.”

Clement has worked with the legendary BLACK SABBATH guitarist tech for more than three decades. Before hooking up with Iommi, Clement was MOTÖRHEAD‘s tech for three and a half years.

Earlier today (Tuesday, April 19), Iommi shared a photo of him with Clement on social media and he included the following message: “Ongoing sad news about my tech and good friend Mick Clement who took a serious tumble while working at his business. He’s been in an induced coma and is thankfully starting to show signs of progress. Our thoughts are with his family, he has been a keyman with me for over 30 yrs.”

According to Home Of Metal, Clement “fell” into the rock and roll industry in the mid-’70s while still at college in Manchester. Mike became a lighting designer working with a diverse range of artists in the late ’70s, including Roy Harper, UK SUBS and WAH HEAT. After a drunken encounter with an old friend, Ian Wilson from Sad Café, at local watering hole Mulberries, he was persuaded to take a new career direction looking after backline, taking up the challenge he spent the next four years working with MOTÖRHEAD, looking after Lemmy and Michael “Würzel” Burston. In early 1990, he got a call to be guitar tech for SABBATH and has been there ever since.

In February 2017, SABBATH finished “The End” tour in Birmingham, closing out the quartet’s groundbreaking 49-year career.

“The End” was SABBATH‘s last tour because Iommi — who was diagnosed with lymphoma in late 2011 — can no longer travel for extended amounts of time.

Iommi revealed his cancer diagnosis in early 2012, shortly after SABBATH announced a reunion tour and album. He underwent treatment throughout the recording of the disc, titled “13”, and the subsequent tour to promote it.

Ongoing sad news about my tech and good friend Mick Clement who took a serious tumble while working at his business. He’s been in an induced coma and is thankfully starting to show signs of progress. Our thoughts are with his family, he has been a keyman with me for over 30 yrs. pic.twitter.com/hBIQcJoWgn

Link to the source article – https://www.blabbermouth.net/news/tony-iommis-longtime-guitar-tech-is-in-an-induced-coma/

In a new interview with Neil Jones of U.K.’s Planet Rock, BLACK SABBATH guitarist Tony Iommi was asked if there is a chance of some…