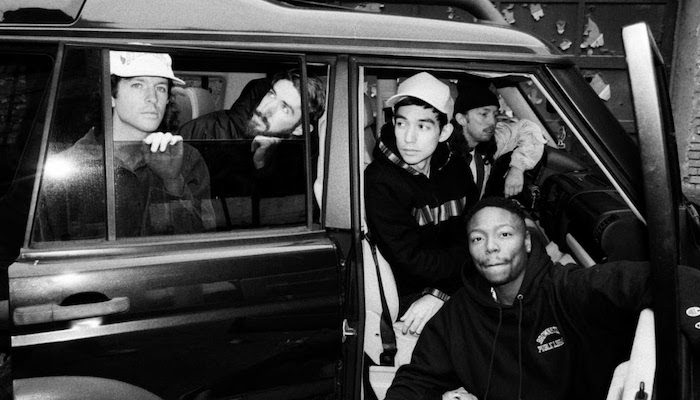 Keeping up with a summer of releasing powerhouse singles ahead of their album GLOW ON, Turnstile have released their latest new single, “BLACKOUT.”

The new song comes alongside a visual featuring animation from French designer Alexis Jamet. Cinematographer Logan Triplett, who has worked with alternative artists such as Olivia Rodrigo and Moses Sumney, also helped with animation.

Turnstile have two incredibly unique skills. The first is their ability to make listeners feel weightless, whether that means soaring toward a stage while crowd-surfing or letting their more shoegaze tracks take you away. Their other skill is consistently transcending genres while remaining true to the in-your-face beatdown sound that made them an iconic hardcore act. “BLACKOUT” manages to do both simultaneously.

The visual begins with a simple white dot trailing across a gray background. A crunchy guitar riff builds anticipation until the full band join in while the dot materializes into various band members. As white silhouettes continue transforming into various beings, Daniel Fang’s cowbell-heavy drums set a machine-gun pace. Brendan Yates’ characteristic sing-scream vocals are truly on display here, as are bassist Franz Lyons’ aggressively distorted riffs. The heavy-hitting song peaks at 2:18, when an explosive breakdown slows the otherwise machine-gun-paced song into a teeth-gritting two-step.

Every Turnstile release in 2021 so far has been accompanied by an artistically creative music video directed by lead singer Yates. A short film accompanied their recent EP, TURNSTILE LOVE CONNECTION, which appeared in select L.A. and Baltimore movie theaters prior to its release. The latest single also features Yates’ direction.

“BLACKOUT” is just the latest song to come off GLOW ON, scheduled to drop Aug. 27. In addition to the new release, their single “ALIEN LOVE CALL” (feat. Blood Orange) and the entire TURNSTILE LOVE CONNECTION EP will also be on the album. You can preorder the record here and find the tracklist below.

In a press release, Yates said creating the album was “a learning experience.”

“Working to figure out what you want from a song and how to capture it is always a huge learning experience,” Yates says. “A live show environment shared with others, I think, is the true essence of the band and music, but when recording an album, you’re given a lot of opportunity. You want to breathe as much imagination into it as possible.”

As if releasing one of the most anticipated albums of 2021 wasn’t enough, Turnstile are also scheduled to go on tour in August. While the release of “ALIEN LOVE CALL” showcased the band’s ability to create stripped-down anthems as well as collaborate with other artists, “BLACKOUT” takes them back to their hardcore roots. Both their hardcore expertise and ability to collaborate will be on display in fall 2021 when they join the Grey Day tour to play alongside $Uicideboy$, Yung Gravy and Shakewell. Chicago drill rapper Chief Keef will also perform, so you certainly don’t want to miss out.

What do you think of Turnstile’s hard-hitting new single “BLACKOUT”? Watch the music video and drop a comment to let us know!

The post Turnstile drop “BLACKOUT” and visual ahead of forthcoming LP—listen appeared first on Alternative Press.

Link to the source article – https://www.altpress.com/news/turnstile-blackout-video-glow-on-release-date/

Turnstile have shared a new track called ‘Blackout’ – you can listen to it below. READ MORE: Walk on stage with Turnstile at their chaotic House…

Turnstile have released a mellow new single, “Alien Love Call,” featuring Blood Orange.  In addition to a new visual, the track comes with the announcement of…

At one point during Turnstile’s performance in Santa Cruz, California last week, one unlucky punter shat themselves in the mosh pit. READ MORE: Turnstile’s fun-filled…

Turnstile are continuing to pave their own path with the release of GLOW ON, their first full-length in three years. The digital cover stars of…