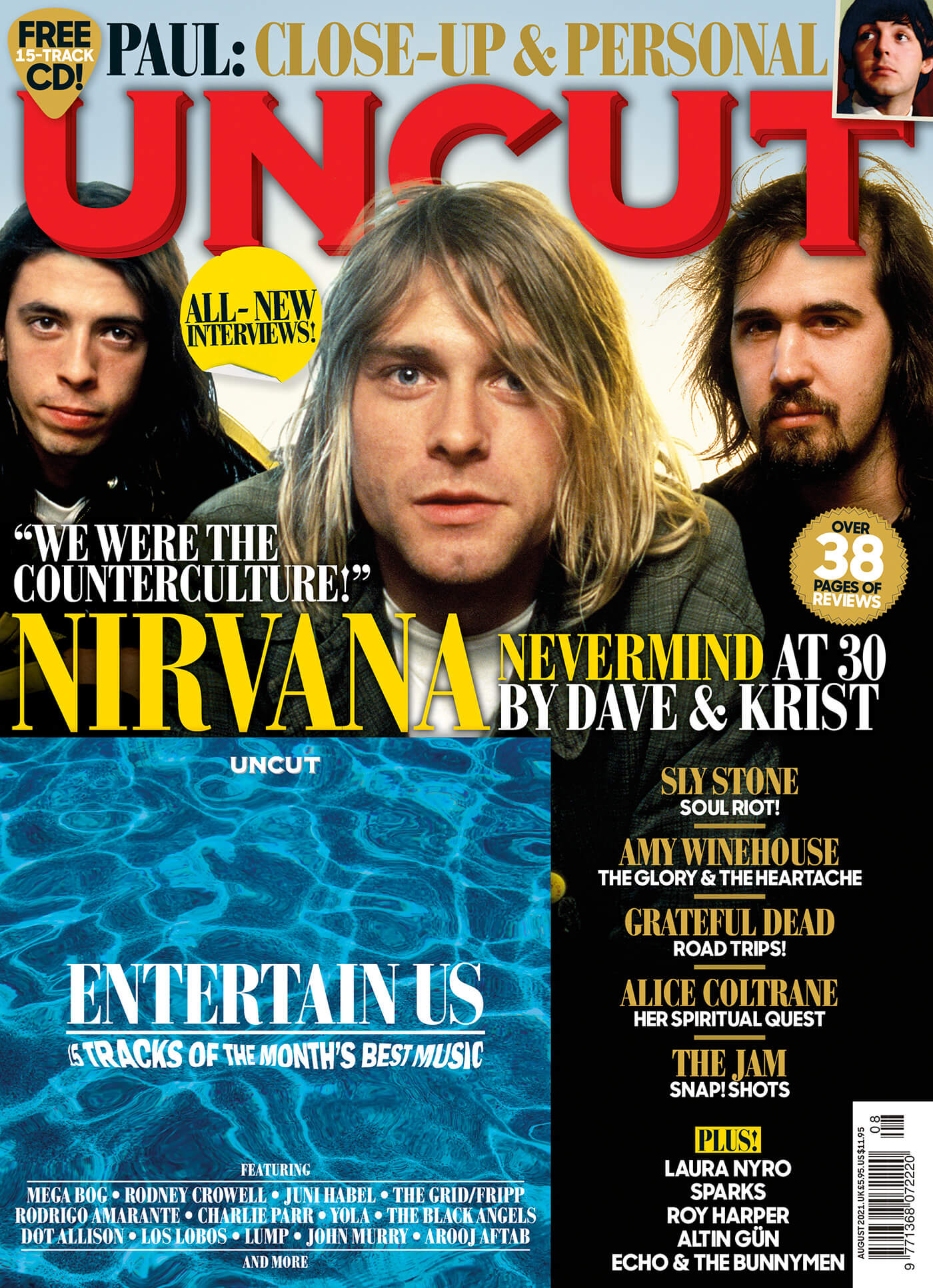 NIRVANA: Thirty years after Nevermind transformed Nirvana from adolescent punks to global superstars, Uncut revisits this era-defining classic in the company of its surviving creators. In brand new interviews, Dave Grohl and Krist Novoselic trace the album’s remarkable journey from a rented barn in Tacoma to the stage of Seattle’s Paramount Theatre and beyond, while producer Butch Vig reveals the secrets of the band’s working practices. There are cameos from Neil Young’s producer, aspiring cast members of Annie – The Musical and an ill-fated blue Datsun B210. And what of Kurt Cobain, you might ask? “He was vastly underrated as a comedian.”

This issue of Uncut is available to buy by clicking here – with FREE delivery to the UK and reduced delivery charges for the rest of the world.

Inside the issue, you’ll find:

PAUL MCCARTNEY: Photographer Harry Benson was nonplussed when he received a commission to cover The Beatles in 1964. All the same, travelling from London to Paris and New York during this breakthrough year, he struck up a rapport with the band – and McCartney in particular – that endured through several decades. With a new collection of his images due for publication, Benson shows us McCartney at work and at play – backstage, in hotel rooms and on private jets.

ALTIN GÜN: From their base in a former Cold War nuclear bunker, the psych warriors are busy reinventing the deep and mystical sounds of Anatolian rock. Their tools? Fuzz pedals, electronics, and ancient instruments once used in shamanic rituals. But their message, they tell Uncut, is universal: “Songs about love, hate, tragedy, death,  war… it’s all basic human emotions…”

SLY STONE: It is 1969 and the singer is on the brink of superstardom. Ensconced in his Bel Air mansion, he has begun work on a new album. But surrounded by dealers, groupies and gangsters, it takes over two years to finish the record – during which time the life-affirming utopianism of his music is replaced by darkness, drugs and isolation. Fifty years on, band members recall the turbulent making of a masterpiece: There’s A Riot Goin’ On. “Fame attracts wonderful people,” hears Michaelangelo Matos. “But fame also attracts guns and dogs.”

SPARKS: Fifty years after releasing their first album as Halfnelson, Sparks are finally ready for their close-up. A new documentary, The Sparks Brothers, directed by Edgar Wright, pays tribute to the indomitable, pioneering spirit of music’s oddest couple. “People expect us to try to alienate them from time to time…”

RODNEY CROWELL: The Americana star on wild times with Guy and Townes, the generosity of Johnny Cash and the sex life of the Tennessee cicadas.

AMY WINEHOUSE: The making of “Back To Black”.

ANGELIQUE KIDJO: Album by album with the Afro-fusion artist.

In our expansive reviews section, we take a look at new records from Lump, John Murry, The Flatlanders, Kings Of Convenience, Sleater-Kinney, Yola, John Frances Flynn, and more, and archival releases from Alice Coltrane, Laura Nyro, PJ Harvey, The Shins, Michael Small, Chris Barber, Aretha Franklin and others. We catch Songlines Encounters Festival and Gruff Rhys live; among the films, DVDs and TV programmes reviewed are Martin Eden, Punk the Capital: Building A Sound Movement and Rockumentary: Evolution Of Indian Rock; while in books there’s Sinéad O’Connor and Nico.

Our front section, meanwhile, features The Jam, Will Sergeant, Ellen Folley, Roy Harper and Arooj Aftab while, at the end of the magazine, Jakob Dylan reveals the records that have soundtracked his life.

You can pick up a copy of Uncut in the usual places, where open. But otherwise, readers all over the world can order a copy from here.

These days – inevitably, perhaps – many of our perceptions about Nirvana are filtered through the death of Kurt Cobain. An industry has gathered around…

It is 1969 and Sly Stone is on the brink of superstardom. Ensconced in his Bel Air mansion, he has begun work on a new…

As part of the cover story in the August 2021 issue of Uncut and in celebration of Nevermind’s impending 30th anniversary, we revisit the era-defining classic…

There’s a rumbling deep beneath Vondelpark – more precisely, emanating from the Vondelbunker, a Cold War nuclear shelter under a bridge in one of Amsterdam’s…