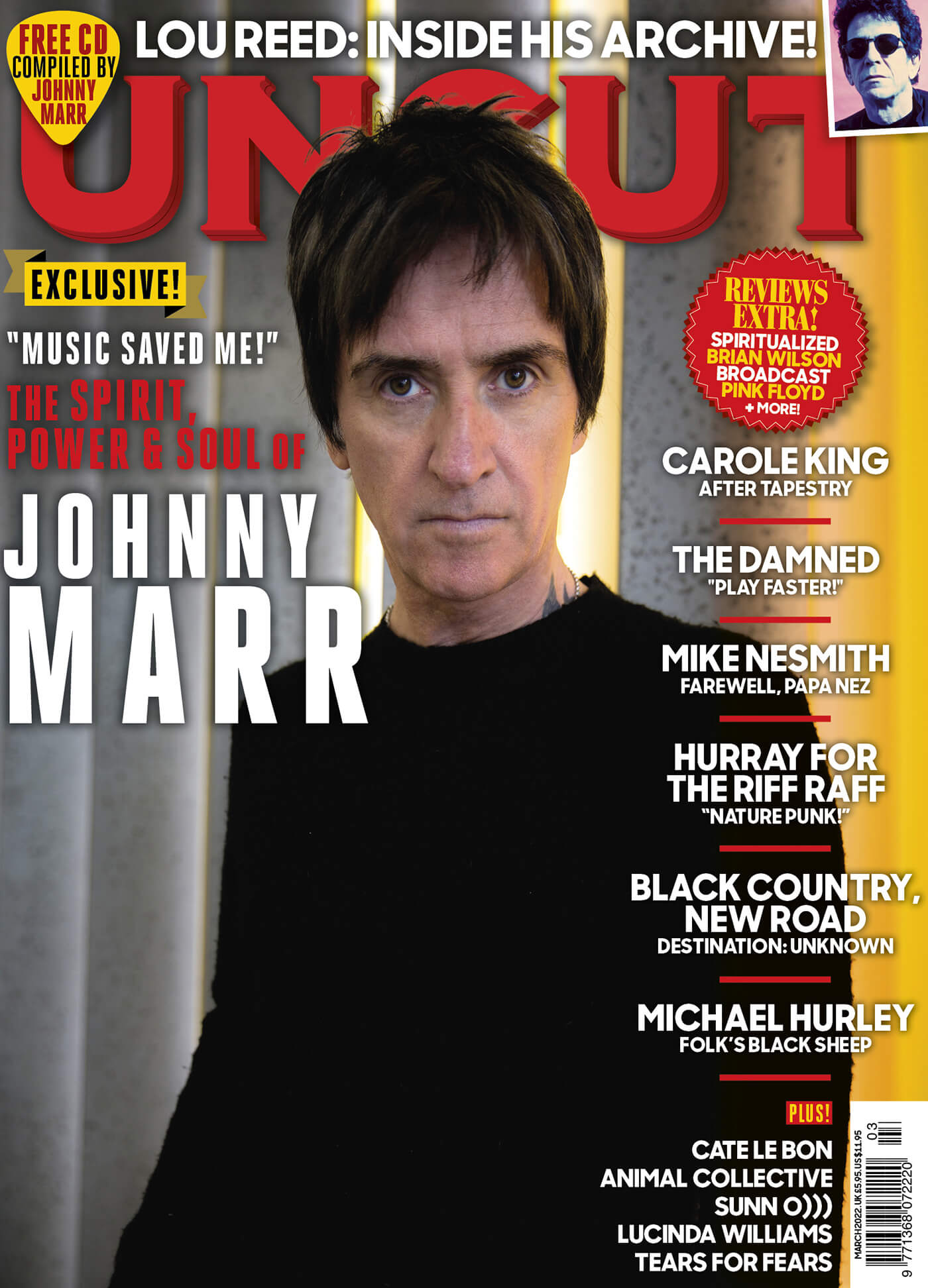 HAVE A COPY SENT STRAIGHT TO YOUR HOME

JOHNNY MARR: Nearly four decades on from The Smiths’ debut single, Johnny Marr has made the most ambitious album of his career. After the seismic events of recent times, Fever Dreams Pts 1–4 mines qualities of optimism, empathy and collectiveness. But what do Syd Barrett, Sylvia Plath and Marr’s 11-year-old self have to do with it? Michael Bonner heads to Marr’s HQ outside Manchester to discover: “It’s all a work in progress. Everything is connected.”

This issue of Uncut is available to buy by clicking here – with FREE delivery to the UK and reduced delivery charges for the rest of the world.

Inside the issue, you’ll find:

CAROLE KING: Tapestry made Carole King a global superstar and broke records around the world – but how do you top an album that defined a generation? Graeme Thomson charts King’s path through the rest of her creatively fecund ’70s, with help from her most trusted lieutenants. “Carole broke several glass ceilings with Tapestry – but she just kept going.”

LOU REED: In March, a new exhibition opens to mark Lou Reed’s 80th birthday. But what can we expect from a man who rarely wanted to discuss his past? Nick Hasted digs through the boxes of bar tabs, bootleg albums and… swords! And what does this trove tell us about future plans for unreleased music? “There are many plans to continue putting out Lou’s work,” reveals Laurie Anderson.

HURRAY FOR THE RIFF RAFF: Locked down in New Orleans during the pandemic, Hurray For The Riff Raff’s restless creative spirit Alynda Segarra sought solace in the natural world. But while sampling plants, a Singing Tree and psychedelic exploration have helped her make sense of her own experiences, she believes her greatest adventures are yet to come. “I’m like the Fool in the tarot card deck, going out on my journey with my bindlestiff,” she tells Jaan Uhelszki.

CATE LE BON: Cate Le Bon has been busy chasing inspiration across continents – from a house owned by Gruff Rhys in Cardiff to Neil Young’s former retreat in Topanga Canyon. Her quest has led – metaphorically at least – to ancient Rome for her ambitious new album, Pompeii. But has the enigmatic art-rock outsider finally learned to be herself? “I’ve always flown totally under the radar,” she tells Tom Pinnock.

MICHAEL HURLEY: Join us at the blackberry bushes, where Michael Hurley can be found cutting back the foliage deep in the Oregon wilderness. As the veteran folk singer prepares to release a new album, The Time Of The Foxgloves, he leads Stephen Deusner through his wild and idiosyncratic career – from Greenwich Village in the ’60s onwards. Stand by for many marvellous digressions, sundry gardening tips and a glimpse into “Snocko Time”. Oh, and Bob Dylan? “That’s a bad question.”

THE DAMNED: The making of “Neat Neat Neat”.

Our front section, meanwhile, features Animal Collective, Sharon Robinson, Lucinda Williams, Swell Maps and Caroline, while, at the end of the magazine, Curt Smith reveals the records that have soundtracked his life.

You can pick up a copy of Uncut in the usual places, where open. But otherwise, readers all over the world can order a copy from here.

Link to the source article – https://www.uncut.co.uk/publications/magazines/uncut-march-2022-136346/?utm_source=rss&utm_medium=rss&utm_campaign=uncut-march-2022

Johnny Marr has compiled a free, 12-track CD that is only available with the new issue of Uncut – which is on sale January 13…

Welcome to the first Uncut of 2022. For anyone keeping track of these things, this is an auspicious year for us: our 300th issue is…

Hurray For The Riff Raff (aka Alynda Segarra) have released a new track, “PIERCED ARROWS”. The track is taken from Segarra’s forthcoming album, LIFE ON…

Johnny Marr – known by many for his work with The Smiths – has teased new double album, Fever Dreams Pts 1-4, by announcing the…

It’s a good day to be a fan of the non-terrible members of The Smiths. Johnny Marr just revealed the official release date for the…

Online 0
There are no users currently online
Uncut – March 2022