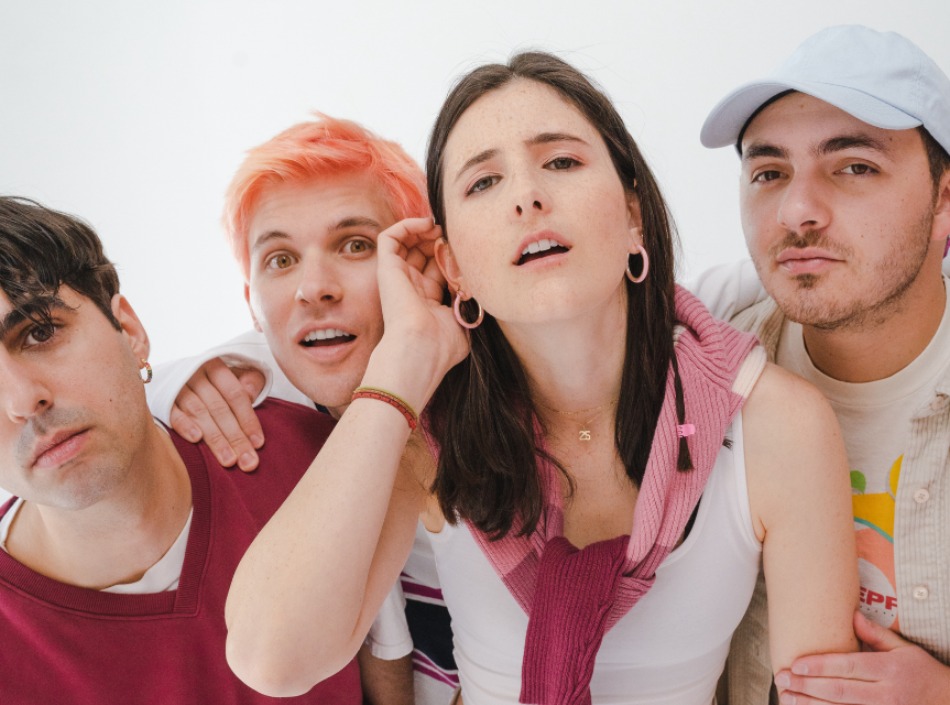 Canadian Indie-pop quartet Valley have released a new single and video for “SOCIETY.” The acoustic track is a defiant statement rejecting the demands put upon musicians by the recording industry.

Valley have come a long way since their 2016 EP, This Room Is White. Since then, the band put out their debut full-length in 2019, Maybe, and in 2020 were nominated for the Juno award for Breakthrough Artist of the Year. Their single “Like 1999,” which was only released in April 2021, also went viral on the strength of a TikTok teaser. Rising as quickly as they did, it’s no wonder the group is starting to feel the pressure of success.

“SOCIETY” begins with the lyrics “Wait/Might need a break/To Overtake/This cycle of another song, a different day.” The words capture the experience of pop-star burnout. The chorus adds an upbeat yet provocative lament, continuing to say,  “Society sucks/I think I messed up/I think I sold out when the sales went up.”

The band announced the new song via social media. As they’ve done in prior releases, the group also included transcribed lyrics so listeners could understand the words from their first listen.

Valley will be supporting COIN on the Rainbow Dreamland tour this coming fall. In addition to the tour, the group is also scheduled to play Wonderbus Music and Arts Festival in Columbus and BottleRock Festival, a sold-out, multi-day food and wine event held in California’s Napa Valley. You can find ticket links for their upcoming tour on the band’s website and concert dates below.

Also, see below for our interview with band drummer Karah James to hear more about the new track and the group’s plans for the upcoming tour.

Can you talk about the inspiration for your new song “SOCIETY”?

We were in a co-write in L.A. in late 2019 and brought a pretty heavy and personal concept to the writer. They immediately shut the idea down because [they] felt it was too heavy for a pop song and would be less accessible to the masses. During the session, Karah started writing a whole other song on her phone, and the next day we all went to the studio with our dear friend Andy Seltzer and finished writing said song. We wrote about the internal balancing act that many artists experience when owning a narrative. Do you “dumb it down” (for lack of better terms) so that more people can relate and experience escapism, or do you unapologetically speak your truth with the hope that some people also may relate to your hardships?

What were you trying to capture with the track?

Our intent was to capture the difficult emotions that we felt while trying to please everyone and inevitably not pleasing ourselves. We realized that it can become a lose-lose situation if at the end of the day we are not following our own compass. Although this was not a permanent feeling, we do struggle with it sometimes when more and more people start to care about what [we’re] doing. The lyric “I think I sold out on the day I signed up for society” alludes to the fact that we put ourselves in this position of internal conflict.  Only we can figure out the way to navigate through it while maintaining the balance of ‘my head or my heart, the cash or the art’.

Could you describe the video for the track?

The video was so much fun to make as Alex got to play the role of the “Big Wig” label executive. The video follows the band on their hypothetical journey to a sterile and meaningless version of  “success”; pushing them so hard that they become servants to the media, the money and all of the parts of society that are vain and empty. At the end of the video, we let go of all of our qualms and dance it out. For the record though, our label has been nothing but supportive in all of our decisions. Speaking generally, society as a whole has a way of putting that pressure on people especially in the creative world.

What were you going for and what was it like working on the project?

We were not going for anything specific, just doing what felt right for the song and the narrative. We like juxtaposing a sad lyric with an upbeat instrumental and referenced songs like “All Star” [by] Smashmouth and “You Get What you Give”  [by] New Radicals. Working on the song and music video was so fun because there are so many lyrics to work off of that I think a listener will find themselves gravitating to even if they are not in the creative industries.

How has the pandemic affected your approach to writing and recording music?

It’s been tough as our ”normal” is such a thing of the past. You get used to writing about traveling and meeting new people and being at uncomfortable parties—all of those spontaneous things that happen when there isn’t a pandemic. Learning how to write without all of those easily accessible nuggets of inspiration is a challenge. We’ve had to think much more introspectively and even write about experiences that happened before this pandemic.

Can you tell us about your upcoming tour with COIN and what fans can expect from the run?

We’re so incredibly excited to get back on the road and play shows and meet a whole bunch of new fans! We’ll be playing as many songs as we can fit into our set off of the [sucks to see you doing better] EP and definitely some new songs!

What songs are you most looking forward to playing live?

“SOCIETY” will be a fun one, because it’s so energetic and maybe we’ll whip out some [choreography] on stage. We’ve also never toured our sucks to see you doing better EP so we are definitely anxious to play that and see how people respond to our new and improved live show!

What do you think of Valley’s new single “SOCIETY?” Let us know in the comments below!

Link to the source article – https://www.altpress.com/news/valley-society-coin-tour-rainbow-dreamland/

BLACK VEIL BRIDES have released a teaser for the music video for their new song “Fields Of Bone”. The track is taken from the band’s…

GUNS N’ ROSES and FOO FIGHTERS are among the headliners of this year’s BottleRock Napa Valley festival. Over 80 musical acts, including Stevie Nicks, Miley…

BLACK VEIL BRIDES have released the official music video for their new song “Fields Of Bone”. The track is taken from the band’s upcoming album,…

BLACK VEIL BRIDES have released behind-the-scenes footage for the making of the official music video for their new song “Fields Of Bone”. The track is…

BLACK VEIL BRIDES have pushed back the projected release date of their new album, “The Phantom Tomorrow”, to October 29 from the previously announced June…