The first episode of “Psycho Schizo Espresso”, a brand new podcast from IRON MAIDEN‘s Bruce Dickinson and Oxford University psychologist and best-selling author Dr. Kevin Dutton, officially launched across all podcast platforms on Sunday, October 31. New episodes will be made available every other Tuesday.

Episode One features New Testament scholar Professor Steven J. Friesen from the University of Texas, author of “Imperial Cults And The Apocalypse Of John – Reading Revelation In The Ruins”, and expert on the Book Of Revelation. That episode will be the first of a two-parter exploring the devil’s role in heavy metal and decoding one of the Bible’s most impenetrable secrets — the hidden meaning behind 666, “The Number Of The Beast” — a number that’s certainly featured prominently in Bruce‘s career.

In a preview clip, Bruce talked about why bands like IRON MAIDEN and BLACK SABBATH have explored Satanic imagery in their songs and seemingly reveled in the controversy that they generated. “‘Cause it’s really dramatic,” he said. “And at a certain point in time, certainly for people of a certain age, like me, from what you might call a society which was — ’cause I’m 62, so going back to, like, the late ’50s, Europe was broadly Christian; a lot more people went to church back then than do now. Probably four or five times, or even more, people would just turn up at church; they weren’t deserted, as they are now. And they would generally believe in things like absolute evil and there being an absolute good, but nobody knew anybody who was absolutely good. But for sure, absolute evil existed somewhere, ’cause otherwise how could anybody be absolutely good. So you had to have something to measure yourself against.

“What heavy metal bands did by adopting imagery was they shocked people,” he explained. “Because in the same way that the early Hammer movies reintroduced Dracula but with sex. So they actually had Dracula, blood, fangs, sex, the devil — all this stuff was, like, ‘Oh my God. That is so shocking,’ but it really kind of turns us on in secret. And, of course, as kids, you’d be forbidden to watch it, and, of course, it would be interesting, and you’d watch it. And then you’d just use your imagination to create stories. And then a whole raft of films came out — ‘The Omen’ and ‘The Exorcist’ and things like that — that all had this idea of an actual physical force of evil. And it was quite exciting, really — not because you wanted to be it, but to know that you could imagine your way into the drama and put that into music and dramatize it.”

You can listen to “Psycho Schizo Espresso” wherever you get your podcasts, and the show is also available in Vodcast form on YouTube.

Head to this location to find the podcast on your favorite platform.

Official podcast description: “If psychology was a country, then it would be the world’s top tourist destination bar none. It’s an enchanted territory with something for everyone: from aliens to drug lords, from serial killers to conspiracy theories. Join intellectual explorers Bruce Dickinson and Dr. Kevin Dutton for an Indiana Jones style adventure through some of its most far-flung corners as they delve into the psyches of rock icons, sporting superstars, and special forces soldiers and get the latest tips and insights from some of the most respected thought leaders and brain scientists on the planet. If you’ve ever wondered whether psychopaths like Hannibal Lecter and Patrick Bateman really exist outside the imaginations of Hollywood screenwriters and film directors, why ghosts only seem to appear at night, and about the true meaning of the Book of Revelation’s most enduring and enigmatic mystery — 666, the number of the beast — then welcome aboard Flight Psycho Schizo Espresso and observe the ‘fasten seatbelt’ sign!”

Dutton explained how the idea for the podcast came about: “Not long after meeting Bruce, it became instantly clear to me that we shared a number of wide-reaching interests and that we should channel that into a podcast. ‘Psycho Schizo Espresso’ is certainly a journey of exploration for the both of us, and we are sure our listeners are going to learn a lot from our guests. Whether from the music industry, academia or elsewhere — you may, for instance, share our interest in psychopaths, both good and bad — this is certainly a podcast that we feel everyone will enjoy and should go and subscribe to straight away.” 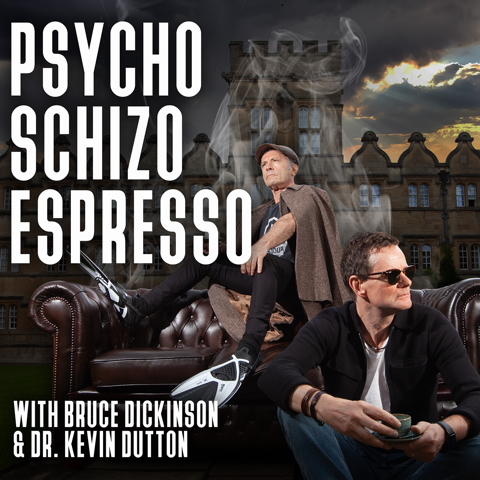 Link to the source article – https://www.blabbermouth.net/news/listen-to-first-episode-of-iron-maiden-singer-bruce-dickinsons-psycho-schizo-espresso-podcast/

The first episode of the second season of “Psycho Schizo Espresso”, a video podcast from IRON MAIDEN‘s Bruce Dickinson and Oxford University psychologist and best-selling…