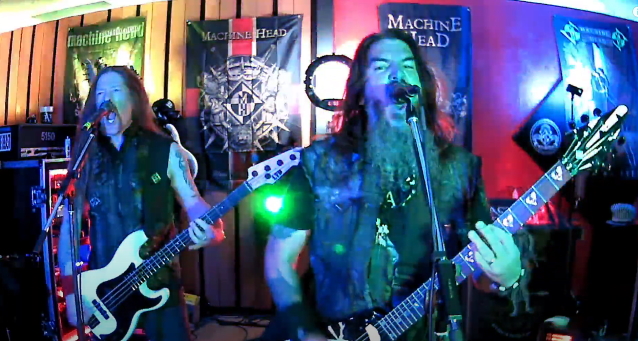 MACHINE HEAD‘s Robb Flynn and Jared MacEachern held the latest “Electric Happy Hour” on Friday, April 15 during which they played the band’s new single, “Choke On The Ashes Of Your Hate”, live for the first time. You can now watch video of the performance below.

“Choke On The Ashes Of Your Hate” will appear on MACHINE HEAD‘s tenth studio album, “Of Kingdom And Crown”, which will arrive on August 26 via Nuclear Blast/Imperium Recordings. The follow-up to 2018’s “Catharsis” includes the three songs that were featured on last year’s “Arrows In Words From The Sky” single: “Become The Firestorm”, “Rotten” and “Arrows In Words From The Sky”. Much of the new MACHINE HEAD album was recorded at Sharkbite Studios in Oakland, California with producer Zack Ohren.

“Of Kingdom And Crown” is a 13-track concept album set in a decimated futuristic wasteland where the sky is stained crimson red. The crux of the story is based on two main characters: the first and main character is Ares (pronounced Aries), who loses the love of his life (Amethyst) and goes on a murderous rampage against the vile sect responsible for her murder; the second character is the perpetrator Eros (pronounced Arrows), who loses his mother to a drug overdose and becomes radicalized in the aftermath. Eros goes off the deep end manifesting his own killing spree. The lyrics detail how their lives intertwine.

Flynn commented: “Thanks to my two teenage boys, my family has become obsessed with this awesome Japanese anime series called ‘Attack On Titan’. The album’s concept was loosely inspired by the series in the sense that in the storyline there is no ‘good’ or ‘bad’ guy; both characters believe they’re doing the right thing as it applies to their being, but make no mistake, both are committing acts of pure atrocity and evil. The opening track ‘Slaughter The Martyr’ is basically our character No. 1’s origin story.”

The colossal concept comes with a list of equally colossal packaging for various physical formats including 16 different worldwide vinyl formats, deluxe vinyl box set (with bonus tracks), CDs (both old-school longbox and jewel box options), multi-color cassettes, and a limited-edition digipak with bonus tracks. CDs, digipak, cassettes, and all digital formats will be available on August 26, with all vinyl formats arriving on November 25.

Flynn recently told Metal Hammer magazine about the musical direction of the new MACHINE HEAD material: “It’s similar to [2003’s ‘Through The Ashes Of Empires’ and 2007’s ‘The Blackening’] in that we’re moving forward into something fresh and new but it’s got that classic MACHINE HEAD vibe. We have a lot to deliver and expectations are very high, so I’m lucky to have great people surrounding me. Jared really stepped up and wrote some great riffs and great vocals. Vogg [guitarist Wacław Kiełtyka] contributed a few ideas and brought some really great songs.”

He continued: “It’s fucking heavy, probably the heaviest we’ve been in a few albums. I’ve been playing so much guitar recently; I do Electric Happy Hours every Friday and sometimes you play a song you haven’t played in 10, 20 years, or go through a whole album from top to bottom. When we toured ‘Burn My Eyes’, it took me back to where I was writing that music. I don’t think I can ever be in that place again lyrically, but riff-wise, I think that all spilled into this album.”

This past February, MacEachern told Primordial Radio about his contributions to MACHINE HEAD‘s new album: “I think that I was very aware from day one that Robb is the leader, he’s the creative leader, the musical leader… We all have our inputs but I think it’s always understood that ultimately the decision is up to him for how things go. But, yeah, I definitely made contributions and I feel great about those contributions and I’m asked about my opinion on certain things. But, like I said, I’m following his lead.”

As for the sound of the new MACHINE HEAD LP, Jared said: “It’s a pretty — to use Robb‘s word… I believe he used the word ‘colossal’ the other day. It’s a pretty big-, epic-sounding album. We’ve been toying around with the order, but I’ve been listening, sitting down, taking the time to listen to it all the way through, and the way it goes, it’s a ride — a really great, heavy, beautiful, melodic, raging, thrashing ride.”

MACHINE HEAD will team up with Sweden’s Viking metal overlords AMON AMARTH for a co-headline “Vikings And Lionhearts” European arena tour in September and October. 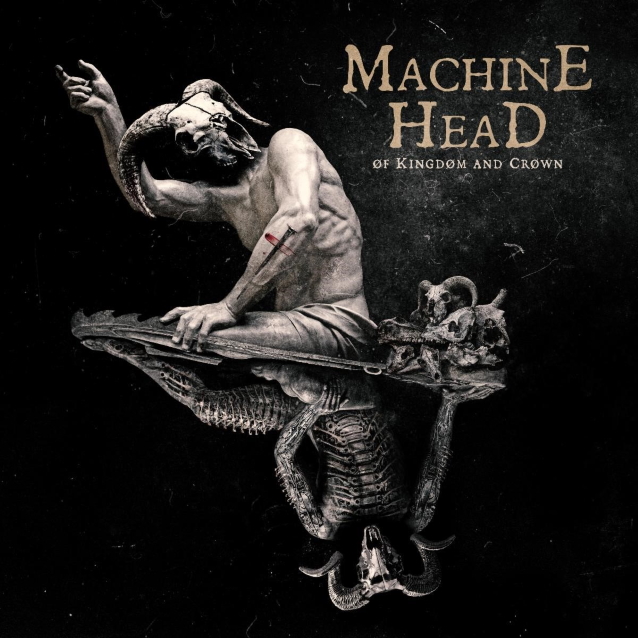 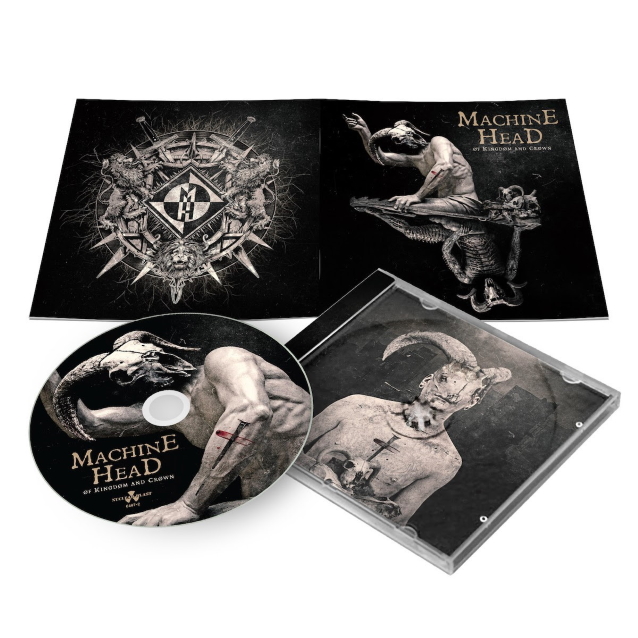 Link to the source article – https://www.blabbermouth.net/news/watch-machine-heads-robb-flynn-and-jared-maceachern-perform-choke-on-the-ashes-of-your-hate-live-for-first-time/

Machine Head have just announced Of Kingdom of Crown, a concept album which will feature the trio of songs that comprised last year’s Arrows in Words From…

Machine Head have shared details of their new album ‘ØF KINGDØM AND CRØWN’. The metal band’s 10th album is released on August 26 via Nuclear…