Former SKID ROW singer Sebastian Bach has returned to the stage for a tour celebrating the 30th anniversary of the band’s double-platinum, acclaimed album “Slave To The Grind”. The trek kicked off on September 25 in Waterloo, New York and will wrap in San Diego, California on December 17.

Fan-filmed video footage of Bach‘s October 23 performance at the Theatre Of The Living Arts in Philadelphia, Pennsylvania can be seen below.

Earlier this month, Sebastian was asked in a new interview with Rockin’ Metal Revival if he ever regrets writing such high vocal parts that he now has to reproduce live on stage three decades later. He responded: “All I can tell you is that I’ve been singing so much in the last four or months. I can’t tell you exactly what I was doing yet, but I will be able to. My voice is the same it’s always been.

“I’ve gotta say just a couple of things answering your question — a couple of things come to mind,” he continued. “For a guy like me or a guy like Bono [U2] or a guy like — I don’t know, Geddy Lee [RUSH] or somebody like that, making a record is not the same as doing a show; it’s not the same thing; it’s a different thing. Making a record is you standing in an air-conditioned room with water next to you and coffee and you’ve got the lights perfect. And you’re standing as still as you can, and you get to sing it as many times as you want until it’s perfect. [Laughs] Nothing can be more different than a show — unless you’re using [backing] tapes. But I’m proud to tell your audience that we will not be using any tapes anytime soon, so it’s a real rock show. But doing a show is more like communicating the spirit of the song and the music to the audience, and everybody gets into it. And I’m not just gonna stand there and try to be perfect. I’m gonna run all over the place and I’m gonna put on a show.

“As singers get older, I don’t like changing the key of the song because, to me, that makes it sound like a different tune, and I’m not interested in that,” Sebastian explained. “If I’m gonna change a little vocal part in the same key, to me that’s a cooler way of doing it instead of making it into the key of KORN. That works great for KORN.

“I have to sing every day properly and do it for many weeks in order to get my voice to the top of its abilities, and that’s what I’ve been doing. I just played and I had no problems doing all those tunes. I’ve got no problems — knock on wood.”

Bach fronted SKID ROW until 1996, when he was fired. Instead of throwing in the towel, the remaining members took a hiatus and went on to play briefly in a band called OZONE MONDAY.

In 1999, SKID ROW reformed and, after a bit of shuffling over the years, featured a lineup consisting of bassist Rachel Bolan and guitarists Dave “Snake” Sabo and Scotti Hill, alongside drummer Rob Hammersmith and singer Johnny Solinger.

SKID ROW fired Solinger over the phone in April 2015, a few hours before announcing ex-TNT vocalist Tony Harnell as his replacement. Eight months later, Harnell exited the band and was replaced by South African-born, British-based singer ZP Theart, who previously fronted DRAGONFORCE, TANK and I AM I. 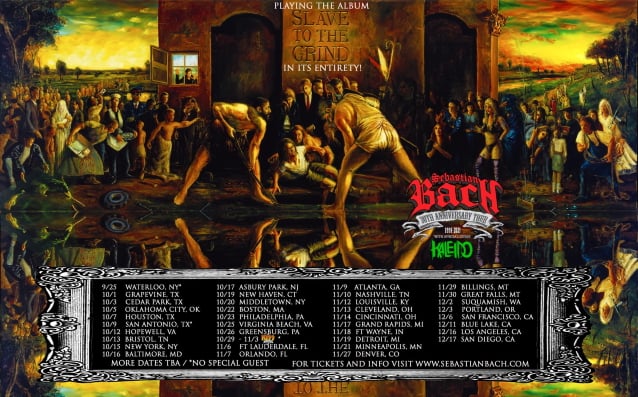 Link to the source article – https://www.blabbermouth.net/news/watch-sebastian-bach-perform-skid-rows-entire-slave-to-the-grind-album-in-philadelphia/

Fan-filmed video footage of Sebastian Bach‘s October 26 performance at The Palace Theatre in Greensburg, Pennsylvania can be seen below. The former SKID ROW singer…

Fan-filmed video footage of Sebastian Bach‘s entire November 23 performance at Toad’s Place in New Haven, Connecticut can be seen below. The setlist was as…

Fan-filmed video footage of Sebastian Bach‘s December 16 performance at The Fonda Theatre in Los Angeles, California can be seen below. The former SKID ROW…

In a recent interview with RadioactiveMike Z, host of the 96.7 KCAL-FM radio program “Wired In The Empire”, Sebastian Bach was asked about the first…