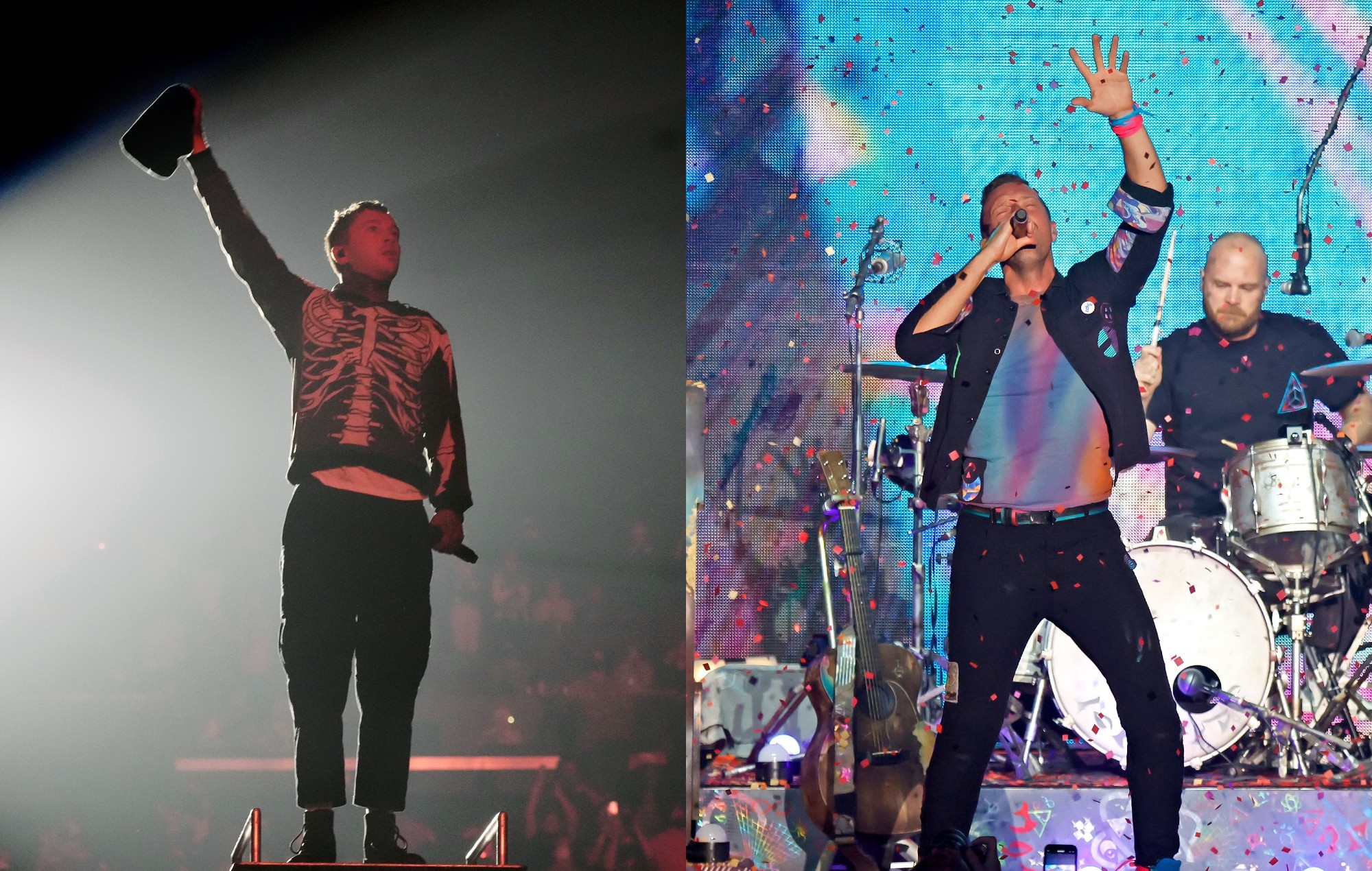 Twenty One Pilots played a show at Los Angeles’ The Forum last night (January 15) and during the gig they covered Coldplay’s ‘Yellow’ – watch footage below.

The show was part of iHeartRadio’s ALTer EGO, with Twenty One Pilots sharing the stage with Imagine Dragons, Måneskin, Willow and Kings Of Leon. During the gig, vocalist Tyler Joseph also took a moment to speak about Coldplay, who played before the duo.

“Do you know how many people I texted saying ‘I’m sorry, I’m busy watching Coldplay open up for me? Do not disturb,” he said. “Can I just tell you, several years ago, Chris Martin called me on my cell phone. It was one of the coolest things anyone in the industry ever did. I think up until that point, I hated everyone – except for Josh (Dunn).

“But he called me and he left me a voicemail – yeah, I ignored him,” he continued. “Unknown number, went to voicemail and I remember where I was when I first heard the voicemail. He said, ‘Hey, it’s Chris Martin from the band Coldplay’, like if he’d just said Coldplay, I wouldn’t have known what he meant. He said, ‘I just want you to know that I love your music, man.’ I texted him, ‘who’s this?’”

“This is just off the cuff and I’m sure they’re long gone, doing their thing, but I wanted them to know they’re big influences on us and it’s an honour to be playing on the same bill as them,” he added.

“i think up until that point, i hated everyone.” pic.twitter.com/6sje1Wai9J

The speech came after Joseph covered a snippet of Coldplay’s 2000 breakout single ‘Yellow’ – watch footage below.

this is where i will be for the rest of eternity this is all i’ve ever wanted in life i can rest peacefully knowing tyler has covered yellow by coldplay pic.twitter.com/vFWpQzHfjj

The band previously covered ‘Clocks’ during last year’s Takeover Tour and in a 2013 interview with MTV, drummer Josh Dunn spoke about how inspiring Coldplay were. “Ever since I first heard them I was hooked. And I don’t know what it was exactly. I think those guys and their creativity and their personalities is something to look up to and be inspired by.”

“You can’t not like Coldplay, I think it’s illegal,” added Joseph.

Elsewhere during their iHeartRadio set, Twenty One Pilots played their now-regular covers of Elton John’s ‘Bennie And The Jets’ and My Chemical Romance‘s ‘I’m Not Okay’ alongside tracks from their recently released album ‘Scaled And Icy’.

The duo return to the UK in June for four headline shows with a Glastonbury-shaped hole currently in their tour schedule.

Twenty One Pilots will play:

The post Watch Twenty One Pilots call Coldplay “big influences on us” and cover ‘Yellow’ appeared first on NME.

A really beautiful tribute. Twenty One Pilots were part of iHeartRadio’s ALTer EGO concert alongside the likes of Måneskin, Kings Of Leon, WILLOW and more.  And…

‘Josh and I are with you,’ assures the singer. Continue reading… Link to the source article – https://loudwire.com/twenty-one-pilots-tyler-joseph-backs-fan-shares-racism-experiences-within-fanbase/

Twenty One Pilots performed an inventive cover of Elton John‘s “Bennie and the Jets” on Sunday as part of their set for AT&T Playoff Playlist.…

For their inaugural Spotify Singles recording, Coldplay covered one of rap’s and one of pop’s biggest stars. On Side A, the band fronted by Chris…