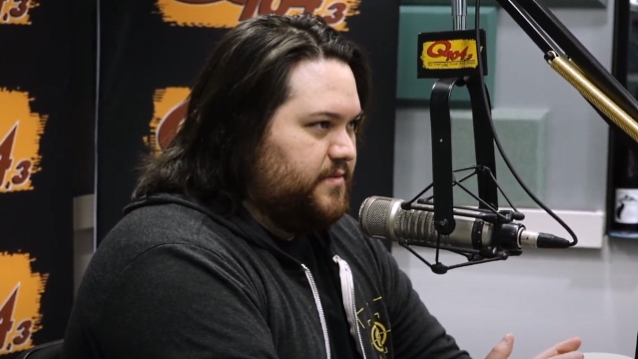 Former VAN HALEN bassist and current MAMMOTH WVH frontman Wolfgang Van Halen has reflected on the passing of FOO FIGHTERS drummer Taylor Hawkins, whose death shook the music world late last month. Speaking to Jonathan Clarke, host of “Out Of The Box” on Q104.3, New York’s classic rock station, he said (as transcribed by BLABBERMOUTH.NET): “I only met [Taylor] once. I saw him live many times, but I met him… He came to a [VAN HALEN] show in San Diego on the ‘A Different Kind Of Truth’ tour in 2012. And he came backstage. And him, my Dad [legendary VAN HALEN guitarist Eddie Van Halen] and I talked for — gosh — it had to be, like, 45 minutes when we had to leave in a half hour; we kind of stayed. It was really cool. I remember… It blew my mind. He told me that him and [FOO FIGHTERS frontman] Dave Grohl had listened to the ‘A Different Kind Of Truth’ album, and he told me specifically they were geeking out on the song ‘China Town’ where I tap the intro with Pop. And they were, like, ‘That’s so awesome.’ And that blew my mind as a 21-year-old person — God, I’m 31 now — that Dave Grohl and Taylor Hawkins had sat and geeked out to me playing bass. That blew my mind.

“He was just such a cool, awesome guy,” Wolfgang added. “I’ve been heartbroken. It’s like a kick in the gut. [He was] way too young, man. I don’t even know what to say.”

Wolfgang also talked about how he and his MAMMOTH WVH bandmates decided to cover FOO FIGHTERS‘ “My Hero” at each concert on their U.S. tour after Taylor‘s passing as a way to honor the late drummer.

“When it happened… Taylor had been a huge champion of my pop’s legacy after he passed; he wore the striped shorts at every show, and he always had an Eddie shirt on,” Wolfgang explained. “He even did that one tribute concert and stuff. I feel like it’s my duty to do… It’s the least I can do; as a musician, it’s the only thing I can do, is to honor him by playing one of their songs.

“We had been playing ‘Them Bones’ [by ALICE IN CHAINS during our set], and it’s a really good time, a really great song, but I think we’re just gonna play ‘My Hero’ for the rest of the tour. It’s the least I can do.”

Wolfgang has repeatedly cited Grohl as one of his “biggest inspirations.” He told Bass Player magazine in a 2021 interview: “When [Dave] started the FOO FIGHTERS, he did everything himself on their first album. I wanted to have a go at that [on MAMMOTH WVH‘s debut], I guess, and I’ve always admired bands like NINE INCH NAILS, where the project emanates from one person and grows from there. That’s kind of how I view it, even though it is still me. I view it more as a band than [a] solo project.”

Earlier this week, MAMMOTH WVH was forced to cancel the remaining six shows of its “Young Guns” tour due to members of the touring personnel testing positive for COVID-19.

In February, Wolfgang told SiriusXM‘s “Trunk Nation With Eddie Trunk” that he has already gathered plenty of material for MAMMOTH WVH‘s sophomore effort.

Link to the source article – https://www.blabbermouth.net/news/wolfgang-van-halen-taylor-hawkinss-death-was-like-a-kick-in-the-gut/

The sudden and unexpected death of Foo Fighters drummer Taylor Hawkins has sent shockwaves throughout the world of music. Just 50 years old, the drummer,…

Tributes to Foo Fighters drummer Taylor Hawkins continued to be paid following his death in Colombia on Friday night. The 50-year-old was mentioned last night during…