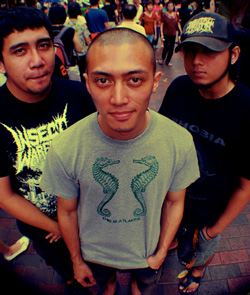 Singapore-based grindcore band Wormrot premiere three new singles via a cinematic music video streaming vai YouTube for you below. The tracks are taken from the band’s forthcoming album “Hiss“, due out in stores on July 08th, 2022.

“‘Weeping Willow‘ tells the tale of a father who will do everything he can to protect his son, whether in this life or the next. The song introduces a new palette of sounds not often associated with grindcore, including nightmarish strings courtesy of 18-year old violinist Myra Choo, illustrating that Wormrot continue to push the boundaries of the genre with their most impressive offering to date.”

“Combining three songs to tell a single continuous story, this trilogy portrays the unnamed protagonist’s vengeance on the corrupt cops who plotted the murder of her lover. We pay tribute to ’70s Japanese crime movies and two of Singapore’s own TV series ‘Triple 9‘ and ‘Crimewatch‘ which we grew up watching.”

Link to the source article – http://www.metalunderground.com/news/details.cfm?newsid=153422

Singapore-based grindcore/deathgrind outfit Wormrot will release their new effort “Hiss” on July 08, 2022, through Earache Records. A new official music video for the first…