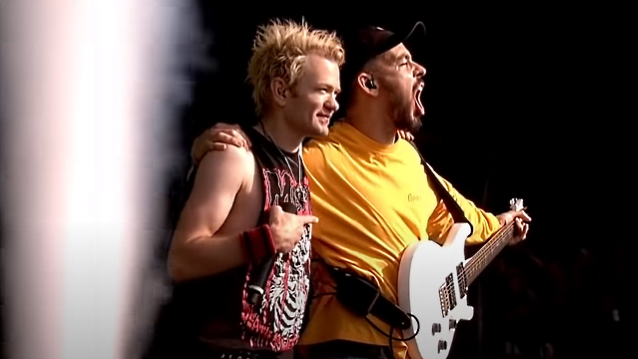 SUM 41 frontman Deryck Whibley, whose band performed a cover of LINKIN PARK‘s “Faint” with Mike Shinoda at the 2018 edition of the Reeding and Leeds festivals, was asked in a new interview with “The Jasta Show” if he would ever consider joining LINKIN PARK as the replacement for the late Chester Bennington. He responded (as transcribed by BLABBERMOUTH.NET): “I think that’s an impossible task; I think those are impossible shoes to fill. I don’t know if they’re ever gonna do anything. I have no idea what that’s gonna look like or who that could be.”

Pressed about whether he would consider joining LINKIN PARK if he was asked to step in and front the band, Deryck said: “That is such a non-possibility that it’s too weird to even, like, sort of ‘joke think’ about it. [Laughs] I don’t know. I don’t know how someone could fill those shoes. I think it would be tough.”

Two months ago, Deryck shared video of SUM 41‘s performance of “Faint” with Shinoda at Reading and Leeds on Instagram, and he included the following message: “A little back story to this performance. We had only decided to perform this song together about a week before the show. We had no rehearsal whatsoever. On the day of the show we (@sum41) were stuck at customs coming into the UK and it didn’t look like we were even going to make it to the show. After hours of waiting we were finally cleared and had to try and make our way through all the concert traffic which ended up getting us to the festival 45 min before our show time. We quickly said hello to @m_Shinoda outside of our tour bus, confirmed we were still going to perform together, spoke very briefly about how the arrangement would go and then scrambled to get ready for our set.”

He continued: “It was such a blast to perform this song, (which is one my favorites) but also nerve racking at the same time. With no rehearsal and only practicing in a hotel room by myself a few nights before the show, all I wanted to do was to come in with the utmost respect and try my best to honor the music, Chester, Mike, @linkinpark band members and the LP family.

“No one will ever come close to @Chesterbe and that’s not what it was about for any of us. It was purely just about the love of the music. As you can see by the smiles on all of our faces we were having so much fun!”

LINKIN PARK has not performed together in public since October 2017, when the surviving members staged a tribute concert in Los Angeles to Bennington. The band has not officially announced whether it intends to carry on following the death of Bennington, who committed suicide in July 2017 at the age of 41.

Three years ago, Shinoda shot down reports that LINKIN PARK was actively searching for a replacement for Bennington. In February 2019, Shinoda took to his Twitter account to write: “Lemme clarify a rumor: we are not looking for a new singer, and if it were to happen organically, I’d be open. Seems pretty clear, yet I guess some folks have a hard time understanding.

“I’m not into predicting the future. The future will happen.”

Shinoda made his comments in an apparent response to how the media covered an interview he gave to Rock Antenne. When asked about the possibility of finding a new singer, Shinoda said: “That’s not my goal right now. I think it has to happen naturally. And if we find somebody that’s a great person that we think is a good personality fit and a good stylistic fit, then I could see trying to do some stuff with somebody… I wouldn’t wanna ever feel like we were replacing Chester.”

Shinoda added: “I know the other guys, they love to get onstage, they love to be in the studio, and so to not do that would be — I don’t know — almost unhealthy. If doing that means that we need to have some other people in the mix in order to do it and do it well, then we would do that… But, like I said before, it has to happen naturally. I’m not running out and putting up ‘vocalist wanted’ posters.”

SUM 41 recently announced plans to release a new double album, titled “Heaven And Hell”. Half of the album, “Heaven”, brings SUM 41 back to its pop punk roots, while the other half, “Hell”, is strictly metal.

Link to the source article – https://www.blabbermouth.net/news/would-sum-41s-deryck-whibley-join-linkin-park-as-replacement-for-chester-bennington-he-responds/

Will we ever get more music from Linkin Park after the 2017 death of Chester Bennington, and if so, what would that future look and…

Mike Shinoda recently spoke about the future of Linkin Park during a Twitch livestream Friday (April 22). The musician revealed there are no plans for…

The surviving members LINKIN PARK have announced plans to start communicating with their fans “a little more regularly” going forward. The band, which has been…

Linkin Park have been inactive since the death of lead vocalist Chester Bennington in July, 2017. The Californian band released its seventh studio album, One More Light,…