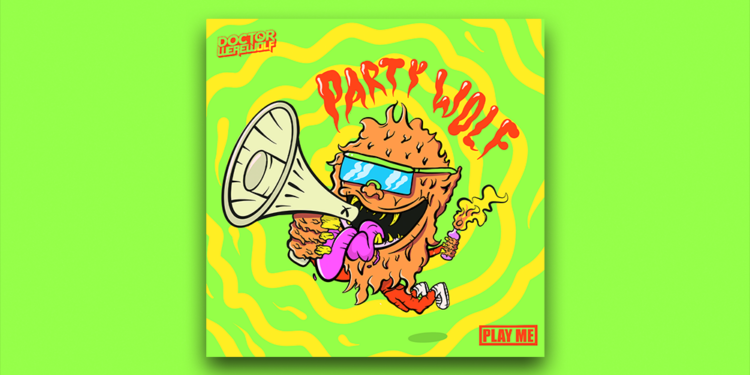 Already a fixture in the Australian bass music scene, Doctor Werewolf has been releasing dubstep and trap since 2010. Starting in 2014, he caught the ears of the likes of Simplify., Dim Mak and Disciple for his dubstep, so he’s become a bit of a mucky muck in that genre as well. It was Play Me label head Reid Speed and Skellytn, however, who discovered Doctor Werewolf’s hidden aptitude for D&B and conscripted him to remix a track on Skellytn’s Neurocomputer Remixed album, which released in May of 2022. After an original track on Bassrush Records’ um-and-comers compilation album The Prophecy: Volume 6, it seems as though it was a no-brainer for Play Me to finally release the Werewolf onto the world in all his Party Wolf glory with his debut D&B EP, out this Friday.

Listening to his remix of Skellytn’s “Neurocomputer” and “Empty the Clip” on the Bassrush comp, the uninitiated D&B fan might think Doctor Werewolf’s style would tend towards serious, crunchy synth neuro. His Aussie and bass fans, however, will know that there’s a heavy party streak in his dubstep and trap work. Even “Fire” feat. MC Shureshock, the teaser track for Party Wolf, was also a bit rough and ready in terms of  synth and style but there’s a vein of dancefloor there, belying the true party underneath. Now that The Party Wolf, is about to be revealed, however, we can categorically say Doctor Werewolf’s party is not going anywhere.

It’s not just the “party” infused titles of the EP and many of its tracks like “Party or Die” and “Party Over Here” that connote pure party, by the way. Following fire is a Tasmanian devil of a track called “Love Take Me Higher” with KineticTheory that’s really just every piece of rave one can stuff into a track: repeating, pitched up vox samples, classic synths, ameny snares, darkstep phrase fillers and the odd floating scratch sample, airhorn, or ragga vox all set over an ambient background. There’s more party in five seconds of this track than many of us see in a whole rave nowadays.

“Party Over Here” is more cohesive than “Love Take Me Higher” in that it follows a less frenetic timeline, but it’s certainly no less bouncy and fun. Channeling early jump up funk guidelines, Doctor Werewolf sneaks in some cheeky dubstep buildups and fart synths (come on now, let’s call a spade a spade) as a callback to the beloved brostep, which is easily the “partiest” era of dubstep. It’s also a segue into closing track, “U n Me,” another scambler of a halftime/dubstep track that radiates pure Ravey McRavepants joy and would be the perfect set closer with literally any genre at the end of a festival.

The opening track, “Party or Die” is our YEDM premiere and is clearly the EP opener for a reason. Again with some sneaky dubstep windups and screams amping up the track, “Party or Die” is the perfect entre into Doctor Werewolf’s World of Party. Once again straddling the neuro and dancefloor worlds, this track winds up the energy to prepare the listener for the madness ahead. Will you come out the other side? The only option, of course, is to “Party of Die.”

As the sonic equivalent to Adventure Time’s Party God character (who, incidentally, is a floating wolf head; they missed an opportunity there), both Doctor Werewolf and Play me are announcing they’re pulling no punches in 2023. We can expect big things from both this year, not the least of which is keeping the party going in both word and deed.

Party Wolf drops this Friday, January 13 on Play Me Records. Click here to pre-order or pre-save.

It’s not often that an artist who started out in dubstep/riddim in the US will do even better when they transition to drum & bass,…

Mr. Deeds (fka SDF-1) can literally trace his rave roots back to the beginning in LA, appearing on flyers as early as 1995. With that…

We all love a good sine wave synth in drum & bass and even in rave music in general. In D&B, we’re partial to the…

Life Is Our Party thanks to Level 8, Archelli Findz and Britt Lari! After the one million streams on ‘No We Can’t Be Friends’, this…

WAVHART have certainly caught Reid Speed’s attention with his unique mix of classic rave and modern jumpy beats and neuro-glitch synths. In fact, since his…