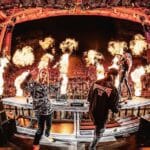 “Frontlines” has remained a staple of Zeds Dead and NGHTMRE‘s sets since the track was first released back in 2016. Arriving on the Canadian bass duo’s debut full-length venture, Northern Lights, the track remains one that draws fans into Zeds Dead’s live sets.

After teasing its follow-up, “Shady Intentions,” over the past year, Zeds Dead and NGHTMRE have reunited to finally release the highly anticipated single. Tori Levett provides vocals on the release, which features expansive soundscapes and swirling instrumentals. “Late at night/Til the sun was up/When we couldn’t sleep,” Levett sings ahead of Zeds Dead and NGHTMRE’s production blend.

“Shady Intentions” arrives as Zeds Dead’s second release of November, following a remix of Nessa Barrett’s “i hope ur miserable until ur dead.” 2021 has proved to be a busy year for the duo, who released its Catching Z’s mixtape in March, “Alive,” in June, and hosted its annual Deadrocks event at Red Rocks Amphitheatre in July. Deadrocks notably kicked off Zeds Dead’s Deadbeats Revival tour; the two have been on the road ever since.

NGHTMRE has also been keeping busy in 2021, releasing an abundance of material over the past several months. This year has seen him release “Falling” alongside KLAXX, “Speak Easy” with Alexandar Smash and Ghostly, “Scars” with Yung Pinch, a remix of ILLENIUM‘s “Heavenly Side,” a Smokepurpp collaboration called “Mosh,” and “Shell Shock” with Zomboy.

Link to the source article – https://dancingastronaut.com/2021/11/zeds-dead-nghtmre-team-up-for-frontlines-follow-up-shady-intentions/

NGHTMRE and Zeds Dead have just unveiled their highly-anticipated collaboration ‘Shady Intentions.’ Featuring vocals by the talented Tori Levett, two of the biggest names in…

Following his 2021 outro, “Shady Intentions” alongside Zeds Dead, NGHTMRE pushes forth with unwavering momentum, bringing to 2022 an all new EP, UNSOUND with features…

Zeds Dead are back once again, this time for a remix of Nessa Barrett’s “i hope ur miserable until ur dead.” The track features Barrett’s…

When Zeds Dead first started out, their remixes were untouchable. Whether you’re talking about “Eyes on Fire,” or “Don’t Let Me Be Misunderstood,” or “Volcano,”…